How Water and Ions Interact with Graphene Oxide Films 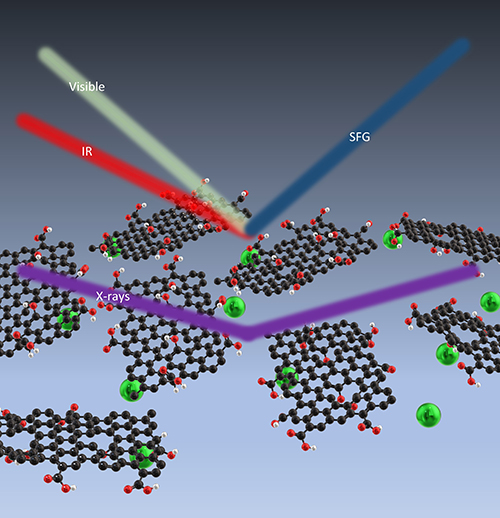 Membranes are useful for separating materials from solutions, and graphene oxide (GO) membranes might prove superior to those made from polymers because of their greater durability and mechanical strength, especially in applications such as removing radioactive elements from contaminated groundwater. One group of scientists has used the U.S. Department of Energy’s Advanced Photon Source (APS), an Office of Science user facility at Argonne National Laboratory, to characterize how water and rare earth elements interact with GO. Their results are published in the journal Carbon. The knowledge could aid in the design of new membranes fit to a particular use.

It is difficult to study the behavior of molecules inside membranes, where aqueous solutions move through narrow channels. So instead, these researchers created GO flakes, using thin films of the material that self-formed at the interface between water and air, allowing them to more easily observe how water and various ions interacted with the GO.

The process of producing GO creates functional groups of atoms, such as carboxyl groups. While pure graphene is naturally hydrophobic, repelling water, the functional groups are hydrophilic and attract water. The functional groups may also carry a negative charge and provide a site where positively charged ions can adsorb to the membrane. In this study, the researchers looked at solutions containing cesium, strontium, and yttrium ions.

They found that the layer of water closest to the GO behaved differently from water that was further away. The nearest layer responds to the charge in the graphene and orients accordingly and is not particularly affected by the adsorbed ions. The next layer of water initially orients to the graphene, but as more ions are adsorbed that orientation is reduced. Understanding such changes in the behavior of water is important because it will affect how ions are transported through the nano-channels of a membrane (Fig. 1).

The researchers also examined the behavior of different ions. They found that yttrium, which as a trivalent ion (having three less electrons than its protons and hence carrying a greater positive charge) has a greater positive charge, was adsorbed more strongly than cesium, which is monovalent, and strontium, which is divalent. Additionally, the yttrium ions caused the GO to crumple as their greater charge density attracted the hydrophilic edges of the flakes. That suggests that people who design GO membranes to separate yttrium or similar ions will have to take into account how those ions will change the structure of the membranes during use.

To get the results, the team used vibrational sum frequency generation (SFG) spectroscopy, performed in their lab, to examine the interface between the GO and the water and to measure the hydrogen-bonding network of interfacial water. They combined this with x-ray experiments performed at the ChemMatCARS beamline 15-ID-C at the APS. They used x-ray reflectivity to measure the electron density of the system, to see the changes that took place as different ions were adsorbed. They also took x-ray fluorescence near-total reflection measurements to get the amount and location of specific elements in the system. While solid samples can be rotated to change the angles at which x-rays strike them, that doesn’t work with liquid samples. This particular x-ray beamline allows researchers to move both the sample and the beam in concert, keeping the liquid flat and the beam focused on the same point while altering the angle.

Armed with an understanding of how water and ions interact with GO, membrane designers will be able to alter the functional groups or change the size and location of hydrophobic and hydrophilic areas on the material to achieve different effects. The researchers are interested in both lanthanides and actinides, and will continue their work with measurements of uranium, thorium, and neptunium.  ― Neil Savage

This material is based upon work supported by the U.S. Department of Energy Office of Science-Basic Energy Sciences, Division of Chemical Sciences, Geosciences, and Biosciences, Early Career Research Program under contract DE-AC02- 06CH11357. ChemMatCARS is supported by the Divisions of Chemistry (CHE) and Materials Research (DMR), National Science Foundation (NSF), under Grant NSF/CHE-1834750. This work made use of the Keck-II facility of Northwestern University's NUANCE Center, which has received support from the SHyNE Resource (NSF ECCS-2025633), the IIN, and Northwestern's MRSEC program (NSF DMR-1720139).  Use of the Advanced Photon Source and the Center for Nanoscale Materials, both Office of Science User Facilities operated for the U.S. Department of Energy (DOE) Office of Science by Argonne National Laboratory, was supported by the U.S. DOE under Contract no. DE-AC02-06CH11357.