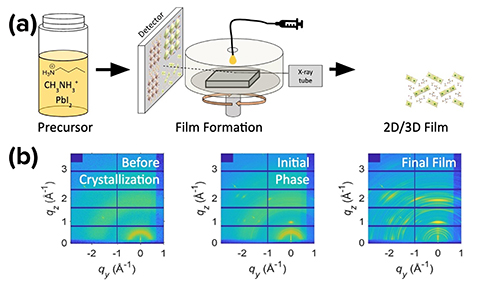 As the demand for solar cells grows, so does the demand for less expensive, more efficient, and more reliable materials to build them. The U.S. Department of Energy describes halide perovskites as low-cost and high-performance with an efficiency comparable to higher-cost materials. Halide perovskites can be fabricated as two- or three-dimensional films by spinning a fluid until the components dissolve in it and form into crystals. Both dimensional-types of crystal films have drawbacks, but they also have complementary strengths: a film composed of mixed-dimensional crystals could be both stable and efficient. However, quantifying the characteristics of the mixed-crystal film depends on understanding the chemical processes occurring during film formation. A team of collaborators hypothesized that the mixed-dimensional crystal film would form differently than either of the single-crystal films. Recent research by this team using the U.S. Department of Energy’s Advanced Photon Source (APS) showed there are two chemical mechanisms occurring during mixed-dimensional film formation, only one of which leads to a highly efficient and stable film. Using their understanding of these mechanisms, the researchers also showed how to fine-tune the composition of the spun fluid to produce these stable and highly efficient halide perovskite films, describing steps for producing new, highly optimal materials for fabricating low-cost, reliable solar cells.

While the term “perovskite” can be used to indicate the mineral originally given that name, calcium titanium oxide, it is also used as a general term to refer to cubic crystalline materials with a similar structure. The fabrication of perovskite films is done with a spin-coating process, in which a precursor solution is applied to a substrate, which is then rotated at high speed. The chemical make-up of the precursor solution dictates the composition of the film. For this research, the team used a precursor solution that included butylammonium iodide, methylammonium iodide, lead iodide, and dimethylformamide. During spinning, multiple chemical reactions occur, which create the crystalline film. First, the entire solution thickens into a concentrated medium called the sol-gel. Then the components of the sol-gel react with each other, producing the solvate, a chemical complex formed from the dimethylformamide solvent and some of the dissolved species, and the perovskites.

The team made multiple types of precursor solution, varying the ratio of butylammonium to methylammonium ions, which allowed them to increase the thickness of the average layer of the resulting two-dimensional crystals within the mixed-dimensional film. During each 5-min. spin-coating process, the team used the APS X-ray Science Division Dynamics & Structure Group’s 8-ID-E beamline at the APS, an Office of Science user facility at Argonne National Laboratory. The beamline was configured as depicted in Fig. 1(a), to perform grazing incident wide-angle synchrotron x-ray scattering measurements of each solution as it crystallized. From the x-ray data, they modeled the crystalline structures necessary to produce the scattering patterns. They additionally analyzed the kinetics presented in the x-ray data, including determining rates of formation for the solvate during fabrication.

The x-ray data showed the team that two mechanisms were operating during the spin-coating process: the solvate mechanism and the orientation mechanism. The two mechanisms occur under different circumstances, differentiated by the average thickness of the resulting two-dimensional crystals within the mixed-dimensional film. This average thickness is dictated by the design of the precursor solution. When the precursor solution is designed so this thickness is larger than five of the lead iodide octahedral units, the solvate mechanism occurs. When this thickness is designed to be three of those units, the orientation mechanism occurs. For thicknesses in between those values, both the mechanisms occur simultaneously. The solvate mechanism produces films of disordered grains, a mixture of solvate and perovskite. The orientation mechanism produces highly ordered perovskite crystals, as shown in Fig. 1(b). Both mechanisms together result in a mixture of poorly ordered two- and three-dimensional crystals of solvate and perovskite.

To be a strong candidate for solar cells, the film must consist of a few mostly-uniform phases with the two-dimensional perovskite crystals oriented perpendicular to the substrate. Thus, the team concluded the solvate mechanism produced suboptimal films for photovoltaic applications, so future fabrication processes should use a precursor solution, which allows the orientation mechanism to dominate. Additionally, the team concluded that one way to pre-select for the orientation mechanism is to use a precursor solution high in methylammonium iodide, to reduce the chance of forming a lead-rich environment, which favors the solvate mechanism. By establishing the existence of the solvate and orientation mechanisms, and clarifying their interactions, the team has demonstrated a quantifiable method for improving halide perovskite films to meet the demand for less expensive and more robust solar cells.  ― Mary Alexandra Agner

This work was supported by the Office of Naval Research (ONR) under grant no. N00014-20-1-2725. This project was supported in part by a fellowship award through the National Defense Science and Engineering Graduate (NDSEG) Fellowship Program, sponsored by the Air Force Research Laboratory (AFRL), the ONR, and the Army Research Office (ARO). L.X.C. is partially supported by the Solar Energy Photochemistry program of the U.S. Department of Energy (DOE) Office of Science-Basic Energy Sciences, through Argonne National Laboratory under contract no. DE-AC02-06CH11357. This work made use of the SPID facility of Northwestern University’s NUANCE Center, which has received support from the Soft and Hybrid Nanotechnology Experimental (ShyNE) Resource (National Science Foundation ECCS-1542205), the MRSEC program (NSF DMR-1720139) at the Materials Research Center, the International Institute for Nanotechnology (IIN), the Keck Foundation, and the State of Illinois through the IIN. This research used resources of the Advanced Photon Source, a U.S. DOE Office of Science user facility operated for the DOE Office of Science by Argonne National Laboratory under Contract No. DE-AC02-06CH11357.