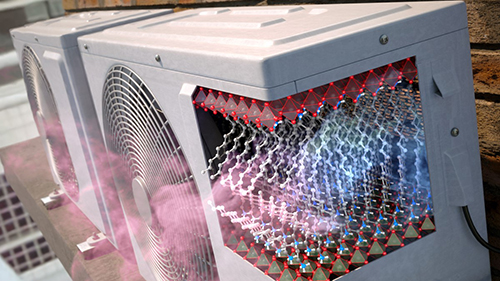 Refrigerators, air conditioners, and heat pumps contribute greatly to global warming by consuming disproportionately high amounts of electricity and leaking polluting refrigerants into the atmosphere. Based on pressure-driven phase transitions in certain solids, barocaloric cooling is one of several new technologies promising improved efficiency and reduced emissions. Through a combination of high-pressure calorimetry and variable temperature and pressure powder x-ray diffraction (PXRD) experiments at the U.S. Department of Energy’s (DOE’s) Advanced Photon Source (APS), scientists showed that order-disorder transitions of hydrocarbons within the organic bilayers of select two-dimensional (2-D) metal-halide perovskites can be tuned to achieve colossal barocaloric effects. These results were supported by in situ x-ray diffraction and spectroscopic experiments, which provided molecular-level insights into the barocaloric effects, including compensation effects among entropy changes, hysteresis, and pressure sensitivity. The comprehensive research established hydrocarbon order-disorder phase transitions in layered materials as a generalizable mechanism for achieving ultralow hysteresis, high pressure sensitivity, and colossal reversible isothermal entropy changes at record-low driving pressures. The work was published in the journal Nature Communications.

Cooling cycles by a refrigerant involve absorbing heat at one location and venting it at another. Each reversible barocaloric cooling cycle begins with an adiabatic or isothermal increase in pressure that induces a phase transition from an expanded, high-entropy phase of a barocaloric material to a contracted, low-entropy phase. Heat released during this exothermic transition is vented outside the enclosure being cooled, returning the solid refrigerant to its original temperature but now at a lower entropy. The pressure is then adiabatically or isothermally decreased to allow the solid coolant to return to its disordered, high-entropy phase.

Since this phase transition is endothermic, it must draw heat from the enclosure being cooled, with the heat being vented in the next cooling cycle. This cyclic cooling approach is most efficient and proceeds at minimal pressure when the reversibility of the barocaloric phase transitions is not hampered by hysteresis.

The researchers in this study showed that the tunability of the layered hybrid perovskites under study can be leveraged to reduce phase transition hysteresis through careful control over the inorganic-organic interface. The PXRD experiments that provided detailed structural information about the phase transitions were performed at the X-ray Science Division Structural Science Group’s beamline 17-BM at the APS, a DOE Office of Science user facility at Argonne National Laboratory.

The search for a new hybrid 2-D perovskite that features a sharp order-disorder transition near ambient temperature with ultralow hysteresis and a high sensitivity to pressure led to the discovery of the 2-D perovskite (NA)2CuBr4 (NA = nonylammonium) whose barocaloric coefficients were among the highest ever measured. In addition to high barocaloric coefficients, ultralow hysteresis, and an extremely sharp transition, a powder sample of (NA)2CuBr4 had the lowest reported reversible pressure for a barocaloric material of 16 bar, which is within the pressure range already accessed by current commercial vapor-compression refrigeration cycles (Fig. 1).

The findings indicated, for instance, that it should be possible to realize phase transitions with even higher entropy changes through functionalization of the organic bilayers and even lower hysteresis through modification of the organic-inorganic interface.

Further, the modular nature and high tunability of 2-D hybrid perovskites can, in principle, be leveraged to also optimize a host of characteristics that are critical to realizing scalable and efficient solid-state cooling technologies, including safety, flammability, and thermal conductivity.   ― Vic Comello

This research was partially supported by the Climate Change Solutions Funds at Harvard University and by the Arnold and Mabel Beckman Foundation through a Beckman Young Investigator grant awarded to J.A.M. and a Beckman Postdoctoral Fellowship to A.H.S. The authors also thank the Korea Foundation for Advanced Studies for a graduate fellowship awarded to J.S. This research used resources of the Advanced Photon Source, an Office of Science User Facility operated for the U.S. Department of Energy (DOE) Office of Science by Argonne National Laboratory.