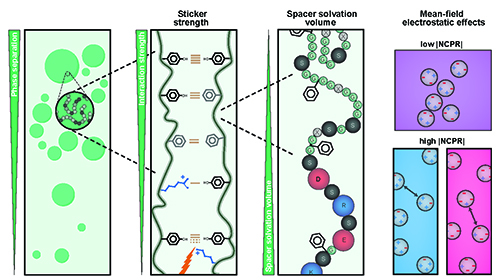 Living cells are amazing little biochemical factories that conduct countless chemical reactions in a cellular soup packed with lipids, proteins, nucleic acids, and ions, keeping them all in their proper places at any given time. Cells maintain this organization even while carrying out complex tasks such as cell division, signaling, transcriptional regulation, and stress responses. One example of this is the careful management of stress granule formation, a process in which membraneless organelles transiently form to control the utilization of mRNA during stress. These granules form and disperse through reversible liquid-liquid phase transitions involving proteins and RNA in the granules. Recent research has demonstrated that RNA-binding proteins in these granules contain intrinsically disordered sequences, called prion-like low-complexity domains (PLCDs), that are critical to regulation of these reversible phase transitions. There is also mounting evidence that these transitions may be disrupted in neurodegenerative diseases, like amyotrophic lateral sclerosis (ALS), in which mutations in PLCD-containing proteins, such as hnRNPA1, have been implicated as a cause of the disease. Recent work that relied on data gathered at the U.S. Department of Energy’s Advanced Photon Source (APS), an Office of Science user facility at Argonne National Laboratory and published in the journal Nature Chemistry aimed to learn more about how these phase transitions are regulated. These findings will provide important information about the causes of diseases like ALS.

Researchers seeking to understand how PLCDs regulate phase transitions in stress granules recently developed a model for the relationships between the amino acids in these domains that is based on their impacts on phase separation of the molecule. This so-called “stickers and spacers” framework has provided a tool for understanding the role of aromatic amino acids, such as tyrosine (Tyr) and phenylalanine (Phe), as stickers that form reversible non-covalent cross links in the PLCDs and mediate phase separation, and other amino acids that act as spacers in the domains and simply connect the stickers. The researchers showed that the spacers were important for generating liquid droplets and that the stickers determine the drive for phase transitions in these domains, but there are still unanswered questions.

To answer these questions, the researchers conducted a study to investigate the phase transition properties of PLCDs among hnRNPA1 family members.

The team first investigated the role of Phe and Tyr as stickers in a series of 848 conserved hnRNPA1 homologous PLCDs. Comparison of the sequences showed that they contained similar amino acid compositions in terms of conservation of the overall number of Phe and Tyr residues. However, it was not clear whether Phe and Tyr are interchangeable or have differing levels of effect on the driving forces for phase separation of PLCDs.

To answer this question, the team engineered one of the PLCDs to make a series of same-length variants with differing Phe/Tyr compositions and then tested the phase separation properties of their engineered variants compared to the original. They made one with all the Tyr residues changed to Phe, another with all the Phe residues changed to Tyr, and then a series of variants with differing amounts of Tyr and Phe. Testing of their phase separation properties demonstrated that both Tyr and Phe are stickers, but that Tyr is a stronger sticker than Phe.

The next series of variants tested the role of arginine (Arg), lysine (Lys), aspartic acid (Asp), and glutamic acid (Glu) in the PLCD sequence as these amino acids had been reported to have different effects depending on the sequence context.

Analysis of variants that tested the relative contribution of each amino acid to phase separation showed that Arg is an auxiliary sticker that is modulated by its sequence context and Lys disrupts the sticker-sticker interactions. Asp and Glu appear to also destabilize phase separation but, like Lys, Asp modulates phase separation through changing solubility rather than as a true sticker.

Further variants identified serine (Ser), glycine (Gly), glutamine (Gln), asparagine (Asn), and threonine (Thr) as important spacers. Depending on the size of their side chains, they can strengthen or weaken the driving force for phase separation.

Overall, this new work shows that not only the networking ability of the stickers but also the solvation properties encoded by the spacers is important in determining the driving force for phase separation. Size exclusion chromatography small-angle x-ray scattering (SEC-SAXS) data obtained at the Biophysics Collaborative Access Team 18-ID x-ray beamline provided information on how the stickers impact the size of the PLCD domains in solution, providing data that was consistent with the model built by the team based on their analysis of how amino acid composition impacts the phase separation properties of the PLCDs.

These data provide important information regarding the physicochemical properties of these PLCDs that may have implications for research on neurodegenerative disease and assist in the future design of intrinsically disorder proteins that have the desired phase separation properties.  ― Sandy Field

Microscopy images were acquired at the Cell and Tissue Imaging Center at SJCRH, which is supported by St. Jude Children's Research Hospital and the National Cancer Institute (grant P30 CA021765). This work was supported by the U.S. National Institutes of Health (grant 5R01NS056114 to R.V.P. and grant R01NS121114 to R.V.P. and T.M.), the Air Force Office of Scientific Research (grant FA9550-20-1-0241 to R.V.P.), the St Jude Collaborative Research Consortium on Membraneless Organelles in Health and Disease (to T.M. and R.V.P.) and the American Lebanese Syrian Associated Charities (to T.M.). This project was supported by grant P30 GM138395 to the Biophysics Collaborative Access Team from the National Institute of General Medical Sciences (NIGMS) of the National Institutes of Health. Use of the Pilatus3 1M detector was provided by grant 1S10OD018090 from NIGMS. This research used resources of the Advanced Photon Source, a U.S. Department of Energy (DOE) Office of Science user facility operated for the DOE Office of Science by Argonne National Laboratory under Contract No. DE-AC02-06CH11357.