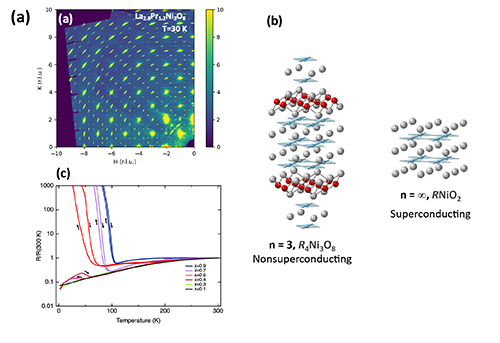 Superconductors are mysterious. By some not fully understood mechanism, electricity flows through superconductors with zero resistance. This phenomenon drives the powerful magnets that underpin magnetic resonance imaging and particle accelerators. Although the temperatures needed for superconductivity are typically near absolute zero, limiting the practicality and application of this technology, there are classes of copper-based high-temperature superconductors that have been eyed as platforms for superconducting technologies. Recently, researchers have discovered that nickel, a neighbor of copper on the periodic table, can also superconduct as an oxide, but so far only as an atomically thin film.  In a search for superconductivity in more three-dimensional bulk nickel oxides, researchers from Argonne’s Materials Science Division explored this material’s structure, electronics, and quantum behavior using data collected at the U.S. Department of Energy’s Advanced Photon Source (APS).  Their findings, published in the journal Chemistry of Materials, may help explain why these crystals do not superconduct and how they might be coaxed into this exotic quantum state.

In the current work, researchers studied a non-superconductive trilayer nickelate, R4Ni3O8, which shares many of the “ingredients” for superconductivity with copper-based high-temperature superconductors. The R in R4Ni3O8 stands for “rare earth,” a group of elements at the bottom of the Periodic Table that includes lanthanum (La) and praseodymium (Pr). What inspired researchers to do the current experiment was a curious observation that, in the ground state, nickelate crystals with R=Pr are metallic while those with R=La exhibit an insulating charge- and spin-stripe order. The latter is an unusual state in which electrons “line up” in rows and stand still rather than moving around freely. Somewhere between Pr4Ni3O8 and La4Ni3O8 the metallic electrons must become stripy and vice-versa.  Such a T=0 transition is called a quantum phase transition, made possible by the same phenomena that underlie that Heisenberg Uncertainty principle. Quantum phase transitions are predicted in cuprate superconductors too, meaning that details of such a transition in the nickelate may shed light on the secrets of cuprates.  Ironically, however, the fact that R4Ni3O8 does not superconduct makes it easier to study this quantum phase behavior, unobscured by superconductivity.

To better understand this potential quantum phase transition between the ground states, the researchers grew a series of crystals with the formula (Pr1-xLax)Ni3O8, (x=0.1, 0.3, 0.4, 0.45, 0.5, 0.7, and 0.9). They performed powder x-ray diffraction at the APS X-ray Science Division (XSD) Structural Science Group’s x-ray beamline 11-BM-B, while collecting single-crystal x-ray diffraction data at the XSD Magnetic Materials Group’s beamline 6-ID-D (Fig. 1), both at APS, an Office of Science user facility at Argonne National Laboratory. These x-ray experiments most directly probe the existence and behavior of the charge stripes. The researchers also measured the crystals' heat capacity, magnetic susceptibility, and electric resistivity, among other characteristics.

Together, these magnetic, transport, thermodynamic, and scattering measurements helped the researchers construct an electronic and magnetic phase diagram of the transition from the metallic to the spin-stripe order states. They also found evidence that there is indeed a T = 0 transition occurring when x = 0.45, give or take.  The authors propose two possible models for (Pr1-xLax)Ni3O8 that are consistent with the observed x dependence of its competing phases: an electronically inhomogenous system or a homogenous system. Both scenarios offer interesting science, with the former serving as a way to explore how disorder impacts quantum transitions, and the latter potentially providing a clean quantum critical point at the phase boundary.  The evidence seems to weigh in favor of the inhomogeneous scenario, but the jury is still out.

Many scientists believe that we have only scratched the surface of what is possible with superconductivity. Overcoming temperature limitations won't be easy, but basic research into the fundamental physics behind high-temperature superconductivity―like that described in this study―puts scientists on the path to make a quantum leap in superconductor technology.   ― Erika Gebel Berg