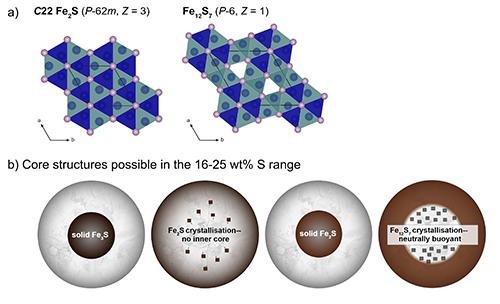 Although the cores of rocky planets in our Solar System are expected to be predominantly composed of iron with some light element component, including sulfur (S), silicon (Si), oxygen (O), carbon (C), and hydrogen (H), they may differ widely in their structure, oxidation state, and bulk composition. Experimentally determined iron (Fe)-alloy phase relationships are critical to characterizing the evolution of planetary cores. In this work, published in the journal Geochemical Perspectives Letters, the researchers used the U.S. Department of Energy’s Advanced Photon Source (APS) to explore Fe-FeS phase relations at high pressure and temperature and in the 16-25 wt. % sulfur range to outline how core composition and structure can be determined for the four inner planets and exoplanets.

Sulfur is thought to be a primary light alloying candidate in planetary cores based on its cosmochemical abundance and alloying capability with iron at high pressures and temperatures. Metal-silicate partitioning experiments and cosmochemical models suggest that Earth’s iron core includes an average of about 2 wt. % sulfur. The cores of the other inner planets are less known, but overall, they range in pressure from 6-360 GPa and composition from 1.5-25 wt. % sulfur. It is likely that the cores of extrasolar planets display even greater variations.

To decipher how planetary cores crystallize, the authors of this paper constructed an Fe-FeS phase diagram between 100 and 125 GPa in the 16-25 wt. % S range. The researchers used powder and single-crystal x-ray diffraction techniques during laser heating and after temperature quenching at the GeoSoilEnviroCARS beamline 13-ID-D of the Advanced Photon Source. They performed two high-P-T experiments in which they found Fe2S (22 wt. %S) and Fe12S7 (25 wt. %S) co-crystallizing at pressures up to 125 GPa.

While seismic data of the Earth and Martian cores highlight the variety of core solid-liquid structure and density in our own solar system, it is likely that a wider variety of planetary cores exist beyond. Density differences between the crystallizing phases and liquid govern the structures of planetary cores. Given this work, several crystallization models are possible for cores with 16-25 wt. % sulfur. Notably, on the S-rich side of the Fe2S-Fe12S7 eutectic, Fe12S7 would be the first to crystallize, forming a gravitationally buoyant snow that mixes back into the liquid rather than forming a stable inner core. Then, at low enough temperature to crystallize Fe2S and Fe12S7, the denser Fe2S may settle, eventually creating an Fe2S-rich inner core.

Recent data from the InSight mission to Mars indicates that its core is fully molten and makes up about 50% of the planet’s radius, suggesting that it must have a relatively high sulfur content. Previous work suggests that the stability of Fe3S and the Fe2S phase reported in this work extends down to Martian core pressures. Broadly applying the Fe3S - Fe2S phase relations reported here, the sulfur composition of the Martian core must lie on the S-rich side of the Fe-Fe3S eutectic, so that the Fe3S is crystallizing from a more Fe-rich liquid, or the S-rich side of the Fe3S-Fe2S eutectic, such that Fe2S is crystallizing from a more Fe-rich liquid. Core compositions more sulfur rich than Fe2S are geochemically unlikely.

This paper characterizes the iron and sulfur phase relations in the 16 to 25 wt. % S compositional range, using in situ x-ray diffraction experiments in the laser heated diamond anvil cell at pressures up to 125 GPa—conditions expected for the interior of a Venus-sized exoplanet. The identification of Fe2S, and the novel Fe12S7 at these conditions, reveals a wide variety of core structures are possible with minor changes in sulfur content for S-rich planetary cores.   ― Dana Desonie

GeoSoilEnviroCARS is supported by the National Science Foundation (NSF)-Earth Sciences (EAR - 1634415). Use of the COMPRES-GeoSoilEnviroCARS gas loading system was supported by COMPRES under NSF Cooperative Agreement EAR-1606856 and by GeoSoilEnviroCARS through NSF grant EAR-1634415 and U.S. Department of Energy (DOE) grant DE-FG02-94ER14466. This material is based upon work supported by a NSF Graduate Research Fellowship to C.C.Z. This work was also supported by the NSF by grant EAR-1651017 to AJC. This research used resources of the Advanced Photon Source, a U.S. DOE Office of Science User Facility operated for the DOE Office of Science by Argonne National Laboratory under Contract No. DE-AC02-06CH11357.