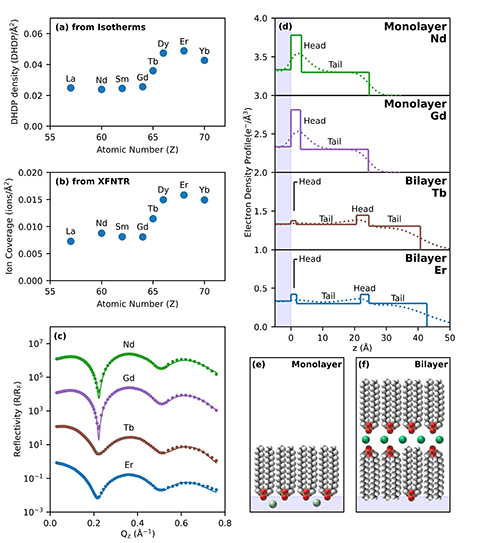 Lanthanides are a class of rare-earth metals perhaps best known for being part of the sets of chemical elements that are “out of order” on the periodic table. Though less familiar than other elements, lanthanides are used to produce a wide range of industrial and digital products, including magnets, batteries, lasers, and capacitors. As these products become more and more integrated in our daily lives, the demand for lanthanides has increased much faster than their supply. Surprisingly, though they are called rare-earth metals, lanthanides are relatively common in the Earth’s crust. What makes them rare is how difficult it is to extract them from rocks and then separate the different types of lanthanides from each other. The usual technique is to dissolve lanthanide-containing rocks in acids and then mix the solution with oil and surfactant until the lanthanide ions are transferred to the oil. However, this process is not very environmentally friendly and has to be repeated many times to approach industrial-level purity. To make this process more efficient, a team of researchers from Northwestern University employed a variety of synchrotron x-ray techniques at the U.S. Department of Energy’s Advanced Photon Source (APS) to learn how and why lanthanides collect at the water’s surface by taking a closer look at what types of lanthanide ions form surface layers and under what conditions. Their research, published in the journal Applied Materials & Interfaces, has the potential to help make lanthanide extraction more efficient and environmentally friendly.

Previous research showed that lanthanide extraction can be made more efficient by the creation of a double layer of surfactant in a lanthanide mixture. Exactly why and how a bilayer formation occurs, and how it is related to the surfactant, is less clear. To solve this problem, researchers conducted x-ray experiments with lanthanide solutions at the ChemMatCARS 15-ID x-ray beamline of the APS at Argonne National Laboratory. The team spread dihexadecyl phosphate (DHDP), a common industrial surfactant, over a lanthanide-water solution at a variety of densities. They then compressed the solution to controlled amounts of total area and surface pressure and used an x-ray fluorescence technique to measure the surface concentration of fluorescing lanthanide ions. The technique works by directing x-rays at the surface of the solution at a very small angle such that only the surface is illuminated, allowing for the lanthanide ions to be detected and measured. X-ray reflectivity was used to determine the electron density profiles normal to the interface, and grazing incidence x-ray diffraction to determine the in-plane structure and ordering of ions and lipids at the interface.

This research suggests that the efficiency of extraction processes can be enhanced by ensuring the conditions of a bilayer formation of surfactant that separates the heavier lanthanides. Once separated, it potentially becomes much easier to more efficiently transform the heavier lanthanides into their desired industrial form.   ― Alicia Surrao