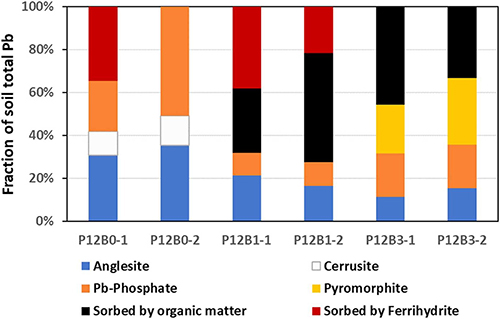 Lead contamination in soil poses a serious threat to human health, especially for children. Conventional lead-remediation methods that involve physical removal of lead-contaminated material or site stabilization are expensive, limiting their practical use. As alternatives, researchers have recently explored plant-based bio-remediation technologies. These include applying biochar, a pyrolytic black carbon derived from thermal conversion of plant biomass in an oxygen-limited environment, as a soil additive. Studies have suggested that biochar can efficiently immobilize lead in soil and water, and biochar also tends to have significant positive effects on plant growth due to its ability to improve soil physical properties, nutrient status, pH, and soil organic matter content. Although there have been many studies on the effects of lead toxicity and biochar on soil microbes, the interactive effects of these two factors at low doses of biochar have been difficult to discern due to complex relationships among biochar, plants that reside in the soil, and the soil microbial community. To better understand these interactions, researchers performed a variety of experiments, including some that used the U.S. Department of Energy’s Advanced Photon Source (APS). Their findings, published in the Journal of Hazardous Materials, show that biochar could play a valuable role in shaping healthier soil microbial communities by both sequestering lead through sorption and the formation of insoluble minerals, and serving as microhabitats for various microbial species.

As a model system, the researchers grew banana plants in sandy soil spiked with three different concentrations of lead (Pb): none, 400 mg/kg (the U.S. EPA limit for lead in bare soil of play areas), and 1200 mg/kg (the U.S. EPA standard for lead in non-play areas). To each of these soils, they added concentrations of either 1%, 3%, or 0% biochar derived from pyrolyzing bamboo stems. They worked with 12 pots of each combination of lead and biochar in the soil.

After five months, the researchers took soil samples from three pots for each combination of lead and biochar. They used genetic sequencing to determine which microbial species were living in the soil. They also used the Materials Research Collaborative Access Team (MR-CAT) 10-ID x-ray beamline at the APS to perform x-ray absorption near edge structure (XANES) studies to determine what lead-based compounds had formed in the soil. (The APS is an Office of Science user facility at Argonne National Laboratory.)

In the pots that mixed lead-contaminated soil with biochar, the biochar appeared to alleviate lead toxicity and increased the diversity of the microbial community, boosting the populations of several species including Alkanibacter, Muciaginibacter, Burkholderiaceae, and Beggiatoaceae.

The researchers suggest a couple of different mechanisms for these effects.

First, the XANES experiments suggest that biochar not only increased sorption of lead by biochar, but also induced the formation of a mineral known as pyromorphite (Pb5(PO4)3Cl/OH), presumably due to biochar’s ability to increase the soil pH and water-holding capacity (Fig. 1). Pyromorphite is several orders of magnitude less soluble than the most commonly found lead-based minerals in soils, such as anglesite and cerussite. In addition, biochar may also serve as a microhabitat niche and could even have been an energy source for microbes, allowing some bacterial species to thrive.

In addition to these positive qualities, biochar also increased the vigor of the banana plants growing in the soil to which it was added. The researchers suggest that this phenomenon may partly be due to the enhanced growth of soil microbes involved in nitrogen cycling.

Together, the researchers suggest, these results support biochar as a potentially effective and inexpensive way to remediate lead contamination in soil while also improving soil microbial health. They propose that further research should focus on gene activity in soil microbes to better understand their response to lead toxicity and their role in nitrogen and carbon cycling.  ― Summer Allen