Moving from the Deep Interior of Earth toward Volcano Prediction 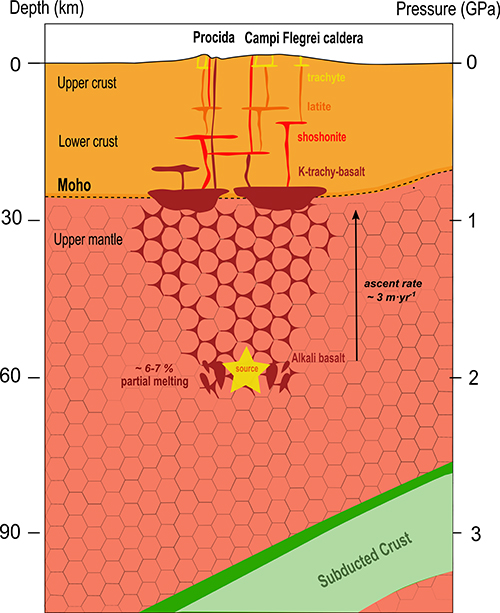 In order to predict volcanic eruptions, one must understand the physical behavior of magma at the depth where it forms. Magma is the molten rock ejected by volcanoes when they erupt. It rises from the interior of the Earth, slowly permeating the surrounding rocks, until the pressure rises too high and molten rock spews from the volcano (Fig. 1). Magma can be thin or thick, sticky or smooth, gaseous or not. In general, more-viscous magmas produce more-violent explosions. Much depends on where a volcano is located. Campi Flegrei, for example, is a large, active volcano west of Naples, Italy, that erupts catastrophically approximately every 20,000 years. It has also had less dramatic eruptions as recently as 1538. Around 550,000 people live near the Campi Flegrei volcanic field, and the volcano is currently recharging, with magma gradually refilling its reservoirs. A team of researchers studying the area used the unique facilities of the U.S. Department of Energy's Advanced Photon Source (APS) to understand how magmas behave in volcanoes that, like Campi Flegrei, sit over cracks in the Earth where a piece of ocean crust slides under a continent. Their findings, published in the journal Scientific Reports, will allow scientists to better understand Campi Flegrei and similar volcanoes, potentially protecting people around the world from unexpected volcanic eruptions.

Basalt is a common volcanic rock. It’s usually about 50% silicon oxide, 10% iron oxide, and 15% aluminum oxide, with the remaining 25% a variable mix of calcium oxide, magnesium oxide, and other elements. But the properties of the basalt can change depending on that mix of elements. The magma beneath Campi Flegrei is alkaline basalt, with about 9% magnesium oxide and almost twice as much sodium and potassium as other basalts. This makes them less dense and less viscous, and likely to rise more quickly than other basalts. Alkaline basalts have not been well studied. A team of researchers from La Sapienza University of Rome, Ehime University (Japan), the University of Bayreuth (Germany), and HPCAT-XSD at the APS, an Office of Science user facility at Argonne National Laboratory, set out to fill that knowledge gap using the VX-3 Paris-Edinburgh press at the HPCAT-XSD 16-BM-B x-ray beamline at the APS.

Beamline 16-BM-B takes advantage of the APS’s very high photon flux and bending magnet white beam x-ray spectrum to do the difficult job of illuminating liquids at high pressures and temperatures representative of natural magmas. The V-X Paris-Edinburgh press on this beamline can maintain the molten rock sample at pressures as high as 7 gigapascals and temperatures of 2,300 K for more than 24 hours, allowing a full run of experimental viscosity data to be collected in one long session on a single sample. The combination of the Paris-Edinburgh press and the APS high photon flux makes HPCAT the only facility in the world capable of experiments to determine the viscosity of synthetic magmas.

In addition to the high temperature and pressures required for the experiment, the semi-liquid state of natural magmas also complicates the investigation of its atomic structure. Classic x-ray diffraction techniques use the patterns created by many, many x-rays passing through a regular repeating crystal to figure out the structure. Liquids, due to their amorphous nature, generally do not have a repeating crystalline structure. So, these researchers used multi-angle energy dispersive x-ray diffraction to collect diffraction patterns from 10 different angles, and then analyzed the data with a software package developed at HPCAT-XSD specifically for structural analysis of high-pressure liquids.

Knowing the viscosity of the magma that forms just beneath Campi Flegrei allowed the researchers to estimate that the magma ascends 2.5 meters to 3 meters per year, leading them to hypothesize that the source of the magma is about 60 kilometers deep. This will help further geochemical and geophysical models of the volcano to be implemented and integrated with the experimental viscosity data, thus improving the tools used to predict dangerous eruptions.   ― Kim Krieger