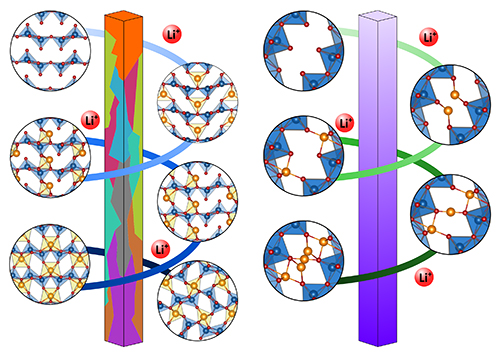 Lithium-ion (Li-ion) batteries are the best electrical energy storage systems for mobile phones, laptop computers, power tools, and other portable consumer electronics devices due to their numerous advantages over other current rechargeable battery chemistries, most especially their long cycle life and intrinsically high energy densities. Challenges remain, however, in adapting this technology for advanced medical, aerospace, smart grid, and transportation applications in part because they all require significantly higher energy capacities. An international team of researchers recently investigated vanadium pentoxide (V2O5), a promising alternative cathode material to avoid the critical element cobalt, by comparing the electrochemical and mechanical performance of electrodes made from two of its structural motifs, two-dimensional layered α-V2O5 and one-dimensional tunnel-structured ζ-V2O5. While the structure on atomic scale is very different, the shape and size of the nanowires forming the electrode material was similar. By evaluating electrodes fashioned according to the same specifications, the researchers were able to disentangle the roles of differences in structure and atomistic diffusion pathways from other factors affecting performance. The researchers pinpointed the causes of the differences seen in performance during charging and discharging using operando synchrotron x-ray diffraction (XRD) measurements, ex situ scanning transmission x-ray microscopy (STXM), and phase-field modeling. The high-resolution operando synchrotron XRD patterns were collected at the U.S. Department of Energy’s Advanced Photon Source (APS), while the STXM measurements were made at the Canadian Light Source. These results were published in the Proceedings of the National Academy of Sciences of the United States of America.

During Li‐ion battery operation, Li+ ions progressively fill the interstitial spaces of the cathode (lithiation) during discharge and vacate (delithiation) as the battery recharges. Ideally, a fully lithiated cathode material should achieve a large energy capacity by holding Li+ ions and releasing them easily and quickly during delithiation, all with low  and completely reversible changes to intercalation host structures to maintain a high energy capacity and minimum internal stresses upon repeated cycling. The researchers compared the electrochemical and mechanical performance of the two different structural ordering of the same material  used in coin cells. The so-called α-V2O5 is the most common structure, while ζ-V2O5 is a metastable outsider, but still stable up to 500oC.

The researchers found significant differences in voltage hysteresis, capacity retention, and other characteristics when the two structures were electrochemically cycled. Operando multibeam optical stress-sensor experiments and phase-field modeling revealed that ζ-V2O5exhibited substantially lower stress accumulation in comparison to α-V2O5. ζ-V2O5 also showed about 79% capacity retention after 100 cycles while the capacity retention for α-V2O5 was only 48%. Furthermore, ζ-V2O5displayed an excellent rate capability and maintained a high capacity of 320 mAh/g after 555 cycles.

Operando synchrotron XRD studies performed at the X-ray Science Division Structural Science Group’s beamline 17-BM of the APS concurrently with electrochemical cycling allowed the researchers to examine the dynamical evolution of the two structures as a function of Li-ion concentration, revealing that distinctive lithiation mechanisms operated in these two structures. Lithiation/delithiation cycling caused a series of intercalation-induced phase transformations in α-V2O5 that were ultimately irreversible beyond x > 1 in LixV2O5. In contrast, ζ-V2O5lithiation/delithiation proceeded through reversible reordering of Li+ ion occupancies in the interstitial sites with complete preservation of the tunnel framework (Fig. 1). Ex situ STXM imaging of ensembles of lithiated particles coupled with phase-field modeling carried out at beamline 10ID-1 of the Canadian Light Source confirmed the significant phase heterogeneities in α-V2O5and the easy homogeneous lithiation of ζ-V2O5 along its 1D tunnels.

The absence of distortive phase transitions facilitated the uniform diffusion of Li+ ions across a large voltage window for the metastable ζ-V2O5structure, which mitigated against capacity fade. This study has demonstrated the impact of the atomic structure of identical materials guiding to the future material design. The expansion of the one-dimensional tunnel through substitutional doping would allow for diffusion in and between tunnels. Also, optimization of particle geometries and the design of mesoscale architectures could enable more effective utilization of the active material, thereby realizing the full promise of the desirable material properties accessible by ζ-V2O5.  ― Vic Comello

This work was supported by Award No. A-1978-20190330 from the Welch Foundation and by Dimien, Inc. under National Science Foundation (NSF) Small Business Technology Transfer Grant No. 1938515 and New York State Energy and Research Development Authority Program Opportunity Notice No. 3585. D.S. acknowledged support from a NSF Graduate Research Fellowship under Grant No. 1746932. B.-X.X. acknowledged the German Science Foundation for funding under Project No. 398072825. M. Pharr acknowledged support from the NSF under Award No. DMR-1944674. A portion of the research was performed at the Canadian Light Source (SM beamline, 10ID-1). This research used resources of the Advanced Photon Source, a U.S. Department of Energy (DOE) Office of Science User Facility operated for the DOE Office of Science by Argonne National Laboratory.