Revealing the Secrets of the Shark's Cartilaginous Skeleton 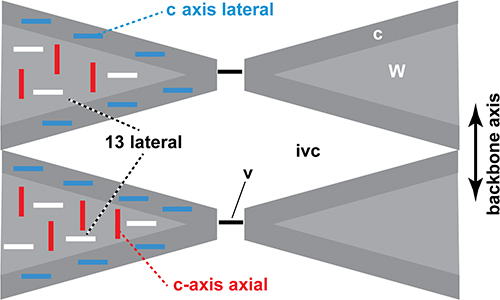 Sharks have been swimming the seas since ancient times, endlessly swishing their tails side to side, propelling them through the oceanic depths. As a shark swims, the vertebrae in the shark's tail compress one way, and then the other, from left to right, subjecting the vertebrae to intense strain. Curiously, the shark's skeleton is made, not from bone like many of its fishy and land-based friends, but from cartilage. Scientists are interested in learning more about the biological microstructures that allow cartilage to accommodate the shark's swimming mechanism, not simply to understand its biomechanics but possibly to learn more about human bone and joint disease. In this study, researchers collected data via multiple imaging modalities using high-brightness x-rays from the U.S. Department of Energy’s Advanced Photon Source (APS). The end result, published in the Journal of Medical Imaging, is a three-dimensional (3-D) map revealing how substructures prevent degradation of the vertebrae.

The vertebrae of the shark's backbone undergo enormous compressive strain during swimming. Yet the vertebrae persevere through millions of loading cycles in spite of cartilage's lack of a biological repair mechanism like that of bones. The key to this resilience rests with the centrum, the central portion of the shark vertebrate, which contains the mineral bioapatite and is organized similar to bone. In the blue shark―the subject of study in this article―the fundamental architecture of the centrum is far from basic, consisting of an hourglass-shaped double cone, with walls supported by four thick wedges separated by gaps. How strain is accommodated during the alternative pattern of compression and tension that occurs during swimming hasn't been well understood. In a novel approach, the researchers in this study used energy dispersive diffraction (EDD) to map the 3-D spatial organization and texture of bioapatite in the blue shark centrum.

This study examined a complete abdominal vertebra of a blue shark, which had centra measuring 24.3 mm in diameter and 12.7 mm in height. The team studied the whole vertebra by lab microCT and EDD, while thin slices were used for fluorescence mapping and synchrotron microCT. The fluorescence mapping experiments at x-ray beamline 8-BM-B, which is operated by the Argonne X-ray Science Division (XSD) Microscopy (MIC) Group, involved focusing the beam of 15.3-keV x-rays to a 20-micrometer diameter using Kirkpatrick-Baez mirror optics. Meanwhile, at beamline 2-ID-E, also operated by the MIC Group, Fresnel optics produced a 0.4- to 0.45-micrometer-diameter beam of 13.7-kEV photons for higher resolution fluorescence mapping. At beamline 6-BM-B, operated by the XSD Materials Physics & Engineering Group, the researchers performed EDD mapping in 50% ethanol. The various methods yielded an unprecedentedly detailed look at shark centra microstructures, offering clues as to their incredible durability (Fig. 1). MicroCT at beamline 2-BM, operated by ***, revealed the micrometer-level structures within the centrum. The bottom line is that the centra consist of a hierarchy of structures spanning multiple spatial scales. 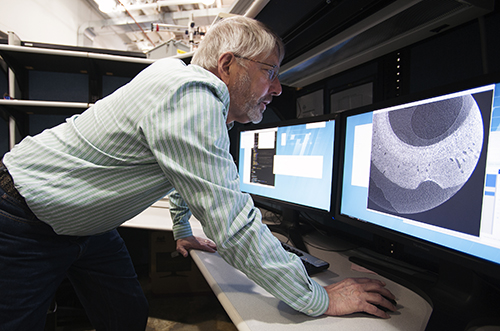 Laboratory microCT provided evidence that the centra's cones have a higher mineral density than the wedges. X-ray fluorescence mapping honed in on where potassium (P), calcium (Ca), and zinc (Zn) was located within the centra structure. The researchers observed honeycomb-like structures of heavily mineralized materials, micro-rods running parallel to cartilage canals, and pockets of fluid. Many aspects of the centra's structure were similar to those in bone. Whether the shark honeycomb is similarly elastic compared to bone remains unclear, but the researchers suspect the hierarchy of structures in shark centra may indicate why they are more compliant than bone centra.

These findings support the use of 3-D EDD methods for the further study of other mineralized tissue samples. The hope is that this approach could potentially be used to study osteoporosis in human bones or how cartilage functions (and breaks down) in joints.  ― Erika Gebel Berg

The lab microCT data were collected at the Duke University Shared Materials Instrumentation Facility (SMIF), a member of the North Carolina Research Triangle Nanotechnology Network (RTNN), which is supported by the National Science Foundation, NSF, (Grant No. ECCS-1542015) as part of the National Nanotechnology Coordinated Infrastructure (NNCI). Beamline 6-BM-B, APS, is supported by COMPRES, the Consortium for Materials Properties Research in Earth Sciences under NSF Cooperative Agreement EAR-1661511. Argonne National Laboratory’s work was supported by the U.S. Department of Energy (DOE) Office of Science-Basic Energy Sciences, under contract DE-AC02-06CH11357. This research used resources of the Advanced Photon Source, a U.S. DOE Office of Science user facility, operated for the DOE Office of Science by Argonne National Laboratory under contract no. DE-AC02-06CH11357.