Is a New Phase of Mineral a Clue to Internal Dynamics of a “Super Earth”? 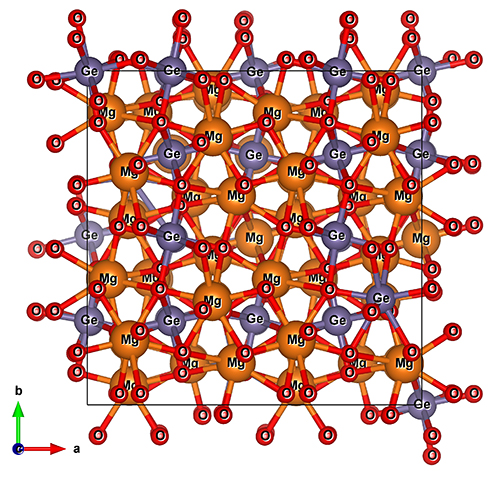 Astronomers have discovered thousands of planets orbiting other stars. Many of these planets are rocky like Earth, but considerably bigger. Researchers wonder if these “Super Earths” could support life. One of the requirements for life as we know it is plate tectonics, the slow churning of a planet’s interior that renews the surface, regulates the carbon cycle, and keeps liquid water available. Now, researchers have used the U.S. Department of Energy's Advanced Photon Source (APS) to understand how common silicate minerals would behave under the incredible pressures deep in the mantle of a Super Earth. Their findings, published in the Proceedings of the National Academy of Sciences of the United States of America, reveal a new phase of mineral never before reported.

Magnesium silicates are common minerals that comprise the bulk of rocky planets. Geophysicists have a fairly good understanding of how magnesium (and iron) silicates behave inside of the Earth: They form a mineral phase called bridgmanite in the Earth's deep mantle and this defines a major structural boundary in our planet. But under the extraordinarily high pressures in the mantle of a Super Earth, researchers suspect magnesium and iron silicates would form a mineral phase with a structure similar to that of thorium phosphide. Unfortunately, we have no way to reproduce those pressures in the lab.

However, geophysicists can study magnesium germanates instead. Germanium is chemically akin to silicon, sitting directly beneath it in the periodic table. But its larger size makes it more easily compressible, and magnesium germanates pass through the same phase transitions as magnesium silicates do, at lower pressures.

A team of researchers from the Carnegie Institution for Science, Princeton University, University of Nevada Las Vegas, and The University of Chicago used a laser-heated diamond anvil to compress magnesium germinate (Mg2GeO4) to pressures as high as 275 gigapascals (GPa). X-ray beamlines at the APS operated by the GeoSoilEnviroCARS collaborative access team (beamline 13-ID-D) and the Argonne X-ray Science Division's HPCAT-XSD (beamline 16-ID-B) were both used for various parts of the experiment. This was the first time x-ray diffraction was performed in situ at such high pressures on a germanate, and it was done in remote access mode using NoMachine’s NX software at HPCAT-XSD.

There was another surprise, too. The structure of the material became somewhat disordered, with magnesium atoms swapping position interchangeably with germanium atoms (Fig. 1).

In 6-coordinated minerals, magnesium is 25% larger than germanium. But it is possible that the extremely high pressures compact the magnesium and germanium atoms so much that they become close to the same size and able to swap in and out of each other’s position in the crystal matrix. The unusual 8-coordinated atomic structure causes a very significant increase in density of the mineral of about 2.4%, which may affect the behavior of the deep mantle: compression and shear wave propagation in material is dependent on material density. And the disordered nature of the crystal may lead to enhanced miscibility of chemical components and impurities at these high pressures. Both higher density and higher miscibility could lead to a planet with very different internal characteristics and plate tectonics than the Earth we know. It’s also possible that other oxide minerals adopt a similar 8-coordinate structure at Super Earth pressures.

The next step in this research is to add iron to the magnesium germinates and run the same experiments, checking to see whether the presence of iron changes the mineral structure.

This research was supported by the National Science Foundation (NSF)—Earth Sciences (EAR-1836852). R.D. is grateful for support from the Carnegie Endowment. GeoSoilEnviroCARS is supported by the NSF—Earth Sciences (EAR-1634415) and the U.S. Department of Energy (DOE) Geosciences (DE-FG02-94ER14466). HPCAT-XSD operations are supported by DOE National Nuclear Security Administration Office of Experimental Sciences. R.E.C. gratefully acknowledges the Gauss Centre for Supercomputing e.V. (https://www.gauss-centre.eu/) for funding this project by providing computing time on the GCS SupercomputerSuperMUC-NG at Leibniz Supercomputing Centre (LRZ,http://www.lrz.de). This research used resources of the Advanced Photon Source, a U.S. DOE Office of Science user facility, operated for the DOE Office of Science by Argonne National Laboratory under contract no. DE-AC02-06CH11357.

The Carnegie Institution for Science press release on this subject can be read here.