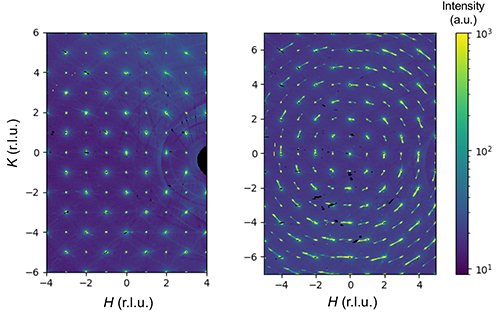 The original University of Minnesota news brief can be read here.

In a surprising discovery, an international team of researchers, led by scientists in the University of Minnesota Center for Quantum Materials using two U.S. Department of Energy (DOE) national user facilities including the Advanced Photon Source, found that deformations in quantum materials that cause imperfections in the crystal structure can actually improve the material’s superconducting and electrical properties. The groundbreaking findings could provide new insight for developing the next generation of quantum-based computing and electronic devices. The research was published in Nature Materials.

“Quantum materials have unusual magnetic and electrical properties that, if understood and controlled, could revolutionize virtually every aspect of society and enable highly energy-efficient electrical systems and faster, more accurate electronic devices,” said study co-author Martin Greven, a Distinguished McKnight Professor in the University of Minnesota’s School of Physics and Astronomy and the Director of the Center for Quantum Materials. “The ability to tune and modify the properties of quantum materials is pivotal to advances in both fundamental research and modern technology.”

“We were quite surprised with the results” Greven said. “We went into this thinking that our techniques would really mess up the material. We would have never guessed that these imperfections would actually improve the materials’ superconducting properties, which means that, at low enough temperatures, it could carry electricity without any energy waste.”

Greven said this study demonstrates the great promise of plastic deformation as a tool to manipulate and create new quantum materials. It can lead to novel electronic properties, including materials with high potential for applications in technology, he said.

Greven also said the new study highlights the power of state-of-the-art neutron and x-ray scattering probes in deciphering the complex structures of quantum materials and of a scientific approach that combines experiment and theory. Diffuse neutron scattering experiments were performed on the CORELLI spectrometer of the DOE’s Spallation Neutron Source at Oak Ridge National Laboratory. Diffuse x-ray scattering experiments (Fig. 1) were carried out on the X-ray Science Division Magnetic Materials Group’s beamline 6-ID-D at the DOE’s Advanced Photon Source at Argonne National Laboratory.

“Scientists can now use these techniques and tools to study thousands of other materials,” Greven said. “I expect that we will discover all kinds of new phenomena along the way.”

We thank D. Robinson and S. Rosenkranz for assistance with x-ray scattering experiments at the APS. The work at the University of Minnesota was funded by the U.S. Department of Energy (DOE) through the University of Minnesota Center for Quantum Materials, under grant number DE-SC-0016371. The work at Argonne was supported by the U.S. DOE Office of Science-Basic Energy Sciences, Materials Sciences and Engineering Division. A portion of this research used resources at the Spallation Neutron Source, a U.S. DOE Office of Science User Facility operated by the Oak Ridge National Laboratory. D.P. acknowledges support from the Croatian Science Foundation through grant number UIP-2020-02-9494. The work at Peking University was funded by the National Natural Science Foundation of China, under grant number 11874069. Sputtering and contacting of samples was conducted in the Minnesota Nano Center, which is supported by the National Science Foundation through the National Nano Coordinated Infrastructure Network, award number NNCI-1542202. This research used resources from the Advanced Photon Source, a U.S. DOE Office of Science User Facility operated for the DOE Office of Science by Argonne National Laboratory under Contract No. DE-AC02-06CH11357.

© 2020 Regents of the University of Minnesota. All rights reserved.