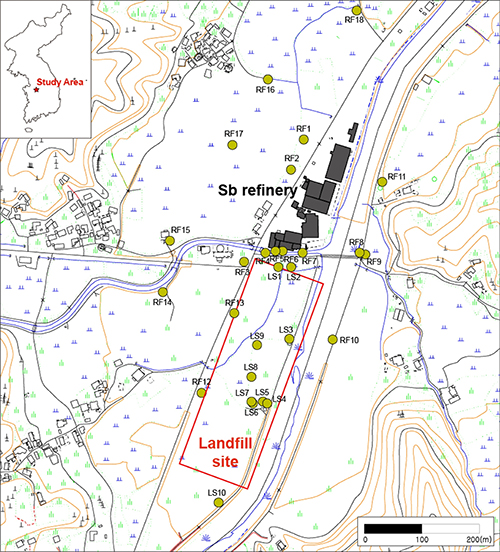 Research carried out at the U.S. Department of Energy’s Advanced Photon Source (APS) determined the distribution, speciation, and deleterious effects of antimony (Sb) and other toxic contaminants on the soil and the indigenous microbial community at an antimony refinery in South Korea. Researchers can now use this information to determine new and more effective ways to clean up antimony-contaminated sites. The results were published in the Journal of Hazardous Materials.

Antimony is a trace element in Earth’s crust, water, and soils. Although Sb is toxic, its alloys are used in batteries, printing presses, and bullets. Other antimony compounds appear in flame-retardant materials, paints, enamels, glass, and pottery. To isolate Sb for use, Sb-containing compounds must undergo mining and smelting.

Waste materials from ore refining are high in Sb and other toxic co-contaminants. Sb is genotoxic and so can damage DNA. Humans exposed to high levels of Sb may develop serious metabolic disorders. Sb also has deleterious effects on indigenous microorganisms. Sb methylation by microorganisms impacts Sb transformation and is critical in its biogeochemical cycle. Despite these dangers, South Korea does not limit antimony pollution, although many other nations, including the European Union, do.

To determine the best in situ and ex situ remediation strategies, researchers must understand the element’s speciation. The majority of Sb found in soils is as Sb(V), the mineral tripuhyite (FeSbO4), an immobile phase with low Sb bioavailability. Oxidation is caused by both abiotic and biotic processes.  Little is known about the effects of co-contaminants, such as arsenic (As) and lead (Pb), on Sb, although they appear to help control Sb bioavailability and transport. For example, Sb(III) mobility is significantly decreased by adsorption to iron (hydr)oxides or by precipitation as Sb(III) sulfide.

This study analyzed Sb and other toxic metal(loid)s near an operating Sb refinery and landfill site in South Korea (Fig. 1). In the 1980s, Sb-containing wastes were buried near the processing plant, resulting in local contamination. The site was remediated in the early 2000s by excavating and relocating the wastes. Nonetheless, there is still heavy residual contamination of Sb and the other toxic metal(oids) in the soil.

In sediment samples taken horizontally and vertically, at both the refinery and landfill, Sb concentrations were high relative to EU guidelines. In the topsoil near the refinery, Sb levels were high, but other toxic metal(oids) were low. Some of the Sb appeared as Sb(III) in Sb2O3, but most was oxidized to Sb(V). Tripuhyite is stable with low solubility and so is a sink for Sb in oxidizing and supergene environments. At greater depths, concentrations of As and Pb increased; Sb was up to 15 times higher than in the topsoil. Sb concentrations decreased with distance from the refinery in the path of the prevailing wind.

The researchers suggest that high Sb in topsoil is due to the release of Sb-containing dust from the refinery. Higher concentrations of Sb and other toxic metal(loid)s with soil depth is likely due to impurities in the Sb2O3 starting material used in earlier (1980s) refining operations. Apparently, this material was not removed during remediation in the 2000s. ― Dana Desonie

The authors thank the Materials Research Collaborative Access Team beamline staff for assistance during data collection. M.I.B., K.M.K., and E.J.O. were supported in part by the Wetland Hydrobiogeochemistry Scientiﬁc Focus Area (SFA) at Argonne National Laboratory funded by the Environmental System Science Program, Office of Biological and Environmental Research, Office of Science, U.S. Department of Energy (DOE), under contract DE-AC02-06CH11357. Materials Research Collaborative Access Team operations are supported by DOE and the Materials Research Collaborative Access Team member institutions. This work was also supported by the Basic Science Research Program through the National Research Foundation of Korea (NRF) funded by the Ministry of Education (2018R1A2B6001660) and by the Korea Environmental Industry & Technology Institute (KEITI) through the Subsurface Environment Management Project, funded by Korea’s Ministry of Environment (grant number 2018002440002). This research used resources of the Advanced Photon Source, a U.S. DOE Office of Science User Facility operated for the DOE Office of Science by Argonne National Laboratory under Contract No. DE-AC02-06CH11357.