The Ceramic that Breathes Oxygen to Make Hydrogen 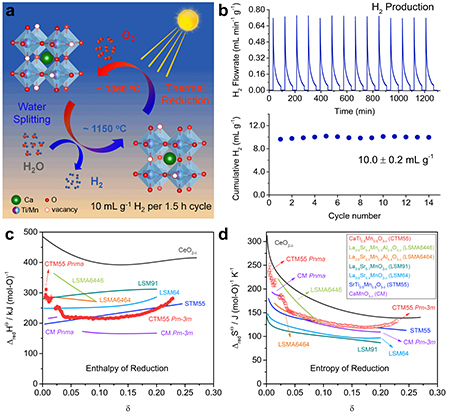 As the world tries to reduce its dependence on fossil fuels and shift to renewable energy sources, such as solar power, one challenge is finding a way to store the energy produced. A possible solution is two-step solar thermochemical hydrogen production, in which energy from the Sun is used to drive a reduction-oxidation reaction to split water into oxygen and hydrogen. The hydrogen can then be stored for later use. The reaction requires efficient, low-cost materials, and researchers using the U.S. Department of Energy’s Advanced Photon Source (APS) have examined one such material and found it to have exceptionally efficiency. Their results were published in the journal Matter.

The material in question is calcium titanium manganese oxide, in a crystal structure known as a perovskite, a promising form for solar energy applications. Tests showed that during the water-splitting phase, the reaction yielded 10 ± 0.2 mL g-1 of hydrogen, in a cycle that took an hour and a half. That’s higher than any previous reports of fuel production without having to use an excessively long cycle time. The cycle consisted of a high-temperature step at 1350° C, during which the oxide released some of its oxygen into a flow of argon gas. The temperature was then quickly lowered to 1150° C and steam was introduced. The material removed some of the oxygen from the steam, restoring the oxide and releasing hydrogen. The researchers found that the material had a large entropy of reduction and intermediate enthalpy of reduction, the combination of which creates favorable conditions for water splitting (Fig. 1).

The researchers took care to report not only the hydrogen output but also other details of the procedure, including oxidation and reduction temperatures, gas flow rates, and cycling time. Those are all important for determining the usefulness of a given material and knowing them all allows scientists to accurately compare one candidate with another in their search for the best material. For instance, the mixed poly-cation system (FeMgCoNi)Ox has a very high H2 yield, similar to calcium titanium manganese oxide, but this is only achieved with a much longer cycle time.

A perovskite has a chemical formula of ABO3. In the material studied here, the A-site atom is calcium, and the B site is an equally split mix of titanium and manganese atoms. These researchers wanted to understand which of the elements was driving the reaction by changing its oxidation state. They were sure the calcium did not change state, but they wanted to characterize the role of the titanium and manganese.

To do that, they performed x-ray absorption near-edge spectroscopy (XANES) at Dupont-Northwestern-Dow Collaborative Access Team beamline 5-BM-D at the APS (the APS is an Office of Science user facility at Argonne National Laboratory). They first grew a thin film of the Ca(Ti0.5Mn0.5)O3 perovskite oxide on a sapphire substrate. They heated the film to different temperatures, from 800° C to 1000° C, and collected x-ray spectra from the material. While the spectra from the titanium remained stable with changing temperatures, the researchers observed a shift in the manganese spectra as the temperature increased, indicating that its oxidation state was changing.

The titanium, however, is beneficial for the process because it produces a more stable crystal structure than a material made out of only calcium and manganese. It also increases the enthalpy of reduction, improving fuel output.

Further studies, looking at different ratios of titanium to manganese, may help researchers to tune the enthalpy for even higher fuel productivity.   ― Neil Savage

This research is funded by the U.S. Department of Energy (DOE) through the office of Energy Efficiency and Renewable Energy (EERE) contract DE-EE0008089. The support from the European Union’s Horizon 2020 Research and Innovation Programme under the Marie Sklodowska-Curie grant agreement no. 746167 is also acknowledged. This work made use of the Jerome B. Cohen X-Ray Diffraction Facility and the Pulsed Laser Deposition Shared Facility at the Materials Research Center at Northwestern University supported by the National Science Foundation MRSEC program (DMR- 1720139) and the Soft and Hybrid Nanotechnology Experimental (SHyNE) Resource (NSF ECCS-1542205). The DuPont-Northwestern- Dow Collaborative Access Team is supported by Northwestern University, The Dow Chemical Company, and DuPont de Nemours, Inc. This research used resources from the Advanced Photon Source, a U.S. DOE Office of Science User Facility operated for the DOE Office of Science by Argonne National Laboratory under Contract No. DE-AC02-06CH11357.