How Proteins Fold: A Guided Model 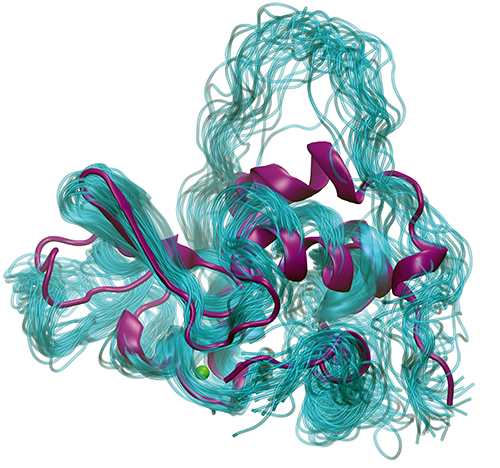 Biologists have studied the question of protein folding for a long time because understanding how proteins fold can help us to understand what goes wrong in diseases caused by misfolded proteins and can guide structure-based drug design efforts to develop new disease therapies. However, on a more basic level, scientists are also fascinated by the wonder of a process that takes an RNA message and “prints” out the correct amino acids in a linear string that then automatically folds itself, via a number of partially-folded transient states, into a complex three-dimensional structure, such as an enzyme. One model that has been extensively used for these investigations is a small protein from milk called bovine lactalbumin (BLA) for which the structure is well known, including some, but not all, details of its folding intermediates. Recently, a team using the U.S. Department of Energy’s Advanced Photon Source (APS) reported on a new approach that has provided a way to capture more detailed information about these important folding intermediates. Their results were published in The Journal of Chemical Physics.

The basis for this technical advance was the development of a method for transforming the structural data signal from time-resolved x-ray solution scattering (TRXSS) experiments to a format that can be fed into molecular dynamics (MD) simulations to provide a kind of “guardrail” to guide the simulations and make sure that atomic-level data provided by the simulation agree with the secondary structure data provided by the TRXSS. The MD simulations balance the TRXSS data by filling in the details that are inherently lost in the spatial orientation data for TRXSS compared to x-ray crystallography. For the TRXSS, the high time resolution of the synchrotron pulsed x-rays (100 picoseconds) at the BioCARS 14-ID-B beamline at the APS allowed separation of distinct conformational states of the protein. The APS is an Office of Science user facility at Argonne National Laboratory.

One important aspect of this experiment was to find conditions in which the BLA protein molecules in the solution could be triggered to rapidly unfold, all at once, and allow researchers from Northwestern University, The University of Chicago, and Argonne to capture the transformation process in action. This is achieved by a sudden temperature rise, called a T-jump, provided by a nanosecond infrared pulse that heats the solvent and unfolds the proteins while the researchers capture the TRXSS structural data. There is evidence that folding and unfolding travel through the same intermediates, so this method provides a way to capture the event in a controlled manner.

The first steps were to decide on the temperature for the T-jump and to calibrate the MD simulations of BLA to equilibrium conditions. After performing melting temperature experiments, the team settled on an 11.5° C T-jump performed at 60° C, 65° C, and 70° C with data recorded from 20 microseconds to 70 milliseconds after the jump. The TRXSS data captured several intermediates that fit to a kinetic model in which the protein went from a folded state to an intermediate state and then an unfolded state or from a folded state directly to one of two unfolded states. The initial molecular modeling simulations using data derived from TRXSS to steer the simulations converged on the same structures, demonstrating that the MD simulations guided by the scattering data were finding relevant conformations.

Further investigation of the unfolding process using the TRXSS data-guided MD simulations enabled the researchers to look at changes in the features of secondary structures, well-known α-helical and β-sheet structures in BLA, during the unfolding process. Interestingly, the unfolded structures retain some α-helical secondary structure that is likely to be stabilized by the presence of a bound calcium ion and a disulfide bridge in the protein. The intermediate structure was determined to represent the “molten globule” state that describes a protein that has reached a thermodynamic threshold for folding. Perhaps surprisingly though, the intermediate molten globule displayed more unstructured helices than the unfolded state.  However, the intermediate state was more conformationally ordered than the unfolded state with a more compact size, consistent with it being the molten globule state.

Taken together, these data provide a confirmation that this approach of using the TRXSS data to guide MD simulations can provide atomic-level data for understanding the protein folding process. Now that this proof-of-concept experiment has been successful, the team hopes to apply their TRXSS-guided simulation method to other important protein folding questions.  ― Sandy Field

This work was supported by the National Institutes of Health (NIH) under Contract No. R01-GM115761. D.J.H. acknowledges support from the National Institute of General Medical Sciences (NIGMS) of NIH for a training grant (Grant No. 5T32GM008382) and the U.S. Department of Energy (DOE) (Grant No. DESC0000989), Office of Science Graduate Student Research program, administered by the Oak Ridge Institute for Science and Education, managed by ORAU under Contract No. DE-SC0014664. BioCARS is supported by the NIGMS of the NIH under Grant No. R24GM111072. The time-resolved setup at BioCARS Sector 14 was funded in part through collaboration with Philip Anfinrud (NIH/National Institute of Diabetes and Digestive and Kidney Diseases). The authors would like to acknowledge Guy Macha (BioCARS) for his assistance in designing the sample holder. This research used resources of the Advanced Photon Source, a U.S. DOE Office of Science User Facility operated for the DOE Office of Science by Argonne National Laboratory under Contract No. DE-AC02-06CH11357.