In Search of Fast-Charging Lithium-ion Batteries 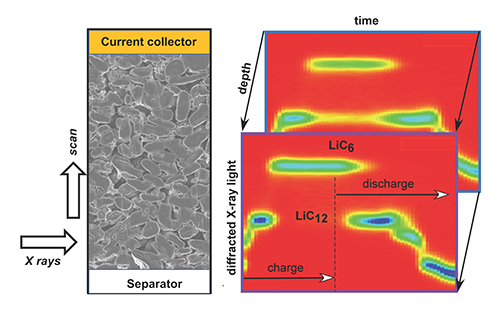 It takes about an hour to charge an electric car’s battery, but only 10 minutes to fill up a gas tank. Electric car drivers would love to have a battery that charged in 10 minutes, but the lithium-ion batteries in cars degrade if you charge them too fast. Examining processes that lead to battery failure as they occur could help engineers develop better ones. Researchers used high-brightness x-rays from the U.S. Department of Energy’s Advanced Photon Source (APS), an Office of Science user facility at Argonne National Laboratory, to register changes in battery materials layer by layer and in real time as they pushed the batteries closer to the limits of fast charging. Insights gained from these results, published in the Journal of Power Sources, will lead to electric cars that can keep up with gas powered cars—even at the filling station.

A typical lithium-ion battery has a positively charged cathode made of a layered material such as a nickel-manganese-cobalt oxide, and a negatively charged anode made of layered graphite. When the two are connected in a circuit, lithium ions flow between the two electrodes.

The rapid movement of lithium ions through the battery stresses the electrode materials. As lithium ions fill the spaces between sheets of graphite in the anode, the sheets move apart. The whole anode swells, and the extra space allows more lithium ions to flow inside. Something similar happens at the cathode when the battery is charged.

At normal charging and discharging rates, the lithium ions move smoothly. But when the rate increases, traffic jams can occur. Instead of sliding into open slots in the electrode materials, the lithium ions bunch up, sticking to surfaces and even forming metallic lithium on the anode. That blocks the smooth transit of lithium ions into the electrode bulk, eventually degrading the cell performance.

To see exactly how this happens in real time, a team of researchers from Argonne and Princeton University used the APS X-ray Science Division Materials, Physics & Engineering Group’s 6-BM beamline at the APS to view lithium-ion cells (a cell is a section of a battery) as they charged and discharged at various rates. The 6-BM beamline was chosen for its extremely bright, polychromatic light, which allows the scientists to use energy dispersive x-ray diffraction. The crystal lattices of different materials diffract the x-rays differently, so changes in the diffraction patterns reveal chemical composition changes in the lattices. With the bright x-ray beam illuminating the electrode layer-by-layer, the researchers could take frequent, multiple images of the materials as they changed across the battery.

As lithium ions insert into the anode, several phases form—ordered regions with the same chemical composition. These phases depend on the concentration of lithium in graphite. The maximum amount of lithium that can be stored in graphite is 1 lithium ion for every 6 carbon atoms. That’s one phase. Another phase would be 1 lithium ion for every 12 carbon atoms in the graphite. Each phase has its own crystal lattice that diffracts x-rays differently from other phases. Measuring the intensity of the diffracted beam in these phases across the anode allows the mapping of the chemical composition in great detail.

When the researchers ran the experiment at various charge rates, they observed that the faster the cell charged, the greater was the rate of phase change (or gradient) across the electrode thickness. Portions of the anode—the layered graphite structure that holds lithium ions—adjacent to the cathode had phases with a higher concentration of lithium ions than those deeper in the electrode (Fig. 1). Moreover, the lithium gradient persisted over time. Even after the battery’s circuit was opened so that it was no longer actively charging, the lithium-ion gradients in different phases remained, meaning that different areas of the anode with different compositions and concentrations of lithium stayed distinct. The lithium concentration did not “even out”.

This phase gradient poses one of the fundamental challenges of fast charging: How do materials scientists make it easier for lithium ions to hustle through the graphite anode, filling it up to the maximum extent, as uniformly as possible? If ions don’t do this, the electric car will have less juice when it’s fast-charged than when it’s slow-charged. It is as if a gas tank shrank when the pump filled it with gasoline too quickly.

The top speed at which the researchers charged the lithium cell was equivalent to fully charging the battery in 12 minutes. Their next step will be to look at what happens inside the cathode (positively charged) end of the battery at these speeds. And eventually the researchers will look at the battery as a whole. Their goal is to gain insights that will lead to the ideal battery, one in which every part responds as quickly as possible, allowing ion flow with minimal disruptions and roadblocks. Which is what every driver wants, whether they’re in an electric- or gas-powered vehicle.  ― Judy Meyers

I.A.S., X.H., and D.P.A. are grateful for support from the Argonne Laboratory Directed Research & Development (LDRD) program. A.R. acknowledges support from the U. S. Department of Energy (DOE) Graduate Student Research (SCGSR) program. The SCGSR program is administered by the Oak Ridge Institute for Science and Education for the U. S. DOE under contract number DE-SC0014664. M.T.F.R. acknowledges support from the U. S. DOE Vehicle Technologies Office. The electrodes examined in this study were produced at the U.S. DOE CAMP (Cell Analysis, Modeling and Prototyping) Facility at Argonne. The CAMP Facility is fully supported by the U.S. DOE Vehicle Technologies Office. This research used resources of the Advanced Photon Source, a U.S. DOE Office of Science User Facility operated for the DOE Office of Science by Argonne National Laboratory under Contract No. DE-AC02-06CH11357.

The U.S. Department of Energy's Advanced Photon Source at Argonne National Laboratory is one of the world’s most productive x-ray light source facilities. Each year, the APS provides high-brightness x-ray beams to a diverse community of more than 5,000 researchers in materials science, chemistry, condensed matter physics, the life and environmental sciences, and applied research. Researchers using the APS produce over 2,000 publications each year detailing impactful discoveries and solve more vital biological protein structures than users of any other x-ray light source research facility. APS x-rays are ideally suited for explorations of materials and biological structures; elemental distribution; chemical, magnetic, electronic states; and a wide range of technologically important engineering systems from batteries to fuel injector sprays, all of which are the foundations of our nation’s economic, technological, and physical well-being.