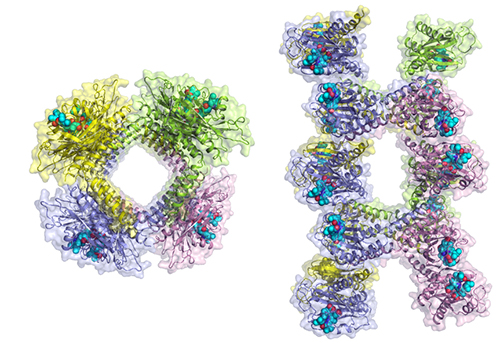 Cyanobacteria are some of the oldest organisms on earth, dating back 3.5 billion years, and can be found almost everywhere on our planet. These single-cell organisms are photosynthetic and have found ways to adapt to a variety of diverse and extreme ecological niches. One way they have achieved this is by adapting and tuning their photosynthetic machinery to the light color of the environment. This process, known as complementary chromatic acclimation, is mediated by photoreceptor proteins containing light-sensing chromophores, in particular, a family of bilin-binding photoreceptors called cyanobacteriochromes (CBCRs). CBCRs were previously thought to absorb light in the shorter wavelength range of the visible spectra. However, a family of CBCRs has been recently discovered to absorb far-red light, suggesting a new mechanism of spectrum tuning. Making use of the high-brightness x-rays produced by the U.S. Department of Energy’s Advanced Photon Source (APS), an Office of Science user facility at Argonne National Laboratory, the structural basis for the far-red sensing ability has been investigated for one representative far-red absorbing CBCR (frCBCR). Due to the fact that far-red light can penetrate deep tissues in animals, mechanistic studies on frCBCRs may offer strategies for developing novel optical reagents and fluorescent probes for a variety of medical applications. These results obtained by researchers from the University of Illinois at Chicago and the University of California Davis, were published in the Proceedings of the National Academy of Sciences of the United States of America.

Light-sensing phytochromes from plants, fungi, and bacteria, including cyanobacteria, possess a conserved light-sensing module to perceive and relay the light signal to whatever output domain the sensor is connected to. Cyanobacteria have evolved to integrate a wide array of sensor and signaling modules to feed into a variety of bacterial metabolic processes that respond to light. This work focused on elucidating the structure of the far-red-absorbing dark state of the chromophore-binding domain of the frCBCR from Anabaena cylindrica, a genus of filamentous cyanobacteria that exist as plankton. This frCBCR uses a phycocyanobilin (PCB) chromophore, similar to those found in most known CBCRs, to undergo a previously unexplored far-red/orange photocycle. The team solved the crystal structure of the Anabaena frCBCR domain at both cryogenic and room temperature (Fig. 1). The cryogenic data were obtained at the Life Sciences Collaborative Access Team (LS-CAT) 21-ID-D x-ray station at the APS. Room-temperature Laue diffraction data were obtained at the BioCARS 14-ID beamline, also at the APS.

The structural data showed that the Anabaena frCBCR exhibits many of the typical features of other known CBCRs including an α/β fold with a central β sheet and a chromophore pocket surrounded by several conserved aromatic residues observed in other CBCRs (Fig. 1). However, the PCB chromophore, which is covalently attached to the protein via cysteine 943, adopts a very unusual all-Z,syn configuration that differs from all known CBCRs and phytochromes. This unusual configuration along with the clockwise rotation of the chromophore gives rise to unique protein-chromophore interactions in the chromophore binding pocket.

In order to identify amino acids responsible for the far-red absorption properties of frCBCRs, the team performed 34 site-directed mutagenesis changes at 25 different amino acid positions that potentially affect protein-chromophore interactions. These mutational studies pointed to two hallmark residues of frCBCRs, namely leucine 944 and glutamic acid 914, positioned at the opposite faces of the chromophore. As a result of their dispositions relative to the chromophore, the side chain of Glu914 engages direct hydrogen bond interactions with the pyrrole rings A and D of the chromophore, suggesting two distinct mechanisms of spectrum tuning. Together with pH titration and chromophore swapping experiments, the authors proposed that the far-red sensing ability of the Anabaena frCBCR arise from the additive effects of these two distinct mechanisms.

The team hopes to answer unresolved questions regarding their proposed far-red tuning mechanism with follow-up experiments using vibrational and NMR spectroscopy and learn more about the transition between the far-red sensing dark state and the photoproducts using dynamic crystallography.  ― Sandy Field

We thank the staff at BioCARS and the Life Sciences Collaborative Access Team for support in x-ray diffraction data collection. This work is supported by grants from the U.S. Department of Energy (DOE) Office of Science-Basic Energy Sciences, under Contract E-FG02- 09ER16117 to J.C.L., and from the National Institutes of Health (NIH) under R01EY024363 to X.Y. Use of the LS-CAT is supported by the Michigan Economic Development Corporation and the Michigan Technology Tri- Corridor under Grant 085P1000817. Use of BioCARS was supported by the National Institute of General Medical Sciences of the NIH under grant number P41 GM118217. This research used resources of the Advanced Photon Source; a U.S. DOE Office of Science User Facility operated for the DOE Office of Science by Argonne National Laboratory under Contract DE-AC02-06CH11357.