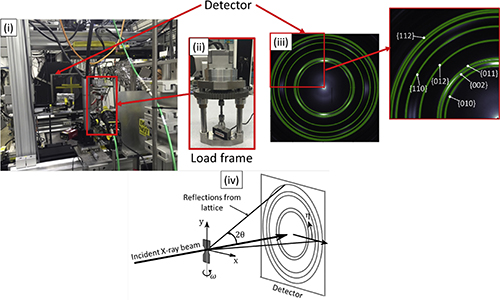 Titanium alloys are widely used in the biomedical and aerospace industries. Even though these alloys have been in use for decades, the mechanisms associated with their deformation and the ensuing mechanical properties are still not well understood. A computational technique called crystal plasticity modeling can effectively describe the stress-strain response of these alloys at the single-crystal level. The technique relies on a range of constitutive equations, in which the incorporation of additional physics-based relationships typically results in additional model parameters. These additional parameters need to be calibrated, which often requires the use of experimental data acquired at multiple length scales. Researchers recently developed a crystal plasticity based finite element (CPFE) model for a dual-phase titanium alloy, Ti–6Al–4V, with explicit modeling of the orientation and morphology of the alloy’s α and β phases. The model was then calibrated with experimental data consisting of macroscopic stress-strain curves coupled with lattice strains on different crystallographic planes for the two phases obtained at the U.S. Department of Energy’s Advanced Photon Source (APS). The fully calibrated CPFE model was then used to examine deformation within Ti–6Al–4V. Their results, published in the Journal of the Mechanics and Physics of Solids show that compared to dual-phase microstructures, single-phase α and β alloys are not suitable due to homogeneity in the deformation behavior leading to reductions in the fatigue lifetimes. Comparing the dual-phase microstructures used in this study, the results also show bi-modal microstructures, in which α and β phases are oriented in a way that aligns their slip systems, are more likely to minimize stress relaxation over time leading to improvements in the time-dependent fatigue behavior of alloy components.

The atoms of pure titanium (Ti) align in either a hexagonal close-packed crystalline structure, called the alpha (α) phase, or a body-centered cubic structure, called the beta (β) phase. In the pure metal, transformation from the α to the β phase occurs upon heating above 883° C, but most alloying elements either stabilize the α phase to higher temperatures (aluminum) or stabilize the β phase to lower temperatures (vanadium). In dual-phase titanium alloys, the phases exist alongside each other.

The titanium alloy Ti-6Al-4V is known for its high strength-to-weight ratio and resistance to corrosion. Accounting for half of all titanium alloy manufactured, Ti-6Al-4V is commonly used in aerospace, biomedical, and high-performance sports applications. A wide range of physical and mechanical properties of Ti-6Al-4V can be achieved by varying the microstructure of the alloy via deformation and recrystallization processes. The mechanisms associated with deformation, however, have not been well characterized.

In dual-phase titanium alloys with bi-modal microstructure, the α and β phases can be oriented in a manner that makes their slip systems aligned or not aligned. This orientation can be controlled by varying the thermomechanical-processing route and the heat treatment used to manufacture the alloy. Understanding the effect of crystallographic orientation of the phases on specific material properties like time-dependent cyclic loading can inform the design of dual-phase alloys for specific applications.

Traditional macroscopic models of Ti-6Al-4V’s plasticity are unable to capture the local details of the deformation mechanisms at the microstructural level. While deformation in titanium alloys can be studied at different length scales, examining the material at the meso-scale (crystal scale) is necessary to understand strain localization associated with various phenomena including fatigue crack initiation as the local microstructure significantly influences the crack initiation and small crack propagation behaviors

Crystal plasticity modeling is a computational technique used to obtain the relationship between stress and strain and which also captures the underlying physics of materials at the crystal level.

Crystal plasticity-based finite element (CPFE) modeling is a powerful tool for understanding deformation at the crystal scale. In an effort to reduce model complexity and computation time, many CPFE models for dual-phase titanium alloys neglect the β phase due to its relatively low volume fraction. In addition, several other parameters that have an inherent physical basis also pose challenges in being measured directly at the grain scale that best illustrates deformation. Therefore, the calibration of accurate and precise crystal plasticity modeling requires the use of a larger dataset derived from experiments performed across multiple length scales.

To calibrate CPFE model parameters, the researchers in this study coupled stress-strain curve data from specimen-level tension tests with lattice strain data from the individual α and β phases of Ti–6Al–4V, the latter of which were obtained from high-energy x-ray diffraction (HEXD) experiments (Fig. 1) conducted at the X-ray Science Division Materials Physics & Engineering Group’s beamline 1-ID at the APS, an Office of Science user facility at Argonne National Laboratory.

They found that not including the β phase in the simulations results in under-predicting the localized heterogeneity in deformation. They also showed that single-phase α and β alloys are not suitable due to homogeneous slip resulting in relatively higher amount of plasticity in the microstructure, compared to dual-phase microstructures. In addition, the results demonstrated Ti-6Al-4V with higher concentration of the β phase will result in higher accumulation of plasticity, which would have detrimental effects on the time-dependent fatigue behavior. The research further suggests that introducing mechanisms to promote the alignment of α and β phases slip systems limits the redistribution of stresses within the alloy and hence may improve time-dependent cyclic loading performance.  ― Chris Palmer