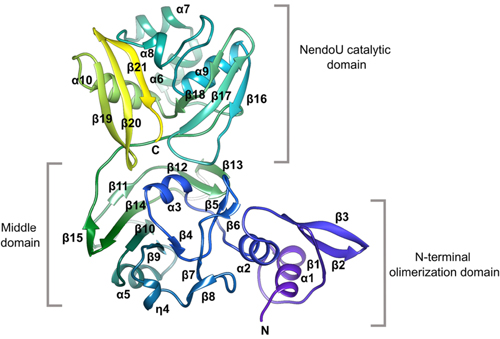 The economic, societal, and personal reverberations from the historic COVID-19  virus will be felt for years to come. As we continue to brace for new variants of SARS-CoV-2 and think about the potential for future pandemics, it is important that we develop a thorough understanding of the structures and reactivities of these deadly viruses so that we can be better prepared for the next global outbreak. To do this, we not only need to know the similarities between different viruses, but also their differences so that we can understand why some viruses only spread to a few thousand people whereas some have the ability to shut down the entire world. A team of researchers conducting experiments at the U.S. Department of Energy’s Advanced Photon Source (APS) are making significant strides in understanding the structures, active sites, and reactivity of SARS-CoV-2. At the early stage of the pandemic, the team characterized the reactivity and structure of a new subunit of SARS-CoV-2, a nidoviral RNA endoribonuclease known as NendoU. The insights gained through this research, published in the journal Protein Science, may lead to a better understanding of why SARS-CoV-2 is much more transmittable in comparison to other coronaviruses like SARS-CoV and MERS-CoV.

Since the start of the pandemic, we have learned much about the structure of SARS-CoV-2. In general, SARS-CoV-2 is a non-segmented positive-sense RNA virus that contains large replicase non-structural proteins (NSPs), followed by structural and accessory genes. Cleavage of the virus results in 15 or 16 NSPs that assemble into a large membrane-bound complex that exhibits enzymatic properties that are important for viral replication. These NSP complexes are segmented into 3 main domains: N-terminal domain, middle domain, and the C-terminal catalytic NendoU (or nidoviral RNA uridylate-specific endoribonuclease) domain. In general, the structures of NSPs are rare with a total of 8 NSP15 structures having been published prior to this study. NSP15 is particularly interesting because SARS-CoV-2 shares similar identity and similarity with SARS-CoV (88% and 95%, respectively) whereas MERS-CoV is significantly different with a 50% sequence identity and 65% similarity.

In this work, the research team reports new high-resolution structures of the NendoU domain of SARS-CoV-2 (Fig. 1) obtained at Structural Biology Center (SBC-XSD) beamline 19-ID at the DOE Office of Science’s APS at Argonne National Laboratory. In general, the N-terminal domain consists of an antiparallel ꞵ-sheet wrapped around two ɑ-helices while the middle domain is formed by 10 ꞵ-strands organized in three hairpins, a mixed ꞵ-sheet, and three short helices. Of particular interest is the structure of the NendoU catalytic domain which is composed of two antiparallel ꞵ-sheets with their edges hosting a catalytic site. SARS-CoV-2 NendoU monomers assemble into a double-ring hexamer that is essential for enzymatic activity.

The active site is located in a shallow groove between the two ꞵ-sheets and contains six key residues: His235, His250, Lys290, Thr341, Tyr343, and Ser294. These key residues are conserved among SARS-CoV-2, SARS-CoV, and MERS-CoV. However, the MERS-CoV enzyme shows significant structural changes, particularly in the middle domain, that could impact enzymatic activity. Specifically, key residues postulated to be responsible for metal binding in SARS-CoV-2 and SARS-CoV are absent in the case of MERS-CoV. This key difference would alter the catalytic behavior of MERS-CoV in comparison to SARS-CoV-2 and SARS-CoV. Since many therapeutics are designed to target the enzymatic active site of a virus, Kim et al. postulate that inhibitors designed for SARS-CoV-2 would cross-react with SARS-CoV but would be unlikely to inhibit the enzyme in MERS-CoV.

The structural insights gained through this work significantly increases the understanding of the structure and function of NendoU in coronaviruses. And the results highlight specific variations in virus enzyme active site that could lead to the development of custom therapeutics capable of specifically targeting the key replication engine of the virus.   ― Stephen Taylor