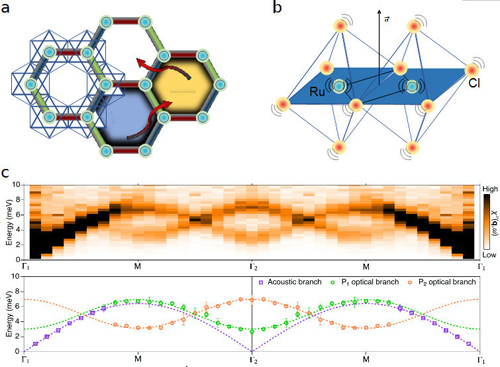 An international research team has demonstrated a new technique for detecting exotic quantum states in crystalline materials. The researchers used the quantum-mechanical equivalent of sound waves to confirm that a phase of matter known as a quantum spin liquid was present in a crystal of ruthenium trichloride (RuCl3) chilled to cryogenic temperatures. A quantum spin liquid, or QSL, is a special kind of magnetic state that can only occur in particular types of materials. By observing changes in the quantum sound waves (phonons) traveling within a tiny sample of RuCl3, the scientists were able to identify two distinct quantum excitations characteristic of a QSL. The phonons were detected and measured during inelastic x-ray scattering (IXS) experiments carried out using the U.S. Department of Energy’s Advanced Photon Source (APS). The experimental results, published in the journal Nature Communications, confirm that RuCl3 can host a QSL, which was suspected based on previous investigations and theoretical considerations. More importantly, demonstrating that phonons can be used to identify quantum spin liquids and other quantum states provides scientists a powerful new tool for probing a wide variety of promising materials for these exotic phenomena. Future research into QSLs may lead to advances in quantum materials and quantum computing.

A quantum spin liquid arises when the spins of the electrons in certain compounds enter a fluctuating magnetic arrangement. This arrangement is quite different than those of typical magnetic systems. For example, in a ferromagnetic material such as iron the spins of its electrons tend to align in the same direction within a magnetic field. By contrast, a QSL exhibits a frustrated spin state. This state consists of continuous fluctuations of the material's electron spins. This absence of ordinary spin/magnetic order is reminiscent of the molecules in liquid, hence the reference to “liquid” in “quantum spin liquid.”

Although scientists are confident that quantum spin liquids can exist in a variety of compounds, confirming their presence has proven rather difficult. In previous scientific studies, magnetic measurements and neutron diffraction experiments have met with limited success in confirming the QSL state. In this study a new approach using phonons was used for the first time to spot a QSL.

Theoretical models indicate that certain quantum quasiparticles and excitations will arise within a QSL. Although not actual particles, quasiparticles sometimes behave like particles. For instance, a semiconductor “doped” with an impurity can produce an electron hole, which is a region lacking one or more electrons. Like an electron, the positively-charged hole can move around and form an electrical current. Though not a real particle, the hole behaves like one. Because of this particle-like behavior, the electron hole is considered a quasiparticle.

The researchers looked for the fingerprints of the quantum spin liquid state in ruthenium trichloride by looking for changes in its phonons. These phonons were detected and their intensity measured via inelastic x-ray scattering (IXS) performed on single crystals of RuCl3 using the HERIX spectrometer at the X-ray Science Division Inelastic X-ray & Nuclear Scattering Group’s 30-ID x-ray beamline. The lattice of the RuCl3 crystals formed a honeycomb-like structure, as depicted in Fig. 1(a). This honeycomb structure is very important because it supports a special type of QSL, called a Kitaev quantum spin liquid.

The RuCl3 crystals were subjected to a range of cryogenic temperatures during the x-ray scattering experiments. The x-rays detected distinct phonons within the crystals (Fig. 1c). At certain temperatures abrupt changes in the phonon spectral intensity and phonon energy were observed, indicating the presence of Majorana fermions and gauge flux modes. The detection of these quasiparticles in the RuCl3 samples unequivocally demonstrated the presence of a Kitaev quantum spin liquid.

The experimental results show that phonons can be used to detect and characterize quantum spin liquids, including Kitaev QSLs. The researchers note that the phonon coupling method might prove especially helpful for detecting QSLs in iridium-based compounds, which are resistant to neutron diffraction.  ― Philip Koth

This research at Oak Ridge National Laboratory (ORNL) was sponsored by the U.S. Department of Energy (DOE) Office of Science-Basic Energy Sciences, Materials Sciences and Engineering Division (IXS data analysis, material synthesis and data interpretation) and by the Laboratory Directed Research and Development Program of ORNL, managed by UT-Battelle, LLC, for the U.S. DOE (IXS experiment). Part of IXS data interpretation work at Brookhaven National Laboratory was supported by the U.S. DOE-Office of Science-Basic Energy Sciences, Materials Sciences, and Engineering Division under Contract No. DE-SC0012704. Extraordinary facility operations were supported, in part, by the DOE Office of Science through the National Virtual Biotechnology Laboratory, a consortium of DOE national laboratories focused on the response to COVID-19, with funding provided by the Coronavirus CARES Act. T.T.Z. and S.M. acknowledge the supports from Tokodai Institute for Element Strategy (TIES) funded by MEXT Elements Strategy Initiative to Form Core Research Center. T.T.Z. also acknowledge the support by Japan Society for the Promotion of Science (JSPS), KAKENHI Grant No. 21K13865. S.M. also acknowledges support by JSPS KAKENHI Grant No. JP18H03678. G.B.H. and S.O. were supported by the U.S. DOE Office of Science, National Quantum Information Science Research Centers, Quantum Science Center. D.G.M. acknowledges support from the Gordon and Betty Moore Foundation’s EPiQS Initiative, Grant GBMF9069. This research used resources from the Advanced Photon Source, a U.S. DOE Office of Science User Facility operated for the DOE Office of Science by Argonne National Laboratory under Contract No. DE-AC02-06CH11357.