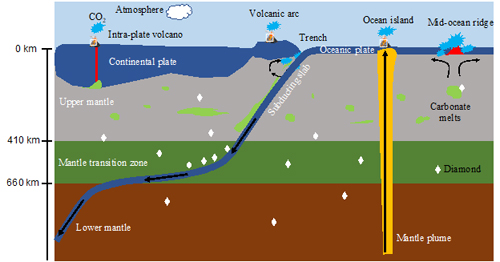 Carbon is crucial in life, energy, climate, and other Earth systems. The Earth’s upper mantle stores carbon, and carbonate-rich melts are important in regulating the deep carbon cycle where surficial carbon is subducted into Earth’s mantle at convergent plate boundaries and is recycled to the atmosphere by partial melting and degassing at volcanoes. However, experimental challenges have kept researchers from determining the elastic properties of carbonate melts, which are important in seismic detection of such melts and decipher their stability in the Earth’s mantle. This research, carried out at the U.S. Department of Energy’s Advanced Photon Source, revealed the first sound-velocity and density-data of dolomite melt under upper mantle conditions. The results, published in the journal Proceedings of the National Academy of Science of the United States of America, will foster a better understanding of the role of carbon in the Earth’s geochemical and geophysical systems.

Knowledge of the size and composition of the deep carbon reservoir in Earth’s upper mantle is needed to develop a complete understanding of the global carbon cycle. Carbon-rich materials ride the subducting oceanic crust into the deep upper mantle where they are stored as carbonate accessory minerals. Since carbonates melt at lower temperatures than silicates, it has been suggested that a small amount of carbonate-rich melt may be present in the mantle at depths where the mantle would otherwise be completely solid. Much of what is known about the upper mantle comes from seismic profiling, but the density and sound velocity of carbonate melts under upper mantle temperature and pressure conditions are poorly known.

For this paper, the international team of researchers performed high-pressure experiments and theoretical simulations to determine the elastic properties of a dolomite melt at a pressure of 5.9 gigapascals (GPa) and a temperature of 2046 K. Dolomite CaMg(CO3)2 is the composition closest to the primary near-solidus carbonatite melt under upper mantle conditions. The researchers used in situ high-pressure ultrasonic measurements obtained at the GeoSoilEnviroCARS (GSECARS) beamline 13-ID-D of the Advanced Photon Source combined with synchrotron x-ray diffraction, and imaging in a multi-anvil apparatus. They also conducted sink-float experiments in another multi-anvil apparatus at Case Western Reserve University to constrain density of the melt at high pressure. They then simulated the molecular dynamics of the dolomite melt up to 16 GPa and 3000 K. (The APS is an Office of Science user facility at Argonne National Laboratory.)

Compressional (VP) and shear (VS) wave velocities are functions of composition, melt fraction, and depth. VP is faster in carbonate melt than silicate melt at high pressures; the difference increases with increasing pressure. The researchers compared the calculated VP/VS ratio with global seismic models to constrain the distribution, composition, and amount of partial melt in the upper mantle.

Volatile-induced partial melting is pervasive in the deep upper mantle. Permeability is low, and surface tension forces are high, and so these melts may have long residence times in the upper mantle, resulting in higher VP/VS ratio observed by seismology. The VP/VS at 180-330 kilometers (km) depth is consistent with a tiny but pervasive melt fraction (~0.05%, see Fig. 1); the melt fraction is too small to distinguish its composition. Since temperatures at this depth may be too low for pure silicates to melt, melts deeper than 300 km are most likely carbonatite.

Carbonate melts that migrate upward incorporate silicate. Above 300-km, melts are probably mixtures of carbonate and silicate (< 25 wt% CO2 and > 25 wt% SiO2). The addition of silicate increases the melts’ viscosity and keeps many of them at depth. Different melt compositions may explain different upper mantle geophysical anomalies. With their low wetting angle and high enrichment in incompatible elements, carbonate melts have a significant influence on the physical and chemical properties of the upper mantle.

In addition, the upper mantle also may be heterogeneous in oxygen fugacity. Previous studies of mantle xenoliths indicted that oxygen fugacity below 250 km is too low for carbonates to be stable. More recent work revealed that oxidation is higher in upper mantle convection zones. Some of the heterogeneities in Fe3+ and carbon may be due to the large range of carbonate-induced redox melting at depths.

This study suggests that ~0.05 % carbonate-rich melt is pervasive and heterogeneously distributed in the deep upper mantle. The average global mantle carbon concentration could be 80-140 ppm by weight; this is consistent with mantle carbon content determined from geochemical studies. A reliable estimate of the carbon in the deep upper mantle will improve the accuracy of important geochemical and geophysical models.   — Dana Desonie