Probing the Structure of a Promising NASICON Material 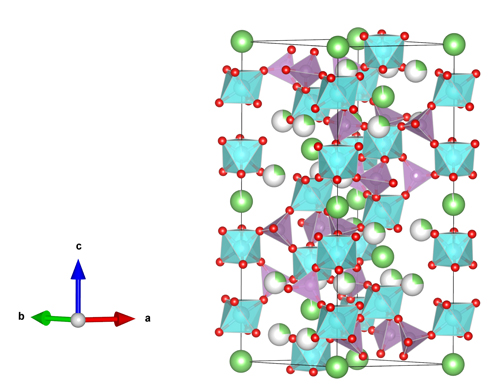 As physicists, materials scientists, and engineers continue striving to enhance and improve batteries and other energy storage technologies, a key focus is on finding or designing new ways to make electrodes and electrolytes.  One promising avenue of research involves solid-state materials, making possible batteries free of liquid electrolytes, which can pose fire and corrosion hazards.  An international group of researchers joined with scientists at Argonne National Laboratory to investigate the structure of crystalline and amorphous compounds based on the NASICON system, or sodium super-ion conductors. The work (using research carried out at the U.S. Department of Energy’s Advanced Photon Source [APS] and published in the Journal of Chemical Physics) reveals some substantial differences between the crystalline and glass phases of the NAGP system, which affect the ionic conductivity of the various materials.  The investigators note that the fraction of non-bridging oxygen (NBO) atoms appears to play a significant role, possibly altering the Na+ ion mobility, and suggest this as an area of further study.  The work provides fresh insights into the process of homogeneous nucleation and identifying superstructural units in glass ― a necessary step in engineering effective solid-state electrolytes with enhanced ionic conductivity.

Because of their high ionic conductivity, materials with a NASICON structure are prime candidates for a solid electrolyte in sodium-ion batteries.  They can be prepared by a glass-ceramic route, which involves the crystallization of a precursor glass, giving them the usefulness of moldable bulk materials.  In this work, the research team specifically studied the NAGP system [Na1+xAlxGe2-x(PO4)3] with x = 0, 0.4 and 0.8 in both crystalline and glassy forms. Working at several different facilities, they used a combination of techniques, including neutron and x-ray diffraction, along with 27Al and 31P magic angle spinning and 31P/23Na double-resonance nuclear magnetic resonance spectroscopy.  The glassy form of NAGP materials was examined both in its as-prepared state and after thermal annealing, so that the changes on crystal nucleation could be studied.

The studies reveal the structural changes that accompany the increase with x in the ionic conductivity of the crystalline material (Fig. 1).  The NAGP x = 0 and x = 0.4 compounds are classified as space group R3 while the x = 0.8 compound is space group R3c.  The x = 0 phase shows tetrahedral PO4 motifs linked by bridging oxygen (BO) atoms to four octahedral GeO6 motifs.  This permits Na+ ions to reside at the interstices, allowing ionic conductivity.  In the glassy NAGP phases, the formation of sub-octahedral Ge and Al-centered units leads to NBO atoms.  Upon annealing, the fraction of NBO atoms decreases as the Ge and Al coordination numbers increase.  Again, the ionic conductivity increases with the concentration of Na+ ions in the glassy NAGP material.

Based on the Ren and Eckert model for vitreous sodium phosphosilicates, the researchers propose a model for the x = 0 glass in which superstructural units are formed.  In these units, P(3) phosphate motifs with three BO and one NBO atoms are converted to P(4) phosphate motifs with four BO atoms, thereby converting GeO4 to GeO6 motifs and increasing the size of the superstructural units.  Annealing the as-prepared glass leads to increases in both the Ge coordination number and the fraction of P(4) motifs, which provide the nucleation sites for crystal growth.  ― Mark Wolverton