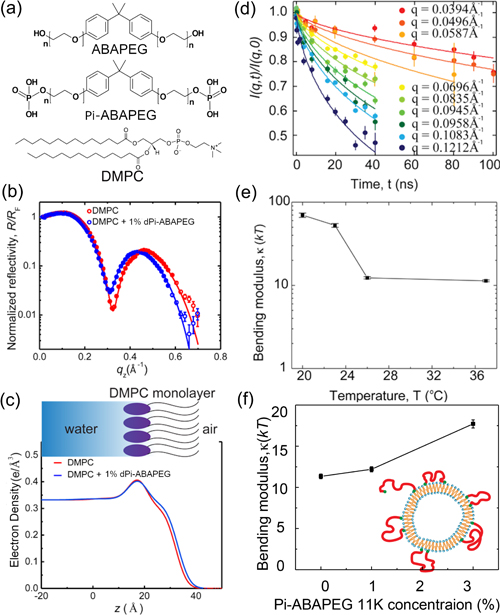 Cellular membranes are the body's wall of defense against nefarious invaders, with the tricky task of blocking the bad guys while letting beneficial molecules come and go. Scientists are beginning to learn membranes' secrets and are using this knowledge to develop pharmaceuticals that can help secure the perimeter. Recently, researchers developed a potential membrane-targeting treatment—called end-phosphorylated polyethylene glycol triblock copolymer (Pi-ABAPEG)—for infections caused by pathogens that attack the epithelium, a thin protective layer of cells that lines the outer surface of organs and blood vessels. To probe the mechanism behind Pi-ABAPEG's protective effect, the researchers studied interactions between the copolymer and a membrane model using a number of advanced instruments including the U.S. Department of Energy’s Advanced Photon Source (APS). Together, these measurements, published in the journal Soft Matter, painted a detailed picture of how Pi-ABAPEG protects cells from pathogens, providing insights that could bolster the next generation of pharmaceutical defenses.

The pharmaceutical industry has long known the potential benefits of conjugating medications to polyethylene glycol (PEG), a hydrophilic polymer that can improve drug stability and therapeutic effect. But “PEGylating” may be just the beginning. Scientists are now using PEG as a backbone upon which to built ever more sophisticated pharmaceutical tools. This approach inspired the discovery of Pi-ABAPEG, which has a hydrophobic bisphenol A (BPA) center flanked on both sides by a PEG polymer capped with inorganic phosphate. The molecular moieties are believed to work together to target the Pi-ABAPEG to the epithelial membranes, where the phosphate--a universal signaling molecule--can trick microbes into becoming less virulent. But the details were still fuzzy, prompting the researchers to take a closer look.

The first step was to create a model system to emulate a biological membrane in experiments. For this study, the researchers chose 1,2-dimyristoyl-sn-glycero-3-phosphocoline (DMPC) as their base molecule for building vesicles, which are hollow lipid bilayer balls. They then performed a series of structural studies with the DMPC vesicles in the presence of either Pi-ABAPEG or ABAPEG, the polymer without the phosphate caps that doesn't have the observed therapeutic benefits.

Before mixing the copolymers with the vesicle, the researchers compared the copolymers individually using small-angle neutron scattering (SANS), a technique that can probe material structures on the nanometer to micrometer scale. The SANS measurements for Pi-ABAPEG and ABAPEG, carried out at the NIST Center for Neutron Research (NCNR) at the National Institute of Standards and Technology (NIST), and at the High Flux Isotope Reactor (HFIR) at Oak Ridge National Laboratory (ORNL), revealed that the two polymers have almost identical structures, except for the phosphate caps.

In spite of their near-identical structures, ABAPEG and Pi-ABAPEG have very different impacts on the structure of the DMPC vesicles. Dynamic light scattering measurements, which report on the behavior of vesicle particles, showed that ABAPEG causes the DMPC vesicles to change phase, indicating a breakdown of vesicle structure, potentially induced by osmotic stress. Pi-ABAPEG, on the other hand, seemed to have little impact on the overall stability of the DMPC vesicles, confirmed by SANS measurements. (The APS and HFIR are Office of Science user facilities.)

However, further analysis revealed that Pi-ABAPEG did generate small differences in membrane structure. X-ray reflectivity measurements at the ChemMatCARS 15-ID x-ray beamline of the Advanced Photon Source provided the most detailed look at these membrane changes, showing that Pi-ABAPEG adsorbs on the surface of the lipid vesicle, resulting in a more compact DMPC monolayer structure. Neutron spin-echo studies at the NCNR further showed that the membranes with Pi-ABAPEG adsorption had a higher membrane bending modulus, a measure of the curvature of the membrane. These findings highlight the importance of a therapeutic polymer's end groups on the structure and dynamics of membranes, providing a foundation for the development of novel medications.  — Erika Gebel Berg

Work in the Center for Molecular Engineering and the Materials Science Division of Argonne National Laboratory was supported by the U.S. Department of Energy (DOE) Office of Science-Basic Energy Sciences, Materials Science and Engineering Division. M. N. and Y. L. acknowledge funding support of cooperative agreement 70NANB15H259 and 70NANB15H260, respectively, from NIST, U.S. Department of Commerce. Access to the NG3-SANS instrument and NGA-NSE spectrometer was provided by the Center for High Resolution Neutron Scattering, a partnership between NIST and the National Science Foundation (NSF) under Agreement No. DMR-1508249. ChemMatCARS is supported by the Divisions of Chemistry (CHE) and Materials Research (DMR), National Science Foundation, under grant number NSF/CHE-1834750. A portion of the synthesis was conducted at the Center for Nanophase Materials Sciences at ORNL, which is a DOE Office of Science user facility. Part of the SANS was done on the CG-3 Bio-SANS instrument at the HFIR, which is sponsored by the Office of Biological & Environmental Research in the DOE’s Office of Science. This research used resources of the Advanced Photon Source and the Center for Nanoscale Materials, U.S. DOE Office of Science user facilities operated for the DOE Office of Science by Argonne National Laboratory under Contract No. DE-AC02-06CH11357.