Giving RNA the Golden Touch by Adding to its Alphabet 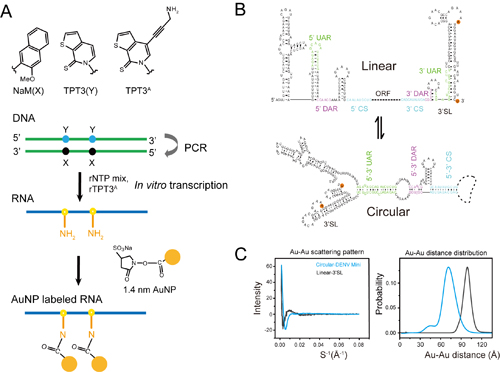 Ribonucleic acid, or RNA, is a molecule that is essential in a variety of cellular processes centered on protein synthesis and gene expression. Consequently, being able to study its structure and function is key to developing a better understanding of various disease processes and to developing therapeutics. Toward that end, researchers have sought to develop labels to attach to both natural and synthetic RNAs to elucidate their structure, locate them in cells, and visualize their interactions with other molecules. The majority of RNA labeling thus far has relied on solid-phase synthesis, a technique in which researchers incorporate chemical tags into synthetic RNA. Though this method has proven useful for smaller RNAs under 100 nucleotides, the units that make up nucleic acids, it doesn’t work for larger pieces of RNA. Looking for a better way to label large RNAs, scientists in this study developed a new method that involves creating synthetic RNA strands that incorporate an unnatural nucleotide modified with chemical groups that can bind gold nanoparticles. Using the U.S. Department of Energy’s Advanced Photon Source (APS) the researchers performed a proof-of-principle study showing that attaching one or two gold nanoparticles onto large RNAs from the dengue virus genome can function as a molecular ruler, allowing them to collect data that supports a conformational change this viral genome needs to alternate between creating proteins and replicating itself. Their results were published in the Proceedings of the National Academy of Sciences of the United States of America.

To develop site-specific labels for larger pieces of RNA, these investigators looked to NaM-TPT3, an unnatural base pair first reported in 2017 that can add to the genetic “alphabet” (adenine, or A; guanine, or G; tyrosine, or T; uracile, or U; cytosine, or C) and can be inserted into DNA and RNA, and even be translated in cells to create unnatural proteins. They used a modified version of TPT3 in ribo form that incorporates an amine chemical group, which chemically binds to sulfide molecules decorating the surface of the gold nanoparticles.

Using RNA polymerase, an enzyme that helps build RNA, the researchers incorporated the amine-modified TPT3 into the same two sites on two different lengths of RNA extracted from the dengue genome: one that’s 97 nucleotides long, and one that’s 719 nucleotides long. These two segments served as models for different conformations of the virus’ RNA—the shorter length represents a linear conformation, and the longer length represents a circular conformation. The virus has been hypothesized to stretch its RNA into a straight line for producing proteins and curling it into a circle for replicating, but evidence for this conformational change has been lacking.

After binding gold nanoparticles to the modified TPT3, the team verified its presence using two different techniques known as gel electrophoresis and UV-vis spectroscopy. They further showed through a variety of other analytic techniques that both the TPT3 incorporation and the addition of the gold nanoparticles did little to affect the structure and function of the resulting RNAs.

Finally, using the X-ray Science Division Chemical & Materials Science Group’s 12-ID-B beamline at the DOE Office of Science’s APS at Argonne National Laboratory the researchers performed x-ray scattering interferometry, in which they measured the precise positions of the gold nanoparticles using the powerful APS x-rays. Their results showed a 20 Å decrease in spacing between the two nanoparticles on the 719-nucleotide RNA compared to the 97-nucleotide RNA. This reduction, they suggest, results from the ends of the RNA joining into a circle, supporting the hypothesized conformational change between linear and circular forms.

Unlike labeling through solid-phase synthesis, the scientists suggest that this new method can accommodate RNAs of practically any size, from tens of nucleotides up to thousands long. This method also uses reactions performed at near physiological conditions, protecting RNA from denaturing and maintaining its native conformation.

They add that distances between gold nanoparticles derived through this method could be used to develop computational three-dimensional models of large RNAs or RNA-protein complexes. This technique could also be used with other types of metal nanoparticles with different properties, including silver, titanium oxide, zinc, and ion nanoparticles. Eventually, they say, synthetic RNAs with nanoparticles conjugated in this way could serve as powerful diagnostic or therapeutic tools.   ― Christy Brownlee

The authors thank Xiaobing Zuo at the beamline 12-ID-B, Advanced Photon Source, Argonne National Laboratory for assistance during data collection. This work was supported by grants from the National Natural Science Foundation of China (U1832215), the Beijing Advanced Innovation Center for Structural Biology, and the Tsinghua-Peking Joint Center for Life Sciences to X.F. This research used resources of the Advanced Photon Source, a U.S. Department of Energy (DOE) Office of Science User Facility operated for the DOE Office of Science by Argonne National Laboratory under Contract No. DE-AC02-06CH11357.