Llama Antibodies Could Block Deadly Coronaviruses from Invading Our Cells 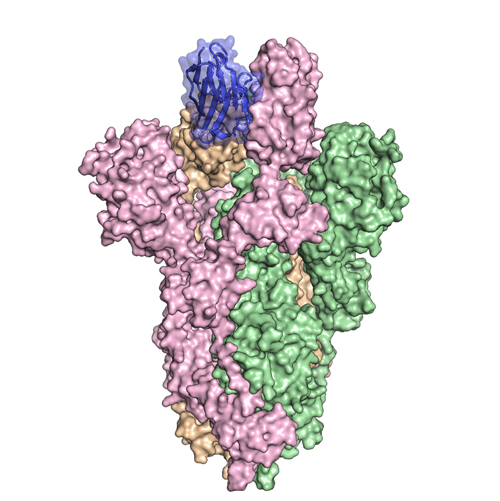 Our bodies’ immune systems are up against a lot. Harmful bacteria, fungi, parasites, and viruses have a devastating ability to hijack our cells and wreak havoc on the systems that keep us alive and well. Scientists across industries and sectors work tirelessly to engineer vaccines and therapeutics that help us combat these pathogens. With the goal of designing much-needed treatments for deadly coronaviruses like MERS-CoV, SARS-CoV, and SARS-CoV-2, a team of molecular scientists set out to understand the structures of coronavirus spike proteins and how they facilitate viral entry into our cells. While past work focused on applying structural information to the development of therapies for respiratory diseases like RSV, this group more recently—and to great acclaim—designed a stabilized version of the SARS-CoV-2 spike protein, which was used as the basis for the Moderna, Pfizer, and Johnson & Johnson vaccines. The researchers went on to produce the first molecular structure of the novel coronavirus’ spike protein. Most recently, this international team of researchers developed a potential COVID-19 antibody therapy using antibodies from llamas. This work involved immunizing llamas with prefusion-stabilized coronavirus spikes and subsequently isolating the resulting single-domain antibodies, or VHHs. Working at the U.S. Department of Energy’s Advanced Photon Source (APS), the researchers determined the crystal structures of the isolated VHHs in complex with viral agents and thus revealed their mechanisms of neutralization. These findings, published in the journal Cell, add to the growing research highlighting VHHs as desirable therapeutic candidates for viral respiratory diseases. Paired with their high thermo- and chemostability, impressive production yields, and their potential to be administered via inhaler, the antibodies could provide much-needed therapies for those infected with coronaviruses.

While some coronaviruses cause mild respiratory illness, highly pathogenic betacoronaviruses like those that cause SARS, MERS, and COVID-19 require effective therapeutics to reduce the severe, sometimes fatal, diseases they cause. To develop therapies for these diseases, it is critical to understand the structure and function of the viruses’ spike proteins. Spike (S) glycoproteins, which decorate the surface of coronaviruses, latch onto host-cell receptor proteins and undergo a dramatic structural change (from a “prefusion” to “postfusion” configuration) enabling the virus to forcefully fuse with the cell membrane. When designing therapies for coronaviruses, it’s more ideal to use antibodies that recognize prefusion spike proteins, since these antibodies create a stronger immune response. Other factors to consider are stability, mode of delivery, and production yield. For these reasons, the researchers opted to build on previous research which used camelid antibodies to study SARS and MERS.

Llamas produce VHHs, also called Nanobodies, which are extraordinarily small and stable, with comparable antigen reactivities to conventional antibodies. To induce these antibodies, the researchers injected llamas with prefusion-stabilized MERS-CoV and SARS-CoV-1 S proteins. The S-directed VHHs were then isolated and in vitro neutralization assays were conducted to evaluate antiviral activity. The researchers discovered that two VHHs bind to the spike receptor-binding domains with high affinity, neutralizing SARS-CoV-1 and MERS-CoV.

X-ray diffraction data, collected at the Structural Biology Center (SBC-XSD) beamline 19-ID at the APS, an Office of Science user facility at Argonne National Laboratory, was used to solve the crystal structures of the VHHs bound to their viral epitopes. These data support the hypothesis that the potent neutralization occurs when the VHH blocks the receptor-binding interface and holds the receptor-binding domain in an unstable configuration.

The structural work performed at the APS  helped paint a detailed picture of epitope binding by the newly isolated VHHs (MERS VHH-55, SARS VHH-72, and VHH-72-Fc) and revealed important mechanistic details about how these VHHs block coronaviruses from entering cells.  ― Alicia Surrao

This work was supported by a National Institutes of Health (NIH)/National Institute of Allergy and Infectious Disease (NIAID) grant R01-AI127521 (to J.S.M.) and in part by intramural NIAID funding (B.S.G.). Research was supported by funding from VIB, Ghent University GOA project to N.C. and X.S., FWO and VLAIO fellowships and research projects to various VIB-CMB COVID-19 response team members. We acknowledge the team of the VIB Nanobody Service Facility for their services. D.D.V. was supported by a FWOsb fellowship, W.V.B. by the FWO-SBO grant ‘‘GlycoDelete,’’ S.P. by BMBF (RAPID consortium, 01K11723D), and B.S. by FWO-EOS project VIREOS. We are deeply indebted to the VIB-CMB COVID-19 response team members, who volunteered to offer their expertise and agile work under conditions of almost complete lockdown and societal standstill. We thank the support staff of both VIB-IRC and VIB-CMB centers, the members of VIB Discovery Sciences units’ COVID-19 team for rapid and consistent support and input. SBC-XSD is operated by UChicago Argonne, LLC, for the U.S. Department of Energy, Office of Biological and Environmental Research under contract DE-AC02-06CH11357. This research also used resources of the Argonne Leadership Computing Facility, which is a U.S. Department of Energy (DOE) Office of Science User Facility supported under Contract DE-AC02-06CH11357, and of the Advanced Photon Source, a U.S. DOE Office of Science User Facility operated for the DOE Office of Science by Argonne National Laboratory under Contract No. DE-AC02-06CH11357. Extraordinary facility operations were supported in part by the DOE Office of Science through the National Virtual Biotechnology Laboratory, a consortium of DOE national laboratories focused on the response to COVID-19, with funding provided by the Coronavirus CARES Act.