Revealing the Source of Unusually High Strength in Sintered Aluminum 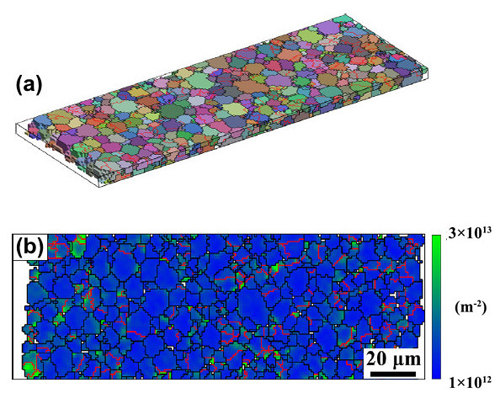 A team of researchers set out to determine the factors behind the unusually high strength of certain sintered metals. Sintering (making a powdered material coalesce into a solid or porous mass by heating it—and usually also compressing it—without liquefaction) can produce intricate forms with unusual properties. Generally speaking, the strength of a sintered object increases as its grain size decreases. However, the strengths of some very fine-grained sintered materials are much higher than theory predicts. To understand the source of this unexpected strength, the researchers used a technique called differential aperture x-ray microscopy (DAXM) to probe sintered aluminum samples possessing grain sizes of either 5 micrometers (5 μm) or 1 μm. The DAXM experiments, carried out at the U.S. Department of Energy’s Advanced Photon Source (APS), revealed the dislocation densities within the grains. Dislocations are crystalline defects that contribute to the strength of sintered materials. The researchers found that the dislocation density for the sample featuring 5-μm-size grains could theoretically explain its exceptional strength. In contrast, dislocation densities in the 1-μm grain sample were much too small to account for its strength, implying that another factor must be responsible. These insights, published in the journal Materials Letters, improve the overall understanding of fine grain-sized metals and should ultimately enable improved control of their properties.

The sintered materials examined in this research were prepared using spark plasma sintering (SPS), a technique that has gained popularity in recent years. In the SPS method, a granulated powder is placed within a container and then compressed and heated, fusing the powder into a solid mass. Heating is typically achieved via pulsed electric current.

An important mechanical property is strength, which indicates a solid's ability to withstand stresses and strains and retain its shape after these forces are removed. Plasticity is the converse of strength. A strong material has low plasticity and is difficult to permanently deform, while a weak material exhibits high plasticity and easily deforms under a load.

Most metal objects are polycrystalline, meaning they are composed of numerous distinct crystals, or grains. An important relationship between grain size and material strength is the Hall-Petch relation, which asserts that strength increases as grain size decreases. However, some sintered materials with very small grains are much stronger than expected based on the Hall-Petch relation. Uncovering the source of this exceptional strength was the goal of this study.

When an object is squeezed, some of the internal dislocations within its grains will move in response. When dislocations meet one another they can interact, spawning entirely new dislocations. A greater number of interacting dislocations usually means higher strength and less pliability. This principle also holds for the sintered aluminum samples created for this study. To determine the quantity and distribution of the dislocations within the sintered aluminum grains, the researchers used the DAXM x-ray technique at the X-ray Science Division’s Surface Scattering & Diffraction Group’s 34-ID-E x-ray beamline at the APS, an Office of Science user facility at Argonne National Laboratory. DAXM is superior to the standard imaging methods traditionally employed.

Figure 1a shows a sintered rectangular sample with grains averaging 5 μm across. The DAXM imaging revealed that the grains were nearly recrystallized due to the high heat and pressure of the sintering process. This near recrystallization of the grains implied they would possess a low number of preexisting dislocations. The dislocation density map of the 5-μm sample (Fig. 1b) confirmed this suspicion. The researchers calculated that the high strength of the 5-μm sample could nevertheless be accounted for by the low number of dislocations it contained.

For the 1-μm-grain-size sample, DAXM indicated its grains were also in a near-recrystallized state with just a few dislocations present. In this case, the dislocation density was simply too small to account for its exceptional strength. Theoretical modeling indicates instead that in this sample, new dislocations must be formed in response to loading, thereby raising the sample's strength. The increase in spatial resolution following the planned upgrade at APS will allow the evolution of dislocation density in such very-fine-grain-size samples to be directly followed during the loading process, providing a more detailed understanding of the origin of the exceptional strength in this material. — Philip Koth

Financial support from the National Natural Science Foundation of China (project numbers 51471095 and 51671113) is gratefully acknowledged. Y.Z. and D.J.J. acknowledge support from the European Research Council (ERC grant agreement No.788567) for part of the work. This research used resources of the Advanced Photon Source, a U.S. Department of Energy (DOE) Office of Science User Facility operated for the DOE Office of Science by Argonne National Laboratory under Contract DE-AC02-06CH11357.