(Solar) Power to the Perovskites 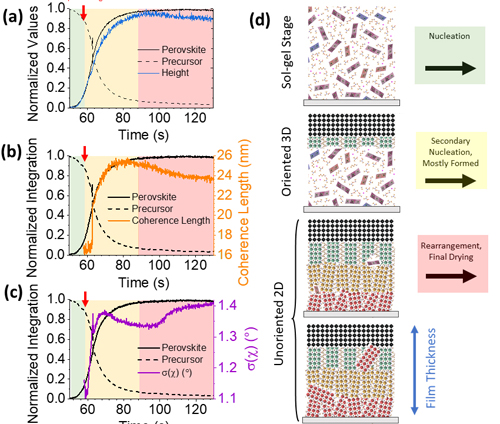 Solar power generates a growing slice of the world’s electricity, and industry is always on the hunt for better solar technology. Lead iodide perovskites are promising candidates that match the efficiency of current technologies and cost less, but most of them are less stable than the industry standard. Recently, materials scientists have found that two-dimensional (2-D) lead iodide perovskites are more stable than three dimensional (3-D) ones, and that mixing 2-D and 3-D versions created solar cells that combined the stability of the 2-D phase with the efficiency of the 3-D version. Now, a group of researchers has used the U.S. Department of Energy's Advanced Photon Source (APS) to examine how 2-D lead iodide perovskites form in real time. They found a method to enhance the quality of the 2-D cells, and now have a basis for rationally designing manufacturing techniques for high-quality commercial lead iodide perovskite solar cells.

Lead iodide perovskites come in both 2-D and 3-D forms and can have varying chemical formulas. For this project the researchers from Northwestern University and Argonne National Laboratory used 2-D perovskites of (BA)2(MA)2Pb3I10, in which BA = butylammonium and MA = methylammonium. Like other solar cells, they generate electricity by absorbing energy from sunlight and converting it into flowing electrons. It’s easiest for electrons to flow through a perfect crystal—every time electrons encounter a defect in the crystal or a boundary between two crystalline grains, they have a chance of bumping or crowding. That wastes energy and lessens the electrical current. Because of this, materials scientists try to figure out how to manufacture solar cells that are as perfect as possible, with large, well aligned crystalline grains.

Beamline 8-ID-E at the APS (an Office of Science user facility at Argonne) has a dedicated system built to perform GIWAXS, with powerful, high-flux x-rays that give excellent images of the films that comprise solar cells. The team set up their experiment to collect data throughout the lead iodide perovskite crystal film formation process, from the moment the first liquid drops landed on the substrate to the end-product after it crystallized and solidified.

As soon as the liquid landed on the substrate, the scientists saw three distinct phases of material. First, a gel. Then the gel briefly formed 3-D crystals of perovskite, and then an ordered 2-D phase. The 2-D phase formed in layers stacked like a deck of cards, with the card decks standing up perpendicular to the substrate. The layers started out highly ordered, but later relaxed in spots into mild disorder (see Fig. 1).

The “perpendicular deck of cards” orientation is desirable for solar cells, because it allows the electrons to travel within the layers but not between them. This helps improve the efficiency of lead iodide perovskite to rival that of the standard silicon and cadmium telluride cells currently on the market.

It would be possible to improve efficiency even further by creating larger crystalline grains. The researchers actually found, during this experiment, that they could do that simply by heating the substrate. That’s one clue for better manufacturing of lead iodide solar cells. Further analysis of the process of crystal organization, from the gel to the 3-D to the final ordered 2-D form, will give more clues for a rational manufacturing process.

The researchers’ next step will be to investigate how the most desirable mixed 2-D/3-D lead iodide perovskites form, so that this efficient and stable phase can be used for commercial grade solar power generation.  ― Kim Krieger

This work was supported by the Office of Naval Research (ONR) under grant N00014-20-1-2725. This project was supported in part by a  fellowship award through the National Defense Science and Engineering  Graduate (NDSEG) Fellowship Program, sponsored by the Air Force  Research Laboratory (AFRL), the Office of Naval Research, and  the Army Research Office (ARO). Part of this work was done through Dr. Hsinhan Tsai’s user proposal (GUP-61829) at the Advanced Photon Source. N.C.F is partially supported by the Center for Light Energy Activated Redox Processes (LEAP), an Energy Frontier Research Center funded by the U.S. Department of Energy (DOE) Office of  Science-Basic Energy Sciences under Award # DE-SC0001059. L.X.C.  is partially support by the Solar Energy Photochemistry program of the U. S. DOE Office of Science-Basic Energy  Sciences, through Argonne National Laboratory under Contract No.  DE-AC02-06CH11357. Use of the Center for Nanoscale Materials, an Office of Science user facility, was supported by the U.S. DOE Office of Science-Basic Energy Sciences, under  Contract No. DE-AC02-06CH11357.  This research used resources of the Advanced Photon Source, a U.S. DOE Office of Science User Facility operated for the DOE Office of Science by Argonne National Laboratory under contract no. DE-AC02-06CH11357.