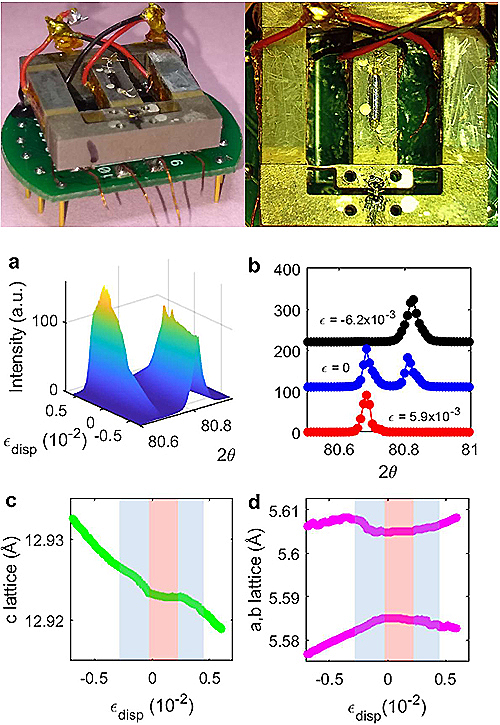 The onset of superconductivity in nearly all high-temperature superconductors is a complex phenomenon that is linked to the appearance of certain electronic and magnetic orderings. More specifically, as the temperature of these materials is lowered, their electrons arrange into a nematic ordering reminiscent of that found in liquid crystal displays. Similarly, an antiferromagnetic ordering also typically arises at low temperatures. It appears that superconductivity in these compounds can be suppressed or enhanced by the strength of their nematic electron ordering and magnetism. In this study researchers set out to vary the nematic electron ordering in an iron-based superconductor by squeezing and stretching it, during experiments performed at low temperatures. The induced stresses caused distortions in the material's crystalline lattice that were precisely measured by x-ray diffraction experiments performed at the U.S. Department of Energy’s Advanced Photon Source (APS). The experiments demonstrated the capability to dramatically promote or suppress superconductivity by applying small amounts of strain. The ability to vary a material's superconductivity using purely mechanical means is an important advance in the effort to harness superconductivity for use in a wide variety of applications.

Compounds that host high-temperature superconductivity often undergo symmetry breaking at low temperatures. To illustrate this effect, consider a cube with six identical faces. If the cube initially lies on one of its faces, it looks exactly the same after turning it onto a different face. This is called rotational symmetry. Now imagine that one face bulges outwards. Rotating the cube can point the bulge in a different direction. The cube's rotational symmetry has been lost.

To test the relationship between nematic ordering and superconductivity, the researchers from the University of Washington and the University of Tennessee prepared crystalline samples of an iron-based superconductor composed of iron, barium, and arsenic. Some iron was replaced with cobalt to add more electrons to the compound, which facilitates the superconducting state. The exchange of cobalt for iron is called doping, and some samples were more highly doped (more cobalt was added) than others.

Samples were placed in a custom-built device (Fig. 1a) that could compress or expand them while the temperature was lowered towards absolute zero. The exact change in each sample's crystalline structure was determined via x-ray diffraction performed with colleagues from Argonne National Laboratory using the X-ray Science Division Magnetic Materials Group‘s 6-ID-B beamline of the APS, an Office of Science user facility at Argonne. The experiments revealed that both under-doped and optimally-doped samples placed under stress required dramatically lower temperatures to achieve superconductivity as compared to unstressed samples (Fig. 1b,c)

It should additionally be noted that even though the samples were small (1 to 2 millimeters in length) their volumes were nonetheless sufficient to constitute a truly three-dimensional system, in contrast to the two-dimensional thin films typically used for studying superconductivity. The capability to probe 3D samples will allow investigation of the thermodynamics and other aspects of this type of phase transition. ― Philip Koth

This work was mainly supported by National Science Foundation (NSF) MRSEC at UW (DMR-1719797) and the Gordon and Betty Moore Foundation’s EPiQS Initiative, grant GBMF6759 to J.-H.C. The development of strain instrumentation is supported as part of Programmable Quantum Materials,  an Energy Frontier Research Center funded by the U.S. Department of Energy (DOE)  Office of Science-Basic Energy Sciences under award DE-SC0019443. The integration of x-ray diffraction with in situ strain is supported by the Air Force Office of Scientific Research Young Investigator Program under grant FA9550-17-1-0217 and the Defense University Research Instrumentation Program Award FA9550-19-1-0180.  J.L. acknowledges support from the NSF under grant no. DMR- 1848269. J.-H.C. acknowledges the support of the David and Lucile Packard Foundation and the State of Washington-funded Clean Energy Institute. This research used resources of the Advanced Photon Source, a U.S. DOE Office of Science User Facility operated for the DOE Office of Science by Argonne National Laboratory under contract no. DE-AC02-06CH11357.