Deep Water on Neptune and Uranus May Be Magnesium-Rich 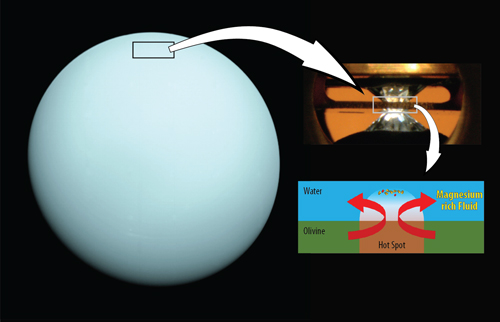 While scientists have amassed considerable knowledge about the rocky planets in our solar system, like Earth and Mars, much less is known about the icy water-rich planets, Neptune and Uranus. In a new study published in Nature Astronomy, a team of scientists recreated the temperature and pressure of the interiors of Neptune and Uranus at the U.S. Department of Energy’s Advanced Photon Source, and in so doing have gained a greater understanding of the chemistry of these planets’ deep water layers. Their findings also provide clues to the composition of oceans on water-rich exoplanets outside our solar system.

Neptune and Uranus are conventionally thought to have distinct separate layers, consisting of an atmosphere, ice or fluid, a rocky mantle and a metallic core. For this study, the research team was particularly interested in possible reaction between water and rock in the deep interiors.

“Through this study, we were seeking to extend our knowledge of the deep interior of ice giants and determine what water-rock interactions at extreme conditions might exist,” said lead author Taehyun Kim, of Yonsei University in South Korea. “Ice giants and some exoplanets have very deep water layers, unlike terrestrial planets. We proposed the possibility of an atomic-scale mixing of two of the planet-building materials (water and rock) in the interiors of ice giants.”

To mimic the conditions of the deep-water layers on Neptune and Uranus in the lab, the team first immersed typical rock-forming minerals, olivine and ferropericlase, in water and compressed the sample in a diamond-anvil to very high pressures. Then, to monitor the reaction between the minerals and water, they took x-ray measurements while laser heating the sample to a high temperature. High-resolution x-ray diffraction data were collected in situ at high-pressure and high-temperature conditions in the double-sided laser-heated diamond anvil cell (Fig. 1) at x-ray beamline 13-ID-D of the GeoSoilEnviroCARS Earth sciences facility at the APS, and at the P02.2 Extreme Conditions Beamline of PETRA III at the Deutsches Elektronen-Synchrotron. In addition, infrared experiments were carried out at beamline 22-IR-1 at the National Synchrotron Light Source II using samples prepared at Yonsei University and Arizona State University. (The Advanced Photon Source and the National Synchrotron Light Source II are DOE Office of Science user facilities at the Argonne and Brookhaven National laboratories, respectively.)

The resulting chemical reaction led to high concentrations of magnesium in the water. Based on these findings, the team concluded that deep oceans on water-rich planets may have similar chemical concentration as the Earth’s ocean but rich in magnesium.

“We found that magnesium becomes much more soluble in water at high pressures. In fact, magnesium may become as soluble in the water layers of Uranus and Neptune as salt is in Earth’s ocean,” said study co-author Sang-Heon Dan Shim of Arizona State University’s School of Earth and Space Exploration.

These characteristics may also help solve the mystery of why Uranus’ atmosphere is much colder than Neptune’s, even though they are both water-rich planets. If much more magnesium exists in the Uranus’ water layer below the atmosphere, it could block heat from escaping from the interior to the atmosphere.

“This magnesium-rich water may act like a thermal blanket for the interior of the planet,” said Shim.

Beyond our solar system, these high-pressure and high-temperature experiments may also help scientists gain a greater understanding of sub-Neptune exoplanets, which are planets outside of our solar system with a smaller radius or a smaller mass than Neptune.

Sub-Neptune planets are the most common type of exoplanets that we know of so far, and scientists studying these planets hypothesize that many of them may have a thick water-rich layer with a rocky interior. This new study suggests that the deep oceans of these exoplanets would have fuzzy interface with underlying rocky layer due to the selective leaching of magnesium from the rocky mantle.

“In the case of Uranus, if an early dynamic process enabled a rock–water reaction during the hot phases of planetary accretion, the topmost water layer may remain rich in magnesium, possibly affecting the thermal history of the planet,” said Shim.

For next steps, the team hopes to continue their high-pressure/high-temperature experiments under diverse conditions to learn more about the composition of planets.

“This experiment provided us with a plan for further exploration of the unknown phenomena in ice giants,” said Kim.

This work was supported by the Leader Researcher programme (NRF- 2018R1A3B1052042) of the Korean Ministry of Science and ICT (MSIT). We also acknowledge the support by grant NRF-2019K1A3A7A09033395 of the MSIT. S.-H.S. was supported by National Science Foundation (NSF) grant EAR1338810 and National Aeronautics and Space Administration (NASA) grant 80NSSC18K0353. S.-H.S. also benefited from collaborations and information exchange within the Nexus for Exoplanet System Science (NExSS) research coordination network sponsored by NASA’s Science Mission Directorate. S.S. acknowledges support by the GFZ German Research Centre for Geosciences. GeoSoilEnviroCARS is supported by the National Science Foundation – Earth Sciences (EAR – 1634415) and Department of Energy- GeoSciences (DE-FG02-94ER14466). Parts of this research were carried out at the P02.2 beamline at PETRA III, and we acknowledge Deutsches Elektronen-Synchrotron (DESY, Hamburg, Germany), a member of the Helmholtz Association HGF, for the provision of experimental facilities. We also acknowledge the scientific exchange and support of the Center for Molecular Water Science (CMWS) at DESY. This research also used beamline 22-IR-1 of the National Synchrotron Light Source II, a U.S. Department of Energy (DOE) Office of Science User Facility operated for the DOE Office of Science by Brookhaven National Laboratory under contract DE-SC0012704 and COMPRES under NSF cooperative agreement EAR 11-57758 and CDAC (DE-FC03-03N00144). This research used resources of the Advanced Photon Source, a U.S. DOE Office of Science User Facility operated for the DOE Office of Science by Argonne National Laboratory under Contract No. DE-AC02-06CH11357.

Copyright © 2021 Arizona Board of Regents