Shock-Induced Melting of a Porous Solid 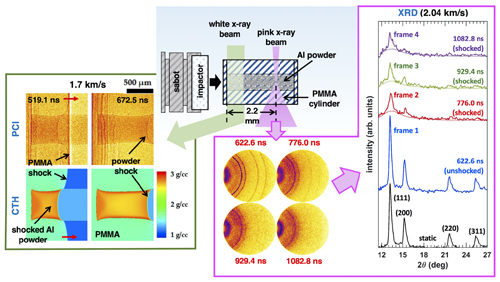 When materials experience sudden, impulsive loading via impact, shock waves travel through those materials compressing them and often causing rapid structural changes, such as melting. Scientists using the U.S. Department of Energy’s (DOE’s) Advanced Photon Source (APS) have now directly observed, for the first time, such shock-induced melting in a porous solid. The insights these results provide into the mechanisms behind such melting could be valuable for materials scientists. They could also improve our understanding of high-impact collisions between planetesimals (small celestial bodies formed during the creation of planets) and crater formation, which are widespread in the solar system and involve shock-induced melting of porous solids such as regolith, rock, or ice. It could even help us figure out how to safely deflect potentially hazardous asteroids. The results were published in Physical Review Materials.

The problem with understanding shock-induced melting is that it happens in sub-microsecond timescales, making it difficult to observe. In the past, scientists have examined this phenomenon by measuring changes in properties such as the electrical conductivity of the material or the speed at which sound travels through it. But these measurements only provide indirect evidence of melting and do not provide any information about the melt kinetics, that is how rapidly the entire material melts. To obtain real-time observations of shock-induced melting in a porous solid, researchers from three of the DOE’s national laboratories turned to ultrafast, high-energy synchrotron x-rays.

The work was carried out at the Dynamic Compression Sector (DCS) located at Sector 35 at the APS, an Office of Science user facility at Argonne National Laboratory. Columns of 50% porous aluminum powder were placed inside acrylic cylinders, which were capped at each end to contain the powder. The researchers then struck the acrylic cylinders with lithium fluoride impactors travelling at speeds ranging from 1.63 to 2.42 km/s. This created shock waves with peak pressures between 13 to 19 gigapascals (GPa) that travelled through the cylinder and aluminum powder.

To observe the shock wave effects on the aluminum powder, the researchers from the Los Alamos, Sandia, and Lawrence Livermore national laboratories used time-resolved x-ray diffraction, with measurements made using the standard 24-bunch mode of the APS storage ring. The rapid x-ray pulses generated by the synchrotron enabled the researchers to capture four diffraction images of the shocked powder that were approximately 150 nanoseconds apart. These images captured the effects of the shock wave as it propagated through the powder, recording the state of the aluminum before and after it was shocked. To determine the pressures and temperatures reached in the shocked powder, researchers performed numerical simulations using Sandia’s CTH code. To validate these simulations, researchers conducted additional shock experiments on aluminum powder under similar conditions, but this time using an x-ray phase-contrast imaging technique available at the DCS beamline (Fig. 1).

The diffraction data suggested that the shocked aluminum powder did not melt completely at any of the tested pressures. The largest amount of melting occurred when the impactor hit the acrylic cylinder at 2.42 km/s, generating shock waves with peak pressures of 19 GPa. But even then, the powder only partly melted. This contradicts previous indirect measurements using sound speeds that suggest that aluminum samples of similar porosity completely melts at peak pressures of around 14 GPa.

When granular, porous solids undergo shock compression, it leads to a large volume collapse (compaction). Work done by the shock wave to compact the porous material gets dissipated predominantly on the outer layer of each particle, which experiences extreme friction and deformation. As a result, the particles are very hot on the outside, but relatively cool in the middle. Thermal equilibration within each particle then requires heat transfer from the hot exterior to the cooler interior. The incomplete melting of the porous aluminum powder shows that thermal equilibrium was not reached following shock loading on the time scales observed here, according to the researchers.

The time needed to reach thermal equilibrium depends on the average particle size and high-pressure thermal conductivity of the material. This work, therefore, provides insights into the thermal transport process in porous solids under high-pressure shock loading. Further similar experiments on porous aluminum powder with different grain sizes would provide more useful data, the researchers say. They add that the results from such experiments could be valuable for developing heat transfer and melting models for aluminum and other porous materials relevant to planetary and materials science. ― Michael Allen

All PCI data shown here were obtained using LANL’s novel multiframe x-ray phase contrast imaging (MPCI) system developed on the IMPULSE (IMPact System for ULtrafast Synchrotron Experiments) capability at APS. Nick Sinclair, Adam Schuman, Drew Rickerson, Brendan Williams, Yuelin Li, and other DCS team members are thanked for their assistance with the XRD and PCI experiments. A.M. and B.J.J. acknowledge the financial support from LANL’s Science Campaigns, Joint Munitions Program, and MaRIE concept, and National Security Technologies Shock Wave Physics Related Diagnostic programs. LANL is operated by Triad National Security, LLC, for the National Nuclear Security Administration (NNSA) of the U.S. Department of Energy (DOE) under Contract No. 89233218CNA000001. M.C.H. and S.R. acknowledge financial support provided by the Truman fellowship (LDRD) and Science Campaigns within SNL. SNL is a multi-mission Laboratory managed and operated by National Technology and Engineering Solutions of Sandia, LLC, a wholly owned subsidiary of Honeywell International, Inc., for the U.S. DOE’s NNSA under Contract DENA0003525. R.S.C. and M.C.A.’s work was performed under the auspices of the U.S. DOE by LLNL under Contract No. DE-AC52-07NA27344 and was supported by LLNL Laboratory Directed R&D Program (tracking No. 16-ERD-010). The Dynamic Compression Sector is operated by Washington State University under the U.S. DOE/NNSA Award No. DENA0003957. This research used resources of the APS, a U.S. DOE Office of Science User Facility operated for the DOE Office of Science by Argonne National Laboratory under Contract No. DE-AC02-06CH11357.