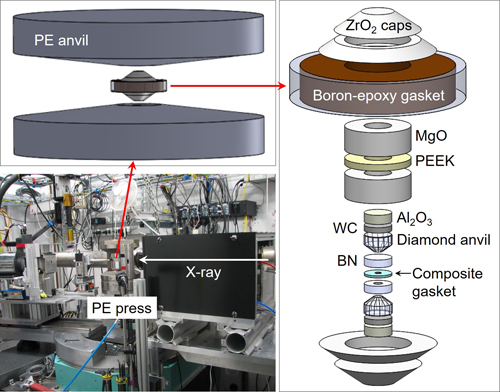 The ultrahigh-pressure behavior of SiO2 glass has attracted considerable attention because of its importance not only in high-pressure physics and materials science but also in geophysics. The physical properties of silicate melts and glasses at ultrahigh pressures and temperatures play fundamental roles in present-day magmatic processes in the Earth’s interior and are key to understanding the evolution of the early Earth. Although the structural development of SiO2 glass at moderate pressures (below 50 GPa) is well-known, its evolution in the ultrahigh-pressure (Mbar) regime remains controversial partly due to conflicting values of the Si coordination number (CSi) (number of ions bonded to Si). Even though many structural properties of network-forming glasses like SiO2 can be obtained from the structure factor S(Q), its determination in x-ray diffraction experiments has proved problematic at ultrahigh pressures. Such experiments are usually conducted using diamond anvil cells that permit only small sample sizes and very limited momentum transfer (Q) ranges, which are serious limitations in studying SiO2 glass due to the inherently low scattering signal. To overcome these difficulties, a group of researchers using the U.S. Department of Energy’s Advanced Photon Source (APS) conducted ultrahigh-pressure measurements of S(Q) using their recently developed opposed-anvil-type double-stage large-volume cell press. These results provide important implications for understanding the mechanisms underlying the pressure-induced structural evolution of network-forming glasses in physics and materials sciences, and also for investigating the nature of silicate magmas in geophysics.

The new press introduces a pair of second-stage diamond anvils into first-stage Paris-Edinburgh anvils (Fig. 1). The combination of opposed anvils provides a large opening in the horizontal plane for x-ray diffraction measurements over a large range of momentum transfer Q values in addition to affording room for significantly larger samples than are possible with the conventional diamond anvil cells used in previous studies. Capitalizing on these new capabilities, the researchers measured S(Q) across a broad pressure range to 120 GPa using multiangle energy dispersive x-ray diffraction at HPCAT-XSD beamline 16-BM-B of the APS, an Office of Science user facility at Argonne National Laboratory. With the large-volume sample sizes compensating for the weak x-ray scattering signals from SiO2 glass, the experiment could cover a large Q range up to 17 Å-1 with data quality remaining essentially unchanged up to the maximum pressure.

As mentioned, structural factor measurements are pivotal to obtaining several structural characteristics of SiO2 glass. The Fourier transform of S(Q) yields the pair distribution function g(r), which provides the Si–O (r1), O–O (r2), and Si–Si (r3) distances, since they are related to the first three peaks of the g(r). It is also a short step to estimate the Si coordination number CSi, which depends on the area under the r1 peak of the g(r).

The experiment showed that CSi remains constant at about 4 below 10 GPa, increases gradually to 6 between 10 and 54 GPa, stays nearly unchanged at 6 between 54 and 83 GPa, and finally becomes greater than 6 above 95 GPa. The observed evolution of CSi was in reasonable agreement with the results of previous studies with the greatest disparities occurring in the ultrahigh pressure region. Since changes in CSi with pressure in oxide glasses and oxide melts are known to be linked to the oxygen packing fraction (OPF), the researchers went on to examine the behavior of the OPF and Si packing fraction (SiPF). In this case, the data was more surprising.

The OPF and SiPF were derived from the r1 (Si–O distance) and r2 (O–O distance) values obtained in this study. The radius of oxygen rO was also directly measured from r2, with the density of SiO2 glass coming from a previous study. The results showed that OPF increases with pressure when CSi is ~6, which is consistent with previous studies. However, OPF turns around and starts to decrease above 95 GPa, where the CSi clearly exceeds 6. In contrast, SiPF remains almost constant between 54 and 83 GPa, where CSi is ~6, and then increases above 95 GPa. The change in SiPF above 83 GPa was ~2.5 times higher than that at 54–83 GPa. The decrease in OPF and the steep increase in SiPF indicate a relative increase in the ionic radius of silicon due to the increase of CSi to >6 above 95 GPa. These packing fractions, which are based on directly measured r1 and r2 distances, may be viewed as being more robust indicators of the structural change occurring from CSi = 6 to >6 in SiO2 glass, since they do not rely on the determination of CSi, which may be complicated by possible overlaps in the Si–O and O–O peaks in g(r).

The researchers also investigated structural constraints in terms of the ionic radius ratio of Si and O and the ratio of nonbonded radius to bonded Si–O distance, finding that both strongly suggest that a structural change takes place from CSi = 6 to >6 above ~95 GPa.  — Vic Comello

This research was supported by the National Science Foundation under Grant No. EAR-1722495. HPCAT-XSD operations are supported by the U.S. Department of Energy (DOE-NNSA) National Nuclear Security Administration’s Office of Experimental Sciences. Y. K. acknowledges support by JSPS KAKENHI Grants No. 19KK0093 and No. 20H00201, and by JSPS Bilateral Program Grant No. JPJSBP120209926. Y. W. acknowledges NSF support EAR-1620548. This research used resources of the Advanced Photon Source, a U.S. DOE Office of Science User Facility operated for the DOE Office of Science by Argonne National Laboratory under Contract No. DE-AC02-06CH11357.