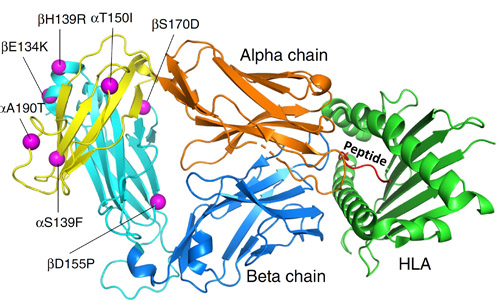 Cancer ranks as one of the greatest causes of death in the United States. Each year, nearly 600,000 Americans die from this tragic disease. While remarkable progress has been made in the field of oncology, many cancers are still presently incurable. One recent anti-cancer approach uses recombinant T cell receptors (TCRs), which are designed to help the immune system kill cancerous cells. Traditionally, TCRs have been unstable and challenging to express. With the goal of improving the efficacy of this approach, a group of researchers performed molecular modeling to discover mutations that improve the stability and expression of TCRs. These mutations reduce the glycosylation of these genetically engineered TCRs, which is an important post-translational protein modification. Importantly, these modified TCRs are able to efficiently kill tumor cells in vitro. An integral part of this work, which was published in the journal Nature Communications, involved the collection of x-ray diffraction data at the U.S. Department of Energy’s Advanced Photon Source (APS). These research endeavors could potentially pave the way for powerful new anti-cancer treatments.

The word “cancer” comprises a substantial collection of different diseases, such as breast cancer, glioblastoma, and melanoma. All types of cancer are characterized by the presence of abnormal cells that uncontrollably divide. While commendable clinical progress has been made for many types of cancer, a large number of cancers remain incurable and lack effective treatment options.

A more recent, innovative approach in the oncology field is to use genetic engineering to produce TCRs that can stimulate the activity of T cells. The goal is to produce TCRs that redirect T cells toward cancer cells to more efficiently promote cancer killing. However, effectively assembling and expressing TCRs is a challenging task. The assembly methods utilized have traditionally resulted in low yields and the produced TCRs exhibit a low stability. These two hindrances—stability and expression—have prevented TCRs from being more useful.

A recent study addressed both of these hindrances. Using molecular modeling, the researchers from the Eli Lilly Biotechnology Center and the University of North Carolina at Chapel Hill discovered new mutations in TCR constant domains that notably elevate the protein unfolding temperature. In addition to enhancing the assembly and stability of TCRs, they also improve their expression. The range of expression improvement varied from three-fold to 10-fold. These stabilizing mutations were also capable of rescuing previously destabilized TCRs. The authors noted that these enhanced TCRs exhibited reduced glycosylation—a post-translational protein modification where a carbohydrate is added to a protein. They theorize that the conformational stabilization induced by stabilizing mutations may restrict access from glycosylation enzymes. These findings were validated by demonstrating that the improved TCRs can successfully kill human cancer cells in vitro. A valuable part of this work involved a structural analysis done in collaboration with the APS, an Office of Science user facility at Argonne National Laboratory. X-ray diffraction data were collected at the Lilly Research Laboratories Collaborative Access Team (LRL-CAT) x-ray beamline 31-ID-D at the APS. Structural characterization details of the seven mutations are displayed in Fig. 1.

These findings bolster the clinical potential of recombinant TCRs. With the efficacy of the recombinant TCRs demonstrated in human cancer cells, it would be worthwhile to explore whether these improved TCRs can be used to combat cancer in mouse xenograft models.  ― Stephen Taylor

Use of the Lilly Research Laboratories Collaborative Access Team (LRL-CAT) beamline at Sector 31 of the Advanced Photon Source was provided by Eli Lilly and Company, which operates the facility. We thank Anton Frommelt, John Koss, Laura Morisco, and Jordi Benach for data collection support at the LRL-CAT beamline. This research used resources of the Advanced Photon Source, a U.S. Department of Energy (DOE) Office of Science User Facility operated for the DOE Office of Science by Argonne National Laboratory under Contract No. DE-AC02-06CH11357.