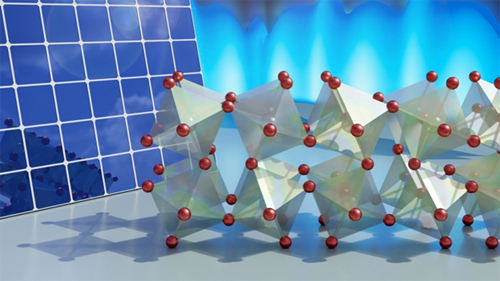 The Duke University press release by Ken Kingery can be read here.

Long-hidden molecular dynamics that provide desirable properties for solar energy and heat energy applications to an exciting class of materials called halide perovskites have been revealed by researchers using two U.S. Department of Energy (DOE) facilities including the Advanced Photon Source. Details of the discovery by researchers from Duke University, Argonne’s Materials Science Division, Northwestern University, and the University of Maryland were published in the journal Nature Materials.

A key contributor to how these materials create and transport electricity literally hinges on the way their atomic lattice twists and turns in a hinge-like fashion. The results will help materials scientists in their quest to tailor the chemical recipes of these materials for a wide range of applications in an environmentally friendly way.

“There is a broad interest in halide perovskites for energy applications like photovoltaics, thermoelectrics, optoelectronic radiation detection and emission—the entire field is incredibly active,” said Olivier Delaire, associate professor of mechanical engineering and materials science at Duke. “While we understand that the softness of these materials is important to their electronic properties, nobody really knew how the atomic motions we’ve uncovered underpin these features.”

Perovskites are a class of materials that—with the right combination of elements—are grown into a crystalline structure that makes them particularly well-suited for energy applications. Their ability to absorb light and transfer its energy efficiently makes them a common target for researchers developing new types of solar cells, for example. They’re also soft, sort of like how solid gold can be easily dented, which gives them the ability to tolerate defects and avoid cracking when made into a thin film.

One size, however, does not fit all, as there is a wide range of potential recipes that can form a perovskite. Many of the simplest and most studied recipes include a halogen—such as chlorine, fluorine or bromine—giving them the name halide perovskites. In the crystalline structure of perovskites, these halides are the joints that tether adjoining octahedral crystal motifs together.

While researchers have known these pivot points are essential to creating a perovskite’s properties, nobody has been able to look at the way they allow the structures around them to dynamically twist, turn and bend without breaking, like a Jell-O mold being vigorously shaken.

“These structural motions are notoriously difficult to pin down experimentally. The technique of choice is neutron scattering, which comes with immense instrument and data analysis effort, and very few groups have the command over the technique that Olivier and his colleagues do,” said Volker Blum, professor of mechanical engineering and material science at Duke who does theoretical modeling of perovskites, but was not involved with this study. “This means that they are in a position to reveal the underpinnings of the materials properties in basic perovskites that are otherwise unreachable.”

In the study, Delaire and co-authors working with colleagues from Argonne National Laboratory, Oak Ridge National Laboratory, and the National Institute of Science and Technology reveal important molecular dynamics of the structurally simple, commonly researched halide perovskite (CsPbBr3) for the first time.

The researchers started with diffuse scattering measurements performed at the X-ray Science Division Magnetic Materials Group’s 6-ID-D x-ray beamline at the Argonne National Laboratory Advanced Photon Source on small millimeter-scale single crystals of the halide perovskite. These results suggested that further experiments to investigate the atomic dynamics using neutrons would be important. Fortunately, Argonne’s Materials Science Division and Northwestern had the expertise to grow the large, centimeter-scale, single crystals required for the neutron measurements. The team then barraged the crystal with neutrons from the Spallation Neutron Source at the DOE’s Oak Ridge National Laboratory (the Spallation Neutron Source and the Advanced Photon Source are Office of Science user facilities). By measuring how the neutrons and x-rays bounced off the crystals over many angles and at different time intervals, the researchers teased out how its constituent atoms moved over time. “This work is a beautiful example of the complementarity of neutrons and x-rays in revealing both the structure and dynamics of complex materials,” said Ray Osborn, a scientist in Argonne’s Materials Science Division, who was involved in both sets of measurements.

After confirming their interpretation of the measurements with computer simulations, the researchers discovered just how active the crystalline network actually is. Eight-sided octahedral motifs attached to one another through bromine atoms were caught twisting collectively in plate-like domains and constantly bending back and forth in a very fluid-like manner.

“Because of the way the atoms are arranged with octahedral motifs sharing bromine atoms as joints, they’re free to have these rotations and bends,” said Delaire. “But we discovered that these halide perovskites in particular are much more ‘floppy’ than some other recipes. Rather than immediately springing back into shape, they return very slowly, almost more like Jell-O or a liquid than a conventional solid crystal.”

Delaire explained that this free-spirited molecular dancing is important to understand many of the desirable properties of halide perovskites. Their ‘floppiness’ stops electrons from recombining into the holes the incoming photons knocked them out of, which helps them make a lot of electricity from sunlight. And it likely also makes it difficult for heat energy to travel across the crystalline structure, which allows them to create electricity from heat by having one side of the material be much hotter than the other.

Because the perovskite used in the study—CsPbBr3 —has one of the simplest recipes, yet already contains the structural features common to the broad family of these compounds, Delaire believes that these findings likely apply to a large range of halide perovskites. For example, he cites hybrid organic-inorganic perovskites (HOIPs), which have much more complicated recipes, as well as lead-free double-perovskite variants that are more environmentally friendly.

“This study shows why this perovskite framework is special even in the simplest of cases,” said Delaire. “These findings very likely extend to much more complicated recipes, which many scientists throughout the world are currently researching. As they screen enormous computational databases, the dynamics we’ve uncovered could help decide which perovskites to pursue.”