Defining the Laser Speed Limit for 3-D Printing with Metal 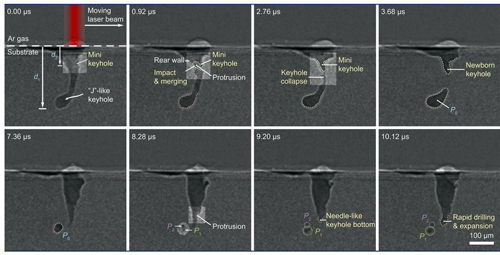 Metal objects manufactured by three-dimensional (3-D) printing often contain tiny holes. These defects can weaken the final product, making it more prone to corrosion or breaking under stress. A group of researchers using the U.S. Department of Energy’s Advanced Photon Source (APS) has detailed how such pores are created and defined the best combination of laser energy and scanning speed to avoid causing the defects. Their results were published in the journal Science.

Laser bed powder fusion (LBPF) is the most commonly used additive manufacturing process for metal parts. A laser, guided by a computer, scans over a bed of metal powder, melting it and fusing it to the already hardened layer below. The laser beam creates a keyhole, a deep, roughly cylindrical gap that extends through the powder and into the metal. Laser reflections within the keyhole actually increase energy absorption and increase the efficiency of the process, but sometimes the keyhole can become unstable and break apart, leaving behind voids that get trapped in the finished product.

To understand the dynamics of this process, the international team of researchers performed high-speed x-ray imaging experiments using the X-ray Science Division Imaging Group’s x-ray beamline 32-ID-B at the APS, an Office of Science user facility at Argonne National Laboratory. They imaged the fusion process as the laser moved across a powdered titanium alloy, Ti-6Al-4V, which also contained small amounts of vanadium and aluminum. The high-brightness x-rays from the APS gave them access to a temporal resolution below 1 nanosecond, spatial resolution in micrometers, and imaging at megahertz frame rates, allowing them to watch the formation of keyholes and pores.

They observed that the keyhole moves through the material along with the laser beam, with the bottom narrowing and occasionally lagging slightly behind the top. Sometimes the keyhole can take the shape of a letter J, and the end of that J can pinch off to form a separate bubble. Thermocapillary forces tend to push the bubble back toward the keyhole, where it can merge back into the main cavity. But the collapse of keyhole walls, burst of bubbles, and explosive boiling of liquid metal can all produce acoustic waves that push bubbles away from the keyhole, leaving them behind to form pores when the molten metal solidifies around them (Fig. 1).

The researchers performed their studies with the laser operating at various powers and scan speeds, to produce a power-velocity map. When they held the laser power constant, the maximum size of the pores tended to increase as the scan speed decreased. In the few cases where that did not happen, the researchers believe it was because of variations in the thickness of the powder bed or because the period for which they could perform x-ray imaging was too short to pick up all the pore formation. When the power was decreased, the point at which pore formation increased became increasingly sensitive to the scan speed.

In short, lower power and slower scan speeds made the formation of pores more likely. The researchers say moving the laser beam slowly through the material gives more time for the metal to overheat, causing the keyhole to become more unstable. The boundary between states in which pores form easily and states in which they do not, based on the laser power and scan speed, follows a sharp, smooth curve. That should allow users of additive manufacturing to select parameters that minimize defects.

The researchers say their findings make the origins of pore formations clearer. They also show that acoustic waves generated by the interaction between the laser and the metal play an important role in pushing pores that form near the tip of the keyhole far enough away that they become trapped as the metal hardens. More detailed studies could help elucidate the mechanisms by which these acoustic waves operate.  ― Neil Savage

We acknowledge A. Deriy and F. De Carlo at the APS, and Z. Guo and W. Chen at Purdue University for their technical support of the beamline experiments.  The work was supported by the start-up fund from the Department of Mechanical Engineering at Tsinghua University, the start-up fund from the University of Virginia, the Department of Defense Office of Economic Adjustment under award ST1605-17-02, the National Aeronautics and Space Administration (NASA) University Leadership Initiative program under grant 80NSSC19M0123, and the National Science Foundation under grant 1752218. This research used resources of the Advanced Photon Source, a U.S. DOE Office of Science User Facility operated for the DOE Office of Science by Argonne National Laboratory under Contract No. DE-AC02-06CH11357.