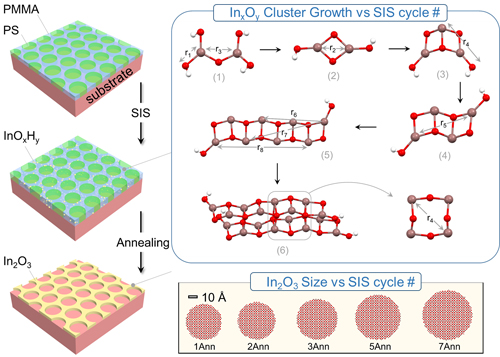 Sequential infiltration synthesis (SIS) is a rapid and efficient method for forming inorganic solids within polymers via alternating exposure to vapor-phase chemical precursors. The resulting hybrid of organic/inorganic materials can then be annealed or etched to remove the organic matrix and yield wholly inorganic materials with exquisite nanoscale morphological complexity inherited from the initial organic polymer template. Potential applications extend to virtually all technologies in which periodic nanomaterial structures are desirable, including optoelectronics, sensors, membranes, photonic crystals, dielectric materials, and electronics. However, the earliest stages of SIS growth remain a mystery, including the atomic structure of nuclei and the evolution of local coordination environments, before and after polymer template removal. Researchers used synchrotron x-ray analysis at the U.S. Department of Energy’s (DOE’s) Advanced Photon Source (APS) to reveal the structural evolution of inorganic cluster growth and crystallization resulting from SIS in polymeric templates. They found that early SIS cycles resulted in InOxHy cluster growth with high aspect ratios (i.e., a length many times that of their width). Additional SIS cycles resulted in the formation of a three-dimensional network. Annealing the mixed inorganic/polymer films in air removed the PMMA template and consolidated the as-grown clusters into cubic In2O3 (indium oxide) nanocrystals. Additional structural details depended on SIS cycle number. These results, published in the journal ACS Nano, suggest InOxHy clusters can be modeled as multinuclear clusters with bonding patterns related to those in In2O3. In(OH)3 (indium hydroxide) crystal structures, meanwhile, suggested that SIS may be an efficient route to producing 3D arrays of discrete-atom-number clusters. In addition, this new approach to characterizing structural growth within the polymer provides fundamental insights into the electrical conductivity of nanoscale electrodes.

Sequential infiltration synthesis, invented about a decade ago by Argonne National Laboratory scientists, is based on atomic layer deposition (ALD), a thin-film deposition technique that uses alternating chemical vapors to grow materials one atomic layer at a time. Unlike ALD, where material is deposited on top of previous layers, SIS involves diffusing vapor into an existing polymer, where it chemically binds with the polymer and eventually grows to create inorganic structures via selective nucleation throughout the entire bulk of the polymer. Using this technique, researchers can tailor the shapes of various metals, oxides, and other inorganic materials by applying them to an organic polymer with SIS and then removing the remains of the polymer through the process of annealing.

SIS has important applications in the semiconductor industry. For example, the technique can be used to create coatings that enable more intricate features to be etched on computer chips, allowing them to become even smaller or to add extra storage and other capabilities. SIS also has the potential to improve solar cell efficiency, anti-reflective surfaces on optics, and water-repellant car windshields.

SIS was first developed to grow a narrow set of materials including Al2O3, ZnO, and TiO2. More recently, though, it has encompassed functional materials including VOx, Ga2O3, SnOx, and In2O3. The technique has been probed by a number of techniques to characterize the mechanisms occurring during synthesis, including quartz crystal microbalance, spectroscopic ellipsometry, and in situ Fourier-transform infrared (FTIR) spectroscopy. While FTIR has revealed functional group chemistry and hinted at some bonding, it is still not clear how the inorganic nuclei grow and interact during the earliest stages of the SIS processes and how the number of SIS cycles affect the short- or long-range order of inorganic nuclei before and after high-temperature annealing.

To answer these questions, researchers at Argonne and The University of Chicago used a multiscale approach involving reciprocal-space x-ray characterization and transmission electron microscopy (TEM) imaging and diffraction analysis. To deduce the local coordination environment and average atomic structure of the InOxHy clusters inside a polymer called poly(methyl methacrylate), or PMMA, they applied extended x-ray absorption fine structure (EXAFS) analysis at the indium (In) K-edge using a 12-element Canberra solid-state Ge detector at the X-ray Science Division (XSD) Spectroscopy Group’s 20-BM x-ray beamline at the APS, an Office of Science user facility at Argonne. They also used high-energy x-ray scattering (HEXS) with atomic pair distribution function (PDF) analysis at the XSD Structural Science Group’s 11-ID-B beamline, also at the APS, to study InOxHy in the PMMA matrix and in thin films after they were annealed (Fig. 1). They were the first group to use the newly developed setup at 11-ID-B to study the structure of amorphous and nanocrystalline thin films in grazing incidence geometry to gain an enhanced signal for fast, high-quality PDF analysis.

The results show that after the first SIS cycle, InOxHy clusters with approximately three coordination shells are present inside the PMMA matrix. Upon additional SIS cycles, these small InOxHy clusters grow by In coordinative addition to terminal oxygen sites, forming structures with high aspect ratio and longer range pair correlations. With extended SIS cycling, these clusters interact with each other to create three-dimensional networks. EXAFS and PDF analysis demonstrate that the structures of these InOxHy clusters can be modeled via the assembly of multinuclear clusters extracted from cubic In2O3 and In(OH)3  structures. Subsequent annealing at high temperature in air was found to not only remove the polymer component but also convert clusters into nanocrystals with increased dimensions as measured by TEM. The atomic structures of nanocrystals vary with the SIS cycle number, as deduced from PDF and EXAFS measurements.

This research will likely advance the fundamental understanding of both local coordination environments and detailed atomic structures of SIS-derived solids, the refined synthesis of which may serve as an efficient route the precision synthesis of discrete-atom-number clusters.

The APS Upgrade Project, when completed, will enable the study of amorphous and nanocrystalline thin films during formation with unprecedented combination of spatial and structural resolution at 11-ID-D.  — Chris Palmer