Human tissues exhibit a remarkable range of properties. A human heart consists mostly of muscle that cyclically expands and contracts over a lifetime. Skin is soft and pliable while also being resilient and tough. And our tendons are highly elastic and strong and capable of repeatedly stretching thousands of times per day. While limited success has been achieved in producing man-made materials that can mimic some of the properties of natural tissues (for instance polymers used as synthetic skin for wound repair) scientists have failed to create artificial materials that can match all the outstanding features of tendons and many other natural tissues. An international team of researchers has transformed a standard hydrogel into an artificial tendon with properties that meet and even surpass those of natural tendons. This new material was examined via electron microscopy and x-ray scattering to reveal the microscopic structures responsible for its outstanding features. The x-ray measurements were gathered at the U.S. Department of Energy’s (DOE’s) Advanced Photon Source (APS). The researchers have shown that their new hydrogel-based material can be modified to mimic a variety of human tissues and could also potentially be adapted to non-biological roles. Their results were published in the journal Nature.

In order to produce artificial tissues, scientists start with materials that share key traits with living tissues. Natural tendons, for instance, are composed of 70% water. Hydrogels are a class of soft materials with an inherently high water content, making them a good starting point for constructing tendons and other synthetic tissues. Considerable effort has been devoted to transforming weak hydrogels into robust artificial tissues by using a variety of processing techniques, such as extruding the hydrogel, stretching it, or inserting microscopic synthetic fibers.

However, these efforts have failed to create materials that can simultaneously match all the outstanding properties of most natural tissues. For example, hydrogels processed to increase their toughness and strength typically show poor stretchability. The researchers in this study have demonstrated hydrogel-based artificial tendons with performance parameters that rival or even exceed those of their natural counterparts. The synthetically derived tendons exhibited very high stress resistance coupled with a toughness 10 times greater than natural tendon. Furthermore, the simulated tendons readily endured 30,000 stretch-and-release cycles without failure.

The new synthetic materials were created by applying the processes of freeze-casting and salting-out to a hydrogel consisting of polyvinyl alcohol (PVA) polymers disbursed in an aqueous solution. Freeze-casting was first applied to directionally freeze the polymer solution, meaning that the solution initially froze at one end and then continued freezing to the other end. After the water was extracted, a highly porous, sponge-like solid remained. The salting-out process was then applied. The porous solid was immersed in a concentrated salt solution, which caused the microscopic polymers to clump together to form tiny fibrous bundles. The end result was a highly anisotropic (directionally oriented) material with outstanding properties.

The highly modified hydrogel was examined using scanning electron microscopy (SEM) along with two complimentary x-ray techniques, small angle x-ray scattering (SAXS) and wide angle x-ray scattering (WAXS), both performed at the X-ray Science Division Dynamics & Structure Group’s 8-ID-E x-ray beamline of the APS, an Office of Science user facility at Argonne National Laboratory (Fig. 1). Together these imaging techniques revealed that the modified hydrogel formed distinct structures over multiple length scales, from the nanoscale to the millimeter level (Fig. 2). Such multi-scale structures are reminiscent of those seen in natural tendons, and were responsible for the modified hydrogel's exceptional strength, toughness, stretchability, and fatigue resistance. 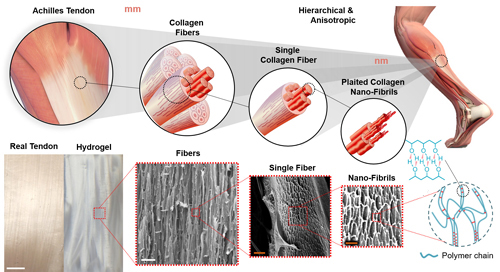 The researchers demonstrated the adaptability of their new hydrogel-based material by varying its stiffness and other properties, including making it electrically conducting by infusing it with conductive polymers, all without reducing strength and toughness.

The researchers further note that the processes they developed for PVA-based hydrogel can be applied to other types of polymers and compounds, which they also demonstrated by greatly increasing the strength and toughness of alginate and gelatin hydrogels, both notoriously weak materials.  — Philip Koth