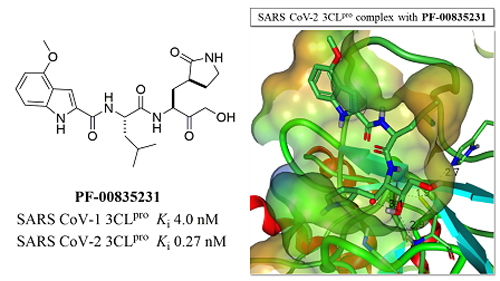 Science can be a capricious endeavor. Research can make unexpected leaps or come to a screeching halt when new information becomes available. This was the case with research into inhibitors for the 3C-like cysteine protease (3CLPRO) of SARS-CoV-1, the coronavirus that caused the outbreak of sudden acute respiratory syndrome (SARS) in 2002 that killed 799 people. When the current pandemic started and the SARS-CoV-2 virus was identified as the cause, comparison of the new virus to known viruses showed that the 3CLPRO proteins from SARS-CoV-1 and SARS-CoV-2 have 96% sequence identity and are 100% identical with regard to amino acids in the active site. This was incentive for the team to solve the structure of PF-00835231 (a particularly promising variant of a SARS-CoV-1 protease inhibitor they had been working on) in complex with the 3CLPRO from both coronaviruses in the hope that PF-00835231 would also inhibit the SARS-CoV-2 protease. This study by researchers from Pﬁzer Worldwide Research and Development and the Southern Research Institute was carried out using the U.S. Department of Energy’s Advanced Photon Source (APS) at Argonne National Laboratory and the results were published in the Journal of Medicinal Chemistry.

In 2002, researchers hoped to develop a treatment for SARS using PF-00835231. This molecule was one of a series of inhibitors developed based on careful chemical modification of a starting “warhead” that had been successful in development of an inhibitor for a similar protease from another virus. Using structure activity relationships and x-ray co-crystal structural data of inhibitors in complex with the SARS-CoV-1 3CLPRO to modify the warhead and design portions to mimic the viral protein substrates that specifically interact with the protease, PF-00835231 was the most promising candidate against the SARS protease. However, in the case of SARS, the public health response was successful, and the research program was suspended as it was no longer needed.

Fast-forward 18 years and PF-00835231 is back in the limelight as the focus of research into treatments to block the spread of SARS-CoV-2, the coronavirus that is the cause of COVID-19 and the 2020 pandemic.

The initial research project in 2002 focused on the development of compounds designed to inhibit the SARS-CoV-1 protease, 3CLPRO. The 3CLPRO protein acts at the start of viral entry into the host cell to cleave two SARS-CoV-1 polyproteins into multiple active proteins needed for viral infection and replication. This is why researchers hypothesized that inhibiting this step could inhibit viral replication and spread. PF-00835231 had been chosen because it strongly inhibited the SARS-CoV-1 3CLPRO, had excellent stability, and had solubility characteristics that suggested it would be appropriate for intravenous administration.

The x-ray diffraction data in the current study were collected at the Industrial Macromolecular Crystallography Association Collaborative Access Team (IMCA-CAT) 17-ID beamline of the APS by a team of researchers from Pfizer Worldwide Research and the Southern Research Institute. (The APS is a U.S. Department of Energy Office of Science user facility at Argonne.) The crystal structures (Fig. 1) show that the two proteases are almost identical with conserved catalytic residues in their ligand binding sites and nearly identical structures.  PF-00835231 binds in the same way to both proteases, forming a covalent bond to an active site cysteine (Cys 145) and forming hydrogen bonds with a number of other key active site amino acids.

Evaluation of the inhibitory activity of number PF-00835231 against the SARS-CoV-2 3CLPRO demonstrated that it is a very potent inhibitor of the enzyme that showed selectivity for coronavirus enzymes among a panel of other viral and human proteases.  PF-00835231 had potent and selective antiviral activity against both SARS-CoV-1 and another coronavirus but not other viruses in the panel.  Further preclinical evaluation of PF-0835231 demonstrated that this molecule displays potent anti-viral inhibition of SARS CoV-2 which has led to the development of the phosphate prodrug PF-07304814 that has entered clinical trials as a potential treatment for COVID-19.  ― Sandy Field

This research used resources at the Industrial Macromolecular Crystallography Association Collaborative Access Team (IMCA-CAT) beamline 17-ID, supported by the companies of the Industrial Macromolecular Crystallography Association through a contract with Hauptman-Woodward Medical Research Institute. This research used resources of the Advanced Photon Source, a U.S. Department of Energy (DOE) Office of Science User Facility, operated for the DOE Office of Science by Argonne National Laboratory under Contract No. DE-AC02-06CH11357. Extraordinary facility operations were supported in part by the DOE Office of Science through the National Virtual Biotechnology Laboratory, a consortium of DOE national laboratories focused on the response to COVID-19, with funding provided by the Coronavirus CARES Act.