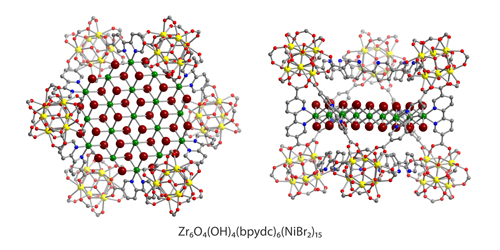 Iron, nickel, and cobalt are the classic magnetic elements. From them we make everything from the magnets that stick to your fridge to the computer chips in your phone. But in all these familiar applications, the metals are in their bulk, three-dimensional (3-D) forms. A group of researchers used porous metal-organic frameworks to coax nickel, iron, and cobalt to join with the halogens bromine and chlorine in single, hexagonal sheets. Experiments performed at the U.S. Department of Energy’s Advanced Photon Source (APS) helped confirm that these sheets were, indeed, two-dimensional (2-D) molecules of metal halides. The work, published in the journal Nature, could lead to much smaller, more powerful computers and other magnetic devices.

Many scientists would like to study 2-D transition metal salts such as iron chloride (FeCl2) and nickel bromide (NiBr2). But producing these materials has been a challenge. Researchers from the University of California, Berkeley, Lawrence Berkeley National Laboratory, and the Missouri University of Science and Technology invented a novel way of making them. They used metal-organic frameworks made of zirconium bipyridine dicarboxylate as a template for the transition metal halide crystals. The pores of the metal-organic framework had regularly spaced pairs of nitrogen atoms, referred to as pyridine anchoring sites. Nickel, cobalt, or iron atoms attach to those anchoring sites and the sheets of metal halide grow outward from there. The researchers calculated the spacing of the pyridine attachment sites to grow nearly perfect sheets without defects (see Fig. 1).

Nickel chloride (NiCl2) sheets formed just as well in the bipyridine framework as the NiBR2, even though the bond lengths between nickel and chlorine are shorter than those between nickel and bromine. The researchers believe this is because the metal-organic framework is flexible enough to allow the initial metal attachment spots to move and accommodate the tighter lattice. Cobalt and iron chloride also grew using the same framework.

The team used multiple techniques to characterize these 2-D sheets and ensure they’d really made two dimensional sheets of transition metal halides. First, they used Advanced Light Source beamline 11.3.1, an Office of Science user facility at Lawrence Berkeley National Laboratory, to take single-crystal x-ray diffraction snapshots of 2-D crystals of metal halide as they formed. They were able to discern differences in crystal growth between the chlorides and the bromides, but the basic structure was the same: a single layer of metal and halide in a pore.

The team then turned to the X-ray Science Division Structural Science Group’s beamline 17-BM-B of the APS, an Office of Science user facility at Argonne National Laboratory. The extreme brightness of the APS x-rays enable high-quality data, and the beamline scientists have set up 17-BM-B to make it easy to collect high-quality powder diffraction data from diverse materials, according to the research team. This allowed the team to collect x-ray diffraction patterns from the bulk powdered material. The APS data was essential for confirming that the same tiny, 2-D hexagonal sheets of metal halide had formed throughout.

The researchers were initially surprised that the metal-organic frameworks with pyridine anchoring sites worked so well. They had planned on testing and tweaking many different crystalline structures to find one that worked.

They were also surprised that the 2-D metal halide sheets had large magnetic moments. The normal, 3-D bulk materials usually need to be polarized with a large magnetic field to have a discernible magnetic moment, otherwise the many layers of metal orient in various directions to cancel each other out. But the lone sheets formed in the nanopores have nothing with which to cancel themselves out.

These tiny molecular magnets could someday store information at a very small scale, leading to faster computing in a smaller device footprint. Currently, most magnetic computer memories operate at scales on the many tens of nanometers, at least an order of magnitude larger than what these two-dimensional sheets of metal halides could do. The next steps will involve exploring how to engineer computer memories at these tiny, molecular sizes.

The APS upgrade will enhance the beamline 11-ID-D to a high-energy x-ray beamline working in the photon energy range between 26 to 120 keV. It will enable fast measurements and extend the range of structural distances measured simultaneously.  ― Kim Krieger

This research was supported through a Multidisciplinary University Research Initiatives Program funded by the U.S. Department of Defense, Office of Naval Research, under award N00014-15-1-2681. . We thank the U.S. National Science Foundation for providing graduate fellowship support for A.B.T, L.E.D. and J.O. The Advanced Light Source is supported by the Director, Office of Science-Basic Energy Sciences, of the U.S. Department of Energy (DOE) under contract no. DE-AC02-05CH11231. Work at the Molecular Foundry was supported by the Office of Science-Basic Energy Sciences, of the U.S. DOE under contract no. DE-AC02-05CH11231. This research used resources of the Advanced Photon Source, a U.S. DOE Office of Science User Facility operated for the DOE Office of Science by Argonne National Laboratory under Contract No. DE-AC02-06CH11357.