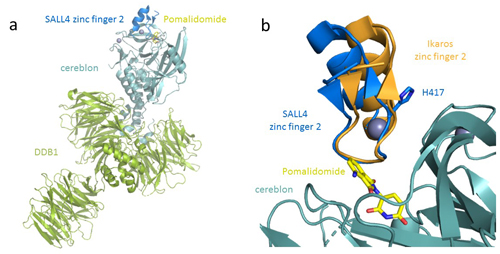 Sold in the 1950s and early 1960s as a sedative and cure for morning sickness in pregnant women, thalidomide was banned in 1961 after it was found to have caused an epidemic of severe birth defects. Thalidomide binds to a protein called cereblon, which marks other proteins for destruction and removal from the cell. Thalidomide-dependent degradation of the embryonic transcription factor SALL4 may explain thalidomide’s deleterious effects on development. Using intense, high-brightness x-rays from the U.S. Department of Energy’s Advanced Photon Source and macromolecular crystallography, researchers from Celgene Corporation captured the atomic-level structure of the second zinc finger of SALL4 in complex with thalidomide analog pomalidomide and other molecules. This structure revealed the molecular details of SALL4 recruitment. The crystal structure also indicated that the binding position of SALL4 was shifted relative to that of Ikaros, another transcription factor degraded by cereblon. The researchers also discovered amino acid residue sequence differences between SALL4 and Ikaros. These differences may suggest a path toward the rational design of cereblon-binding drugs that target proteins involved in diseases such as multiple myeloma, while sparing SALL4 and thereby reducing the risk of birth defects. These results were published in the journal Nature Structural & Molecular Biology.

Thalidomide hijacks cereblon and causes it to induce the de novo degradation of non-native proteins, neosubstrates. Among these neosubstrates is SALL4, which is essential for limb development. Mutations in the gene that produces SALL4 are known to cause two conditions—Duane Radial Ray syndrome and Holt-Oram syndrome—that can result in birth defects like those seen in babies exposed to thalidomide in utero. Recent studies demonstrated that thalidomide and one of its derivatives, pomalidomide, potently induce the cereblon-dependent degradation of endogenous SALL4 in human embryonic stem cells and induced pluripotent stem cells.

Thalidomide along with analogs lenalidomide and pomalidomide are approved drugs for the treatment of leprosy, multiple myeloma, and various hematological disorders. These drugs are cereblon E3 ligase modulators, or CELMoDs. They bind to cereblon, altering its surface to create a neomorphic interface for recruitment of target proteins, such as Ikaros, Aiolos, and several other recently identified zinc finger proteins. Structural and biochemical studies have demonstrated that these neosubstrates bind cereblon through a structural feature composed of a β-hairpin turn with a glycine at a conserved position.

Understanding the molecular basis of thalidomide’s disruption to development will be critical for creating safer therapeutics that spare SALL4 while effectively degrading proteins of interest. Toward this goal, the team of researchers at the Celgene Corporation determined the crystal structure of human SALL4 zinc-finger 2 (ZF2) bound to cereblon and the protein DDB1 through pomalidomide at 3.6 Å resolution, using data collected at the Lily Research Laboratories Collaborative Access Team (LRL-CAT) beamline 31-ID-D at the APS (Fig. 1). The crystal structure confirmed that SALL4 is recruited to cereblon through the same β-hairpin as other neosubstrates. (The APS is an Office of Science user facility at Argonne National Laboratory.)

Despite the similarities to other cereblon-bound neosubstrates, SALL4 exhibits a shift in binding position, with the zinc finger rotated about 15 degrees compared with Ikaros. In addition to the observed changes in backbone position, the crystal structure revealed a number of sidechain differences between Ikaros and SALL4.

The researchers then performed mutagenesis of the amino acid residue H417A in SALL4, which enabled SALL4 to conform to the binding mode exhibited by Ikaros, whose conformation appears to have more favorable binding energetics.

The differences in both amino acid composition and backbone position of SALL4 compared with other neosubstrates such as Ikaros could provide a framework for the creation of CELMoDs or other molecules that successfully degrade target proteins with reduced risk of disturbed development.  ― Chris Palmer

Use of the Lilly Research Laboratories Collaborative Access Team (LRL-CAT) beamline was provided by Eli Lilly and Company, which operates the facility. This research used resources of the Advanced Photon Source, a U.S. Department of Energy (DOE) Office of Science User Facility operated for the DOE Office of Science by Argonne National Laboratory under contract no. DE-AC02-06CH11357.