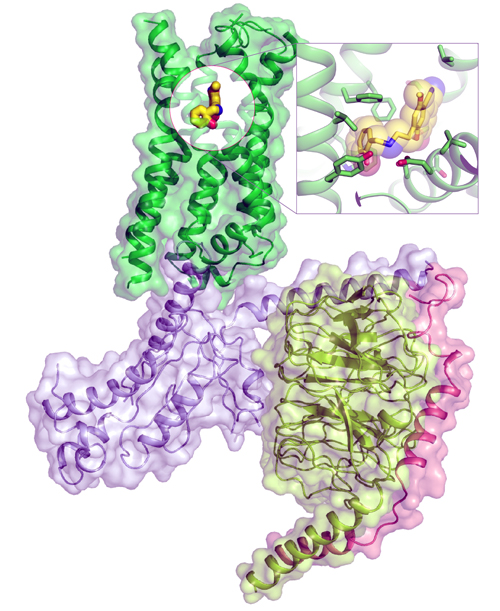 The original University of North Carolina at Chapel Hill School of Medicine press release by Mark Derewicz can be read here.

The stage is set for the discovery of new kinds of antidepressants, anti-anxiety drugs, and treatments for substance use disorders, thanks to research by a multi-institution collaboration led by scientists from the University of North Carolina at Chapel Hill School of Medicine and the Stanford University School of Medicine. Their results, based in large part on studies carried out at two U.S. Department of Energy national research facilities including the Advanced Photon Source at Argonne National Laboratory, were published in the journal Cell.

Psychedelic drugs such as LSD, psilocybin, and mescaline cause severe and often long-lasting hallucinations, but they show great potential in treating serious psychiatric conditions, such as major depressive disorder. To fully investigate this potential, scientists need to know how these drugs interact with brain cells at the molecular level to cause their dramatic biological effects. Scientists at UNC-Chapel Hill and Stanford have just taken a big step in that direction.

For the first time, scientists in the UNC lab of Bryan L. Roth and the Stanford lab of Georgios Skiniotis solved the high-resolution structure of these compounds when they are actively bound to the 5-HT2A serotonin receptor (HTR2A) that is found on the surface of brain cells.

This discovery is already leading to the exploration of more precise compounds that could eliminate hallucinations but still have strong therapeutic effects. Scientists could effectively alter the chemical composition of drugs such as LSD and psilocybin – the psychedelic compound in mushrooms that has been granted breakthrough status by the FDA to treat depression.

“Millions of people have taken these drugs recreationally, and now they are emerging as therapeutic agents,” said co-senior author Roth, the Michael Hooker Distinguished Professor of Pharmacology at the University of North Carolina School of Medicine. “Gaining this first glimpse of how they act at the molecular level is really important, a key to understanding how they work. Given the remarkable efficacy of psilocybin for depression (in Phase II trials), we are confident our findings will accelerate the discovery of fast-acting antidepressants and potentially new drugs to treat other conditions, such as severe anxiety and substance use disorder.”

Scientists believe that activation of HTR2A, which is expressed at very high levels in the human cerebral cortex, is key to the effects of hallucinogenic drugs. “When activated, the receptors cause neurons to fire in an asynchronous and disorganized fashion, putting noise into the brain’s system,” said Roth, who holds a joint faculty appointment at the UNC Eshelman School of Pharmacy. “We think this is the reason these drugs cause a psychedelic experience. But it isn’t at all clear how these drugs exert their therapeutic actions.”

In the current study, Roth’s lab collaborated with Skiniotis, a structural biologist at the Stanford University School of Medicine. “A combination of several different advances allowed us to do this research,” Skiniotis said. “One of these is better, more homogeneous preparations of the receptor proteins. Another is the evolution of cryo-electron microscopy (cryo-EM) technologies, which allow us to visualize and reconstruct high resolution maps of challenging complexes without having to crystalize them.”

Roth credits co-first author Kuglae Kim, PhD, a postdoctoral fellow in his lab, for steadfastly exploring various experimental methods to purify and stabilize the very delicate serotonin receptors. “Kuglae was amazing,” Roth said. “I’m not exaggerating when I say what he accomplished is among the most difficult things to do. Over three years in a deliberate, iterative, creative process, he was able to modify the serotonin protein slightly so that we could get sufficient quantities of a stable protein to study.”

The research team used Kim’s work to reveal the first x-ray crystallography structure of LSD bound to HTR2A, obtained at the National Institute of General Medical Sciences and National Cancer Institute (GM/CA-XSD) structural biology x-ray beamline 23-ID-B at the Advanced Photon Source using a 10-mm minibeam at a wavelength of 1.0330 A˚, and at beamline 17ID-2 of the National Synchrotron Light Source II at Brookhaven National Laboratory. (The Advanced Photon Source and the National Synchrotron Light Source II are Office of Science user facilities.) Stanford investigators then used cryo-EM at the Stanford facility at SLAC to record images of a prototypical hallucinogen, called 25-CN-NBOH, bound together with the entire receptor complex, including the effector protein Gαq. In the brain, this complex controls the release of neurotransmitters and influences many biological and neurological processes. A cryo-EM reconstruction from thousands of images provided a detailed map of the complex, which Kim used to model the exact structure of HTR2A at the level of amino acids – the basic building blocks of proteins such as serotonin receptors.

Roth and colleagues are now applying their findings to structure-based drug discovery for new therapeutics. One of the goals is to discover potential candidates that may be able offer therapeutic benefit without the psychedelic effects.

“The more we understand about how these drugs engage and affect the structure and behavior of these receptors, the better we’ll understand their signaling properties,” Skiniotis says. “This work doesn’t give us the whole picture yet, but it’s a central piece of the puzzle.”