Crystals Could Reveal a New Spin on Quantum Physics 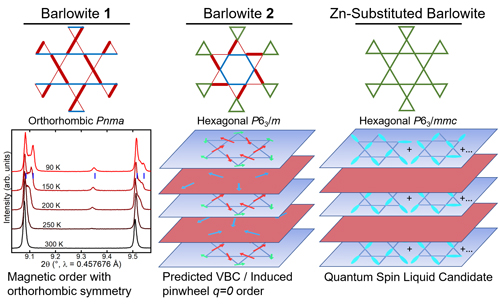 Physicists would like to know whether a theorized new state of matter, called a quantum spin liquid, actually exists. They believe the state, which arises at temperatures close to absolute zero, may occur in the mineral herbertsmithite, and are trying to synthesize new materials to look for this ground state. One multi-institution group of researchers, using the U.S. Department of Energy’s Advanced Photon Source (APS) at Argonne National Laboratory, thinks they may have found a rare state very similar to a quantum spin liquid. Their results were published in the journal Quantum Materials.

Spin is a quantum mechanical property of electrons, and can be visualized as a pole sticking through a globe. In most ordinary materials, the spins are oriented at random, but in magnetic materials, the spins all align either parallel or antiparallel to each other. In a quantum spin liquid, however, the spins of neighboring electrons line up in opposite directions—one pointing north, the next south—but instead of being frozen in place as in other materials, those spins can continually flip in a correlated manner. Though the material itself isn’t a liquid in the traditional sense, the spin correlations can flow back and forth like a liquid.

To investigate, the researchers created four different versions of another copper-containing mineral, barlowite. Two of the versions have almost the same crystalline lattice with just minor distortions, which should result in different low-temperature ground states. Introducing different amounts of zinc into the mix in the other two versions yields a crystalline structure that the scientists believe should result in a quantum spin liquid.

Once they’d synthesized the crystals, the researchers performed single-crystal x-ray diffraction measurements at the ChemMatCARS beamline 15-ID at APS, which gives detailed information on the position of atoms in the crystalline lattice (Fig. 1). They also did powder x-ray diffraction measurements on powdered crystals at X-ray Science Division (XSD) beamline 11-BM, which is operated at the APS by the XSD Structural Science Group. Both beamlines have helium cryostats that allow samples to be reduced to extremely low temperatures, where the magnetic phenomena the researchers are interested in take place. (The APS is an Office of Science user facility at Argonne.)

Combining the measurements, along with similar data gathered at the DOE’s Advanced Light Source at Lawrence Berkeley National Laboratory allowed them to draw a picture of structural phase transitions in the compounds. Neutron diffraction measurements at the High Flux Isotope Reactor (HFIR) at the DOE’s Oak Ridge National Laboratory and at the Center for Neutron Research at the U.S. Department of Commerce’s National Institute of Standards and Technology provided information about the materials’ magnetic states, which the researchers then combined with the APS data to see how structure was affecting magnetism.

In one of the two distorted compounds, the researchers think they’ve found a valence bond crystal, which has a ground state energy very close to that of the spin liquid. Instead of constantly fluctuating magnetic moments like the spin liquid, such crystals have their spins frozen in place.  The zinc-containing versions give hints of having a quantum spin liquid state, although it will take more study to confirm that.

Finding quantum spin liquid materials could lead to other possibilities. If crystals with quantum spin liquid physics are doped with charge carriers, they might become high-temperature superconductors. They also exhibit long-range entanglement, in which the spins of electrons at far ends of the sample can share information with one another.  Such distant interaction is very unusual; generally when an electron inside a material is linked to another, it’s only with the ones closest to it. Spin liquid crystals also have properties that might make them useful as bits in future quantum computers. Such applications lie many years or decades in the future.

The work at Stanford and SLAC was supported by the U.S. Department of Energy (DOE) Ofﬁce of Science-Basic Energy Sciences, Materials Sciences and Engineering Division, under contract no. DE-AC02-76SF00515; this includes the synthesis, physical property measurements, neutron scattering, x-ray scattering, and numerical simulations. A portion of this research used resources at the HFIR, a DOE Ofﬁce of Science User Facility operated by the Oak Ridge National Laboratory. We acknowledge the support of the National Institute of Standards and Technology, U. S. Department of Commerce, in providing the neutron research facilities used in this work. The Advanced Light Source is a DOE Ofﬁce of Science User Facility under contract no. DE-AC02-05CH11231. ChemMatCARS is supported by the Divisions of Chemistry (CHE) and Materials Research (DMR), National Science Foundation (NSF), under grant number NSF/CHE-1834750. Use of the PILATUS3 X CdTe 1M detector is supported by the NSF under grant number NSF/DMR-1531283. This research used resources of the Advanced Photon Source, a U.S. DOE Office of Science User Facility operated for the DOE Office of Science by Argonne National Laboratory under Contract DE-AC02-06CH11357. Part of this work was performed at the Stanford Nano Shared Facilities, supported by the NSF under award ECCS-1542152. R.W.S. was supported by the Department of Defense through the NDSEG Fellowship Program and by an NSF Graduate Research Fellowship (DGE- 1656518).