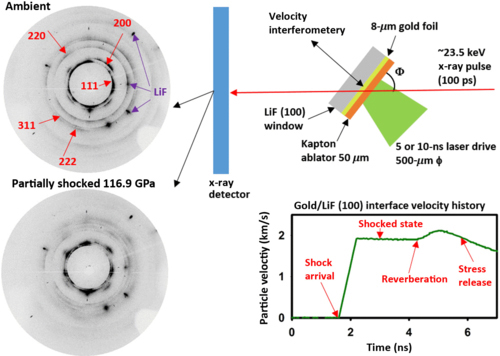 Put any solid material under enough pressure, and its structure will be changed, either temporarily or permanently.  But pressure comes in different forms: it can be a steady, even force that induces gradual and predictable alterations in atomic structure, or a short, sudden shock that causes abrupt and unpredictable change.  Studying how a material responds to all types of pressure under different thermodynamic conditions is vital to understanding its properties at the microscopic scale and determining its equation-of-state data.  The nanosecond time scale of shock compression phenomena makes them difficult to observe, compared to static compression studies.  To overcome such challenges, a team of researchers from Washington State University (WSU) utilized high-brightness x-rays from the U.S. Department of Energy’s Advanced Photon Source (APS) to achieve the first real-time, in situ experimental observations of shock-induced stacking faults in gold using x-ray diffraction (XRD) studies.  Their results were published in Physical Review X.

Gold is a well-studied representative monatomic cubic metal, used as a pressure standard with an established equation-of-state, so it was an excellent candidate for this work.  Its face-centered-cubic (fcc) structure provides a good window into shock-induced changes that can be observed through the shifting of Bragg peaks in XRD experiments.  The WSU conducted its work at the Dynamic Compression Sector beamline 35-ID of the APS, an Office of Science user facility at Argonne National Laboratory, using laser pulses to ablate a thin Kapton® film (Fig. 1), creating shock waves, which propagated into a gold-foil sample and were observed via XRD (Fig. 2). 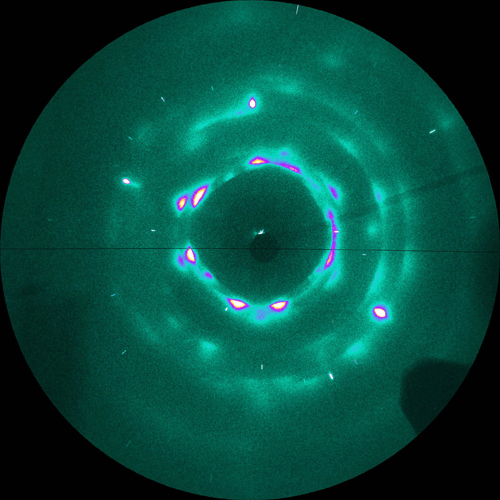 Unlike static pressure, which produces isotropic compression, shock waves create uniaxial compression resulting in significant shear strains which produce lattice defects.  Such shock-induced lattice defects have not as yet been adequately studied in experimental results.  These defects in the form of dislocations and stacking faults also change XRD patterns through both broadening and shifting of Bragg peaks.  The research team took these phenomena into account by computing simulated diffraction profiles and using them in the analysis of their experimental results.

The series of experiments demonstrated that stacking faults (and partial dislocations) contribute significantly to plastic deformation under high-pressure shock compression.  Previous experiments and molecular dynamics (MD) simulations have claimed to observe or predict the same effects in aluminum and copper, but those findings were ambiguous and not confirmed.  Although no MD simulations of shock compression in gold are as yet available for a quantitative comparison with these experimental observations, characteristics of the shock-induced stacking faults seen here are qualitatively similar to other MD studies.  The present work is the first confirmed, real-time, in situ experimental observation of stacking faults caused by shock-wave compression in a fcc material.

Because the XRD peak shifting due to shock-induced stacking faults in fcc metals is hkl dependent, determining volume compression in the shock-compressed gold samples based solely on analyzing a single XRD line can lead to inaccurate results.  Instead, the experimenters suggest that analysis using multiple peaks better accounts for the XRD effects induced by the presence of a significant number of stacking faults.  Comparison between different high-pressure XRD studies should also consider the differences in the observed diffraction patterns arising from the absence of these structural defects in static compression and their marked presence in shock-compressed samples.

The findings seen in this work confirm that density and pressure results are not enough to detect the plastic deformation in shock-compressed fcc metals.  X-ray diffraction studies are needed to fully characterize the shocked state of these materials at the microscopic level.  For example, these experiments reveal that the state of shock-compressed gold is not isotropic as previously speculated, and that high-temperature annealing of possible structural defects is not likely, at least on a nanosecond timescale.  Such findings may have important implications for the use of gold as a diamond anvil cell pressure standard, or in applications for other similarly structured metals.

Using a variety of experimental methods to complement and supplement each other assures the most complete understanding of such a complex phenomenon as the effects of pressure on solid materials.  As the present work shows, it can also provide fresh perspectives that lead to new and important questions.  ― Mark Wolverton

Yuelin Li, Adam Schuman, Nicholas Weir, and Jun Zhang at the Dynamic Compression Sector are gratefully acknowledged for their expert assistance with the experiments. This publication is based upon work supported by the U.S. Department of Energy (DOE), National Nuclear Security Administration (NNSA) under Award No. DE-NA0002007. The Dynamic Compression Sector is operated by Washington State University under DOE/NNSA Award No. DE-NA0002442. This research used resources of the Advanced Photon Source, a U.S. DOE Office of Science User Facility operated for the U. S. DOE Office of Science by Argonne National Laboratory under Contract No. DE-AC02-06CH11357.