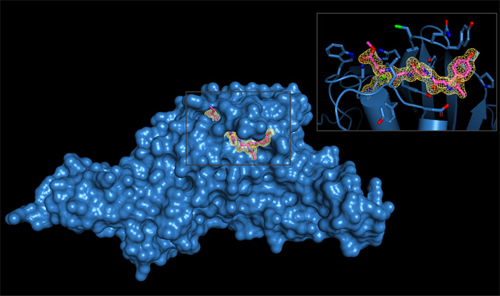 The original University of Texas Health Science Center at San Antonio news release by Will Sansom can be read here.

American and Polish scientists, reporting in the journal Science Advances, laid out a novel rationale for COVID-19 drug design – blocking a molecular “scissor” that the virus uses for replication and to disable human proteins crucial to the immune response. The researchers are from The University of Texas Health Science Center at San Antonio (UT Health San Antonio) and the Wroclaw University of Science and Technology. Information gleaned by the American team, obtained from the U.S. Department of Energy’s Advanced Photon Source (APS) at Argonne National Laboratory, helped Polish chemists to develop two molecules that inhibit the cutter, an enzyme called SARS-CoV-2-PLpro.

“This enzyme executes a double-whammy,” Olsen said. “It stimulates the release of proteins that are essential for the virus to replicate, and it also inhibits molecules called cytokines and chemokines that signal the immune system to attack the infection.”

Olsen’s team, which recently moved to the Long School of Medicine at UT Health San Antonio from the Medical University of South Carolina, solved the three-dimensional structures of SARS-CoV-2-PLpro and the two inhibitor molecules, which are called VIR250 and VIR251. The structures were solved with molecular x-ray crystallography using the 24-ID-C x-ray beamline (and EIGER2 detector) operated by the Northeastern Collaborative Access Team at the APS (the APS is a DOE Office of Science user facility at Argonne).

“Our collaborator, Marcin Drag, and his team developed the inhibitors, which are very efficient at blocking the activity of SARS-CoV-2-PLpro, yet do not recognize other similar enzymes in human cells,” Olsen said. “This is a critical point: The inhibitor is specific for this one viral enzyme and doesn’t cross-react with human enzymes with a similar function.”

Specificity will be a key determinant of therapeutic value down the road, he said.

The American team also compared SARS-CoV-2-PLpro against similar enzymes from coronaviruses of recent decades, SARS-CoV-1 and MERS.  They learned that SARS-CoV-2-PLpro processes ubiquitin and ISG15 much differently than its SARS-1 counterpart.

“One of the key questions is whether that accounts for some of the differences we see in how those viruses affect humans, if at all,” Olsen said.

By understanding similarities and differences of these enzymes in various coronaviruses, it may be possible to develop inhibitors that are effective against multiple viruses, and these inhibitors potentially could be modified when other coronavirus variants emerge in the future, he said.

This project was supported by the National Science Center grant 2015/17/N/ST5/03072 (Preludium 9) in Poland (W.R.) and the “TEAM/2017-4/32” project, which is carried out within the TEAM program of the Foundation for Polish Science, co-financed by the European Union under the European Regional Development Fund (M.D.). W.R. is a beneficiary of a START scholarship from the Foundation for Polish Science. Research reported in this publication was supported by CPRIT RR200030 and NIH R01 GM115568 (S.K.O.), ES025166 (T.T.H.), and GM099040 (S.J.S.). Z.L. is a Hollings Cancer Center Postdoctoral Fellow, and S.P. is an American Cancer Society Postdoctoral Fellow (PF-18-235-01-RMC). The Northeastern Collaborative Access Team is funded by the National Institute of General Medical Sciences from the National Institutes of Health (P30 GM124165). This research used resources of the Advanced Photon Source, a U.S. Department of Energy (DOE) Office of Science User Facility operated for the DOE Office of Science by Argonne National Laboratory under contract no. DE-AC02-06CH11357. Extraordinary facility operations were supported in part by the DOE Office of Science through the National Virtual Biotechnology Laboratory, a consortium of DOE national laboratories focused on response to COVID-19, with funding provided by the Coronavirus CARES Act.