A Novel, Potent Pharmaceutical for the Treatment of Prostate Cancer 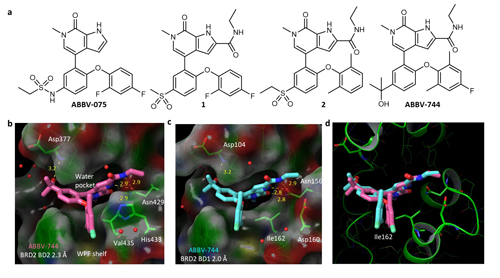 Prostate cancer is a debilitating, age-related disease that is a leading cause of cancer death in men. Although research efforts have developed treatment options to improve patient outcomes, the overall mortality rate remains high compared to other cancer types. As such, there is a dire need for improved therapeutics that can increase patient survival. With this clinically paramount goal in mind, the research team in this study, published in the journal Nature, developed a novel, high-potential pharmaceutical for the treatment of prostate cancer. This compound, named “ABBV-744,” is a potent and specific inhibitor of the BET protein family. In a mouse prostate cancer model, treatment with ABBV-744 reduced tumor volume and caused fewer side effects compared to a previously identified BET inhibitor. X-ray diffraction data were collected at the U.S. Department of Energy’s Advanced Photon Source (APS) to better understand the interaction between ABBV-744 and its protein target. While this novel compound ultimately needs to undergo rigorous clinical testing to assess its safety and efficacy, it harbors exciting potential for the treatment of prostate cancer.

In biology, epigenetic modifications refer to gene regulatory mechanisms that are independent of DNA sequence. A classic example of this is histone acetylation. DNA is the blueprint used for the construction of genes; a process referred to as transcription. Since our cells contain an inordinate amount of DNA, it must be very strategically packaged and organized by proteins called histones. When the chemical group acetyl is transferred to a histone, it changes its chemical structure and promotes the utilization of DNA to produce genes. This promotion of gene expression is reversed by the removal of an acetyl group from histones. Thus, histone acetylation and deacetylation play very important regulatory roles in biology.

Genes are ultimately translated into proteins, which are the primary cellular workers. Proteins that are part of the bromodomain and extraterminal (BET) family are epigenetic readers that recognize acetyl groups on histones. They additionally bind to acetylated histones, thereby regulating the expression of genes. Key protein members of this family include BRD2, BRD3, BRD4, and BRDt, each of which contains the two different bromodomains BD1 and BD2. Previously, inhibitors of both bromodomains have shown modest activity in cancer clinical trials. Unfortunately, these inhibitors have been associated with undesirable side effects such as a low blood platelet count and gastrointestinal toxicity. The genetic suppression of the BET gene Brd4 in mice causes similar adverse symptoms. Since a desirable oncology drug is one that can combat cancer with minimal or tolerable side effects, ideally a new generation of BET inhibitors would be designed that can more safely mediate anti-cancer effects.

These researchers, from AbbVie, theorized that the inhibition of just one bromodomain (i.e., BD1 vs. BD2) may mediate anti-cancer effects more safely. To test this, they performed a medical chemistry screen to identify ABBV-744, a potent and selective BD2 domain inhibitor. To better understand the interaction between this pharmaceutical and the BD2 domain, x-ray diffraction data were collected at the Industrial Macromolecular Crystallization Association Collaborative Access Team (IMCA-CAT) 17-ID beamline at the APS (the APS is an Office of Science user facility at Argonne National Laboratory).

This drug was anti-proliferative in acute myeloid leukemia and prostate cancer cell lines. More impressively, in a mouse model of prostate cancer, ABBV-744 was able to reduce tumor volume while minimizing gastrointestinal and platelet side effects. These side effects were notably milder compared to an inhibitor of both bromodomains. A detailed molecular analysis also revealed that ABBV-744 preferentially inhibits the expression of Androgen Receptor (AR)-dependent genes.  ― Stephen Taylor

IMCA-CAT is supported by the companies of the Industrial Macromolecular Crystallography Association through a contract with Hauptman-Woodward Medical Research Institute. This research used resources of the Advanced Photon Source, a U.S. DOE Oﬃce of Science User Facility operated for the DOE Oﬃce of Science by Argonne National Laboratory under contract no. DE-AC02-06CH11357.