Obstacles to Sodium-Ion Battery Performance: When Too Much Order is a Bad Thing 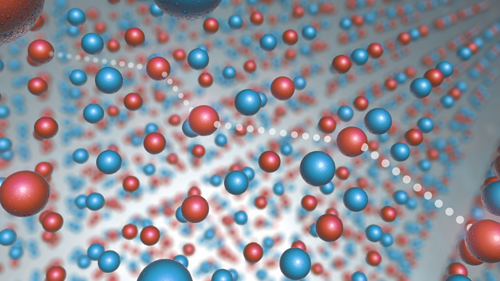 A basic principle of rechargeable batteries is the reversible shuttling of ions (electrically-charged atoms or molecules) between their cathode and anode. The most popular rechargeable battery type is the lithium-ion (Li-ion) battery, which began development in the 1970s. Around the same time the sodium-ion battery was also investigated, but the lithium type eventually prevailed. Interest in sodium-ion (Na-ion) batteries has recently reemerged since they are cheaper, safer, and less reliant on strategically-important elements than are Li-ion batteries. The performance of both battery types is affected by how efficiently lithium (or sodium) ions move into and out of the positively-charged cathode during charging and discharging. To gain greater insight into this process, researchers probed sodium ions packed into a layered vanadium oxide compound to observe their short-range ordering, a domain that has proven difficult to examine. Short-range ion order was observed at different temperatures using diffuse x-ray scattering performed at the U.S. Department of Energy’s Advanced Photon Source (APS), complimented by measurements at the Cornell University Cornell High Energy Synchrotron Source (CHESS) facility. The pioneering x-ray methods developed by this research team and described in the journal Nature Materials could lead to new strategies for improving rechargeable battery performance. More generally, these x-ray techniques offer an entirely new avenue for studying structural order in crystalline compounds.

The cathode of a Na-ion battery is packed with numerous microscopic layers. When the battery is powering a device (discharging), sodium ions travel from the battery's anode to its cathode, where the ions migrate into the cathode's layers in a process called intercalation. Previous research had shown that a highly-ordered ion arrangement within a cathode's layers makes it harder for the ions to quickly move in and out, reducing battery performance.

X-ray diffraction has been extensively used to study long-range ionic order in cathodes. Standard x-ray diffraction, also known as Bragg diffraction, involves bouncing an x-ray beam off a crystalline compound at a range of angles. Sharp peaks in the resulting Bragg patterns are then used to deduce the crystal's structure. While the analysis of Bragg peaks is good at determining long-range crystalline order, it is poor at detecting short-range order. This is a major shortcoming since overall performance depends upon optimizing both long-range and short-range ionic order in cathodes. To reveal short-range ionic order the researchers in this study from Argonne National Laboratory turned to the diffuse x-ray scattering technique, which requires detailed measurements of the scattering intensity between the Bragg peaks.

Diffuse scattering arises from distortions in a crystal's lattice, such as lattice vacancies or misaligned atoms. As the name implies, diffuse scattering involves x-rays scattered over a continuous distribution of angles, which seem haphazard in comparison to the orderly reflections associated with Bragg diffraction. In comparing the two phenomena, Bragg diffraction excels at revealing the overall lattice structure of a crystalline material while diffuse scattering reveals its atomic arrangements over spans as little as a nanometer.

In spite of its unique value for revealing short-range order, exploiting the potential of diffuse scattering has always been challenging. Several recent developments, however, enabled the research team to successfully generate data of unprecedented quality. First, by employing high-energy synchrotron x-rays together with improved fast area x-ray detectors at the X-ray Science Division Magnetic Materials Group’s 6-ID-D beamline at the APS (an Office of Science user facility at Argonne) and at the CHESS A2 beamline, sufficient experimental data could be gathered in a reasonable time (20 minutes). Additionally, the researchers developed the algorithms necessary to interpret the diffuse scattering data as probability maps indicating different ionic locations. Finally, they obtained the computer resources necessary to perform the complex computations required to process the large amount of diffuse scattering data generated by the experiments.

Armed with these tools, the research team probed a single crystal of vanadium oxide (V2O5) that was partially filled (intercalated) with sodium ions. The same approach could also be applied to lithium ions. Since ion ordering within a real-world cathode is temperature-dependent, diffuse scattering measurements were obtained at temperatures ranging from room temperature to nearly absolute zero. The diffuse scattering data demonstrated that the short-range ion order followed a zig-zag configuration (Fig. 1). Lowering the temperature extended the range of ion ordering, until eventually the sodium ions were frozen and unable to diffuse through the crystal.

Revealing the short-range order of ions in layered materials is critical to developing strategies to disrupt that order and increase ionic mobility. Hopefully such strategies can be applied to actual lithium-ion and sodium-ion cathodes for improved battery performance. Beyond layered materials, the diffuse scattering techniques demonstrated in this research can also be used to investigate a large variety of disordered crystalline compounds.  ― Philip Koth