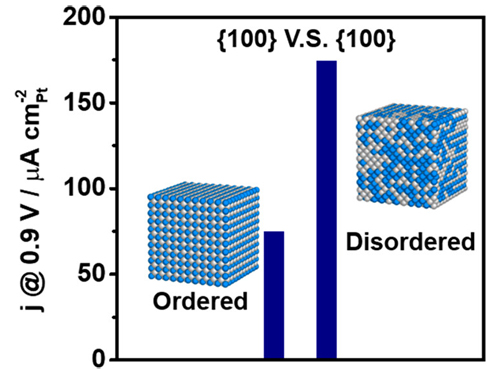 Engineers would like to develop more efficient electrocatalysts, which modify the rate of chemical reactions in various applications, such as fuel cells. But to improve catalysts, they need an understanding of the key atomic-scale factors that influence catalysis. Scientists have known that the degree of atomic order within a crystal and the exposed facets on its surface affect how active a catalyst can be, but they did not know how big a role each of these factors played. Now researchers have teased apart the individual contributions of atomic-scale ordering and faceting in one alloy, using the U.S. Department of Energy’s Advanced Photon Source (APS), an Office of Science user facility at Argonne National Laboratory, and found that the degree of ordering has an opposite impact on activity than previously thought. Their work was published in the Journal of the American Chemical Society.

In an alloy, atoms of different metals can be arranged in a regular pattern, an ordered state, or irregularly in a disordered state. Typically, the disordered state can be changed to an ordered state by annealing, i.e., heating nanoparticles of the material to greater than 500° C. But those temperatures also cause the particles to change shape, altering their facets, which has prevented researchers from separating the two factors.

To overcome this problem, the researchers, from the University of New South Wales (Australia) and the University of Saskatchewan (Canada), used an alloy of platinum (Pt) and tin (Sn), Pt3Sn, and changed the approach, turning an ordered structure into a disordered one. Tin atoms in a Pt3Sn alloy are relatively mobile, so heating to only about 200° C can trigger the ordered-to-disordered transition, without affecting the facets and particle shape. The team synthesized nanocubes with equal surfaces and highly ordered structures. They then treated some of the nanocubes with acetic acid, and thermally treated others at 200° C or 250° C. The facets of all the treated cubes stayed the same. Researchers measured the x-ray diffraction patterns of the nanocubes to discover the structure of the crystal, and found that those treated with acid maintained 95% of their atomic order, while those treated at 200° C and 250° C preserved 60% and 30% of the order, respectively.

The researchers then gauged the nanocubes’ electrocatalytic activity for the oxygen reduction reaction by measuring their current density when acting as cathode catalysts. The nanocubes with 30% and 60% order started out with the same activity level, but those that were 95% ordered had activity more than two times lower than their less ordered counterparts. Because all the nanocubes had the same shape, this suggests that the ordering, and not differences in the facets, was solely responsible for the different level of activity. The results went against conventional wisdom, as previous studies of alloys of platinum with cobalt, nickel, chromium, and iron had all found that the ordered alloys were more active than the disordered versions. In those studies, platinum is the more mobile metal and the heating that produced the order also changed the shape of the facets.

Using the Materials Research Collaborative Access Team (MR-CAT) 10-ID beamline at the APS, the team performed extended x-ray absorption fine structure studies. Those allowed them to see that the atomic disorder was caused by tin atoms migrating from within the cube to the surface. That movement creates vacancies in the crystal, which increases catalytic activity. The tin atoms on the surface are also dissolved by the surrounding electrolyte, exposing vacancies and creating more active platinum on the surface.

Not only does this work suggest that atomic disorder may play a different role in catalytic activity than previously believed, it also points the way toward exploring alloys that combine a more mobile metal with platinum. By using soft metals with platinum, instead of harder ones such as iron or nickel, scientists may be able to engineer the levels of vacancies in the material and thus enhance their catalytic activity.  ― Neil Savage

This research was ﬁnancially supported by the Australian Research Council of the Centre of Excellence in Convergent Bio-Nano Science and Technology (CE140100036), the ARC Australian Laureate Fellowship (FL150100060), and the ARC Discovery Projects (DP190102659 and DP200100143). We thank the Faculty of Engineering at UNSW for partial ﬁnancial support for this project. R.W.J.S. acknowledges ﬁnancial support from the National Sciences and Engineering Research Council of Canada. MR-CAT is supported by the U.S. Department of Energy (DOE) and the MR-CAT member institutions. We thank Joshua Wright for assistance with XAS experiments at 10-ID-B. . This research used resources of the Advanced Photon Source, a U.S. DOE Oﬃce of Science User Facility operated for the DOE Oﬃce of Science by Argonne National Laboratory under contract no. DE-AC02-06CH11357.