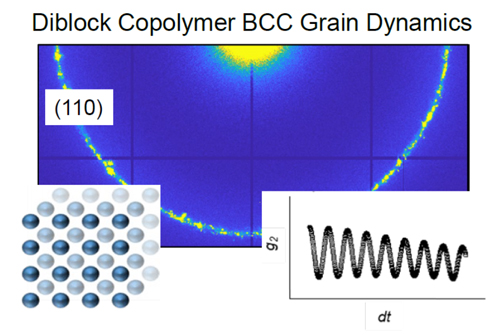 Block copolymers are a ubiquitous form of soft matter, with applications as pressure sensitive adhesives, thermoplastics, templating agents in the production of microelectronics, and as drug eluting coatings on cardiovascular stents. A defining feature of this class of polymers is their ability to spontaneously form exquisitely ordered structures with nanoscale periodicities, including micelles in compositionally asymmetric diblock copolymers that pack on a body-centered cubic (BCC) lattice. Elucidating the molecular scale dynamics that govern the properties of these materials is necessary for commercial applications but challenging due to spatiotemporal limitations of conventional instrumentation. A model poly(styrene)-block-poly(1,4-butadiene) (PS-PB) diblock copolymer was prepared by anionic polymerization and shown by synchrotron small-angle x-ray scattering (SAXS) carried out at the U.S. Department of Energy’s Advanced Photon Source (APS) to comprise spherical micelles ordered on a BCC lattice with an order-disorder transition temperature (TODT) of 153°C. at which the supramolecular crystal melts. These findings, published in the journal Macromolecules, are critical to our understanding of nucleation and growth dynamics, which underlie the desired properties and use of soft and hard materials in a variety of applications, including those mentioned above.

The team used the X-ray Science Division Dynamics & Structure Group’s 8-ID-I beamline at the APS, an Office of Science user facility at Argonne. They employed x-ray photon correlation spectroscopy (XPCS) to assess the particle scale dynamics associated with scattering from (110) planes during grain growth following rapid quenches in temperature from T > TODT to a series of temperatures between 120°C and 145°C (Fig 1). A new analytical framework was used to azimuthally split the primary scattering arc into 750 bins of detector pixels, and each bin was correlated through time. The autocorrelation functions were categorized, and dynamic information was extracted according to corresponding mathematical routines. Individual experiments were conducted in this way many times over the course of nucleation and growth of the BCC polycrystal, thus enabling a time-resolved perspective of this process. Long after the nucleation and initial growth of the polycrystalline BCC structure, we observed a temperature-independent structural relaxation mode that is associated with grain rotation during coarsening. Additionally, definitive evidence of internally referenced heterodyne correlations (see illustration inset) enabled quantitative extraction of particle speeds in these samples, ranging from 0.001 nm/s to 1.5 nm/s, which are attributed to grain boundary migration and cooperative particle movement.

The XPCS setup enabled high spatial resolution at wavevectors that were commensurate with the BCC lattice constant while providing precise temperature control, features that were specifically beneficial to this study. This work highlights the power of XPCS at the APS in revealing nanoscale dynamics in block copolymers and other ordered and disordered soft materials, while highlighting potential microstructural analogies to metallic materials with related crystalline order. The upgrade of the APS source will enhance coherent flux by 2 orders of magnitude resulting in a concomitant increase in the XPCS capabilities for studying dynamics in soft and hard condensed matter. ― Frank Bates