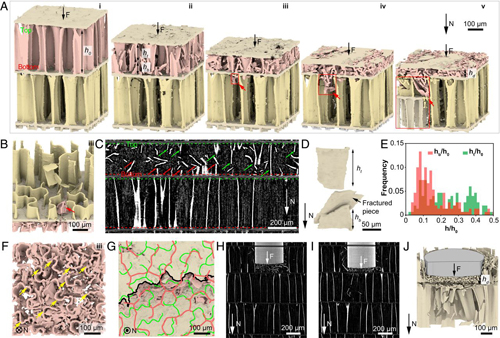 The original Virginia Tech press release can be read here.

Ling Li, professor in the Department of Mechanical Engineering at Virginia Tech University, has a lesson in one of his mechanical engineering courses on how brittle materials like calcium carbonate behave under stress. In it, he takes a piece of chalk composed of the compound and snaps it in half to show his students the edge of one of the broken pieces. The break is blunt and straight.

Then, he twists a second piece, which results in sharper shards broken at a 45-degree angle, indicating the more dangerous direction of tensile stress on the chalk. The broken chalk helps Li demonstrate what brittle calcium carbonate will do under normal forces: it tends to fracture.

In Li's Laboratory for Biological and Bio-Inspired Materials, many of the ocean animals he studies for their biological structural materials have parts made of calcium carbonate. Some mollusks use it in photonic crystals that create a vivid color display, "like a butterfly's wings," Li said. Others have mineral eyes built with it, into their shells. The more Li studies these animals, the more he's amazed by the uses their bodies find for intrinsically brittle and fragile material. Especially when the use defies that fragility.

In a study published by Proceedings of the National Academy of Sciences of the United States of America, Li's research team focused on the cuttlefish, another one of those inventive, chalk-built animals and a traveler of the ocean's depths. The researchers investigated the internal microstructure of cuttlebone, the mollusk's highly porous internal shell, and found that the microstructure's unique, chambered "wall-septa" design optimizes cuttlebone to be extremely lightweight, stiff, and damage-tolerant. Their study goes into the underlying material design strategies that give cuttlebone these high-performance mechanical properties, despite the shell's composition mostly of brittle aragonite, a crystal form of calcium carbonate.

In the ocean, the cuttlefish uses cuttlebone as a hard buoyancy tank to control its movement up and down the water column, to depths as low as 600 meters. The animal adjusts the ratio of gas to water in that tank to float up or sink down. To serve this purpose, the shell has to be lightweight and porous for active fluid exchange, yet stiff enough to protect the cuttlefish's body from strong water pressure as it dives deeper. When cuttlebone does get crushed by pressure or by a predator's bite, it has to be able to absorb a lot of energy. That way, the damage stays in a localized area of the shell, rather than shattering the entire cuttlebone.

The need to balance all of these functions is what makes cuttlebone so unique, Li's team discovered, as they examined the shell's internal microstructure.

Ph.D. student and study co-author Ting Yang used synchrotron-based micro-computed tomography at the 2-BM bending magnet x-ray beamline operated by the Imaging Group in the X-ray Science Division at the APS, an Office of Science user facility at Argonne Natoinal Laboratory. The experiment characterized the cuttlebone microstructure in three dimensions, penetrating the shell with a high-brightness x-ray beam at an energy of 27.4 keV from the APS to produce high-resolution images. She and the team observed what happened to the shell's microstructure when it was compressed by applying the in situ tomography method during mechanical tests. Combining these steps with digital image correlation, which allows for frame-by-frame image comparison, they studied cuttlebone's full deformation and fracture processes under loading.

Their experiments revealed more about cuttlebone's chambered “wall-septa” microstructure and its design for optimized weight, stiffness, and damage tolerance.

The design separates cuttlebone into individual chambers with floors and ceilings, or septa, supported by vertical walls. Other animals, like birds, have a similar structure, known as a sandwich structure. With a layer of dense bone atop another and vertical struts in between for support, the structure is made lightweight and stiff. Unlike the sandwich structure, however, cuttlebone's microstructure has multiple layers ― those chambers ― and they're supported by wavy walls instead of straight struts. The waviness increases along each wall from floor to ceiling in a waviness gradient.

“The exact morphology we haven't seen, at least in other models,” said Li of the design. This wall-septa design gives cuttlebone control of where and how damage occurs in the shell. It allows for graceful, rather than catastrophic, failure: when compressed, chambers fail one by one, progressively rather than instantaneously.

The researchers found that cuttlebone's wavy walls induce or control fractures to form at the middle of walls, rather than at floors or ceilings, which would cause the entire structure to collapse. As one chamber undergoes wall fracture and subsequent densification -- in which the fractured walls gradually compact in the damaged chamber ― the adjacent chamber remains intact until fractured pieces penetrate its floors and ceilings. During this process, a significant amount of mechanical energy can be absorbed, Li explained, limiting external impact.

Li's team further explored the high-performance potential of cuttlebone's microstructure with computational modeling. Using measurements of the microstructure made with the earlier three-dimensionsal tomography, VA Tech postdoctoral researcher Zian Jia built a parametric model, ran virtual tests that altered the waviness of the structure's walls, and observed how the shell performed as a result.

“We know that cuttlebone has these wavy walls with a gradient,” Li said. “Zian changed the gradient so we could learn how cuttlebone behaved if we went beyond this morphology. Is it better, or not? We show that cuttlebone sits in an optimal spot. If the waviness becomes too big, the structure is less stiff. If the waves become smaller, the structure becomes more brittle. Cuttlebone seems to have found a sweet spot, to balance the stiffness and energy absorption.”

Li sees applications for cuttlebone's microstructural design in ceramic foams. Among foams used for crush resistance or energy absorption in packaging, transportation, and infrastructure, polymer and metal materials are the more popular choices. Ceramic foams are rarely used because they're brittle, Li said. But ceramics have their own unique advantages -- they're more chemically stable and have a high melting temperature.

If cuttlebone's properties could be applied to ceramic foams, their ability to withstand high heat paired with newfound damage tolerance could make ceramic foams ideal for use as thermal protection units in space shuttles or as general thermal protection, Li believes. His team has been evaluating that application in a separate study.

Though the team has already begun to look up from the sea to the sky at the possibilities that cuttlebone inspires, their study of the shell's fundamental design strategies is just as important to Li.

“Nature makes a lot of structural materials,” Li said. “These materials are made at room temperature and regular atmospheric pressure, unlike metals, which can be detrimental to the environment to produce ― you need to use high temperatures and refraction processes for metals.