A Deeper Look into Bio-Inspired Catalysts 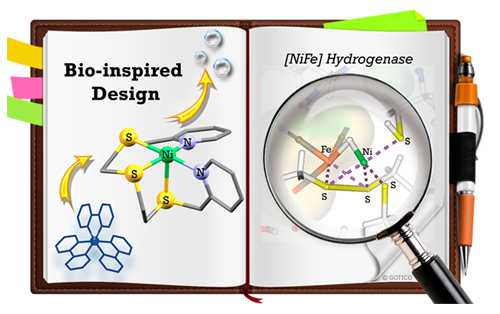 Developing hydrogen as a fuel is important for both economic and environmental reasons. This work studied the sulfur-rich environment in active hydrogenase enzymes by synthesizing nickel (Ni)-based proton reduction catalysts bearing sulfur-rich tetradentate ligands and pentadentate ligands (ligands that bind with four and five donor atoms to a central atom to form four and five chemical bonds, respectively). Photocatalytic studies with a variety of research techniques including time-resolved ultraviolet-visible spectroscopy and time-resolved x-ray absorption spectroscopy at the U.S. Department of Energy’s Advanced Photon Source (APS) revealed electronic and structural changes in the photocatalytic system. Kinetic analyses of the photo-reduced Ni species revealed differences in charge-separation dynamics; complementary techniques paved the way to a mechanistic pathway for the photocatalytic cycle. This work, published as a “Hot Paper” in Chemistry—A European Journal, advances our understanding of the charge-separation dynamics that occur in bio-inspired photocatalytic systems for the hydrogen evolution reaction. While it sheds light on the fundamental implications of catalyst-design strategies for more efficient water reduction processes, more in-depth investigations will unravel the rate-limiting steps of this artificial catalytic system and also of natural enzymatic processes.

Hydrogen is abundant, and can be produced, stored, and distributed cleanly. While traditionally CO2-intensive processes are used to extract hydrogen from fossil fuels, solar power can cleanly extract hydrogen from water. A catalyst will boost the reaction while lowering its energy requirements. The challenge is to develop catalysts that are efficient, selective, stable, and also inexpensive.

Bio-mimetic and bio-inspired catalysts imitate active enzyme sites. Hydrogenases are enzymes that can transform protons from water into molecular hydrogen efficiently. However, the use of hydrogenases is hindered because they are unstable. Artificial-enzyme mimics are easier to produce and control.

These enzymes are made of a nickel atom (cheap and abundant) surrounded by sulfur atoms, which stabilize the low oxidation states of the metal needed for hydrogen production. To mimic these characteristics, the researchers in this study synthesized artificial catalysts containing a central nickel atom surrounded by a differing number of sulfur atoms: one with two sulfur atoms and another with three. Because the number of atoms attached to the nickel are different, their coordination spheres and geometries are also different.

The researchers studied these differences to determine how they affect the enzymes’ catalytic performances. They were particularly interested in the mechanisms of photo-induced electron-transfer under catalytic conditions to determine how best to maintain efficient catalytic activity for proton reduction. To understand the rate-determining step, they studied the photocatalytic route by capturing the spectral features of the intermediate species that are transiently formed. Photo-irradiation induces important electronic and structural changes in Ni species, which can be described using x-ray-based spectroscopic techniques. The researchers used time-resolved x-ray absorption spectroscopy to collect data at the X-ray Science Division 11 ID-D x-ray beamline at the APS, together with x-ray absorption near edge structure and extended x-ray absorption fine structure analysis at XSD beamline 9-BM, also at the APS, which is an Office of Science user facility at Argonne National Laboratory.

The photocatalytic investigation of the system composed of the Ni catalyst, ruthenium photosensitizer, and ascorbate electron donor showed that the pentadentate ligand was critical for the improved efficiencies of proton reduction. This is in accordance with optical transient absorption studies that show distinct kinetic differences in the charge-separation dynamics between the pentadentate and tetradentate forms. For the pentadentate catalyst, complementary spectroscopic and density functional theory analyses revealed the transformation of the Ni (II) catalyst to a metal-centered reduced form of Ni (I)species with a distorted square-bipyramidal geometry (Fig. 1).

This first photo-induced electron transfer may not be the rate-determining step. Electrochemical characterization showed that the catalytic activity begins with the formation of a doubly reduced Ni species. This second electron transfer is likely coupled to proton transfer for the proton reduction activity. The pyridine donor in the ligand can be knocked off the metal center, providing a free base to dock a proton. Further protonation leads to a Ni (II) hydride species, which may react intramolecularly with the proton on the pyridine unit to form molecular hydrogen.  ― Dana Desonie

This work was supported by the CEA IRTELIS Ph.D. fellowship program (for P.G.), LabEx CHARMMMAT; and by the French Infrastructure for Integrated Structural Biology (FRISBI) ANR-10-INSB-05-01. D.M. acknowledges funding from the Severo Ochoa Excellence program (SEV-2016-0686) from the Instituto IMDEA Nanociencia. This research used resources of the Advanced Photon Source, a U.S. Department of Energy (DOE) Office of Science User Facility operated for the DOE Office of Science by Argonne National Laboratory under Contract No. DE-AC02-06CH11357. Beamline 9-BM-B operations were also supported by the Canadian Light Source and its funding partners.